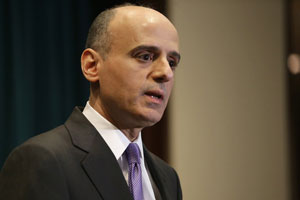 Saudi Arabia’s Foreign Minister Adel Al-Jubeir has denounced “aggressive statements” by the regime in Iran, after Tehran accused Bahrain of stoking Gulf tensions by making unfounded allegations against it.

“This is unacceptable to us,” the minister said at a joint news conference with visiting EU foreign policy chief Federica Mogherini in Riyadh on Monday.

On Sunday, the Iranian regime’s Foreign Ministry spokeswoman Marzieh Afkham accused Bahrain of making “unfounded allegations” aimed at creating “tension in the region,” after the Interior Ministry in Manama said it had detained two men accused of trying to smuggle weapons from Iran.

“This does not represent the intentions of a country seeking good relations,” Mr. Al-Jubeir said of the Iranian regime’s statements. “These statements are escalating and they are many.”

Ms. Mogherini asserted that a strong political will is required from the regime in Iran to comply with concerns being raised for regional dynamics and stability in the region. She said that Saudi Arabia and the EU share common views on regional issues, such as Palestine, Syria, Yemen and the fight against Daesh (ISIS).

“We discussed all these issues during our talks here in Riyadh,” she said.