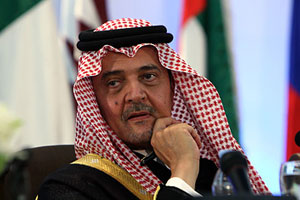 “We are not advocating war, but we are ready for it,” said Prince Saud al-Faisal during his speech at the weekly meeting of the Shura Council in the capital Riyadh.

Saudi Arabia leads a coalition of 10 countries which since Thursday has been carrying out air strikes against the Huthi rebels and their allies in Yemen.

“Operation Decisive Storm will continue to defend legitimacy in Yemen,” he said, adding that the Saudi-led military intervention in Yemen will persist until the country is stable and unified again.

The Huthis and their ally, former president Ali Abdullah Saleh, “decided with the support of Iran to destabilise Yemen and confuse the issue”, Prince Saud al-Faisal said, according to the Twitter account of the appointed advisory body.

Yemen’s foreign minister called on Tuesday for Arab ground intervention against the Houthis “as soon as possible.”

Asked in interview by Al Arabiya News Channel’s sister channel Al Hadath whether he sought Arab ground intervention, Riad Yassin said: “Yes, we are asking for that, and soon as possible, in order to save our infrastructure and save Yemenis under siege in many cities.”

Yassin also revealed that Yemeni President Abdrabbu Mansour Hadi will be officially asking to join the Gulf Cooperation Council within the coming days.