The People of Iran Expect Europe to Be on Their Side 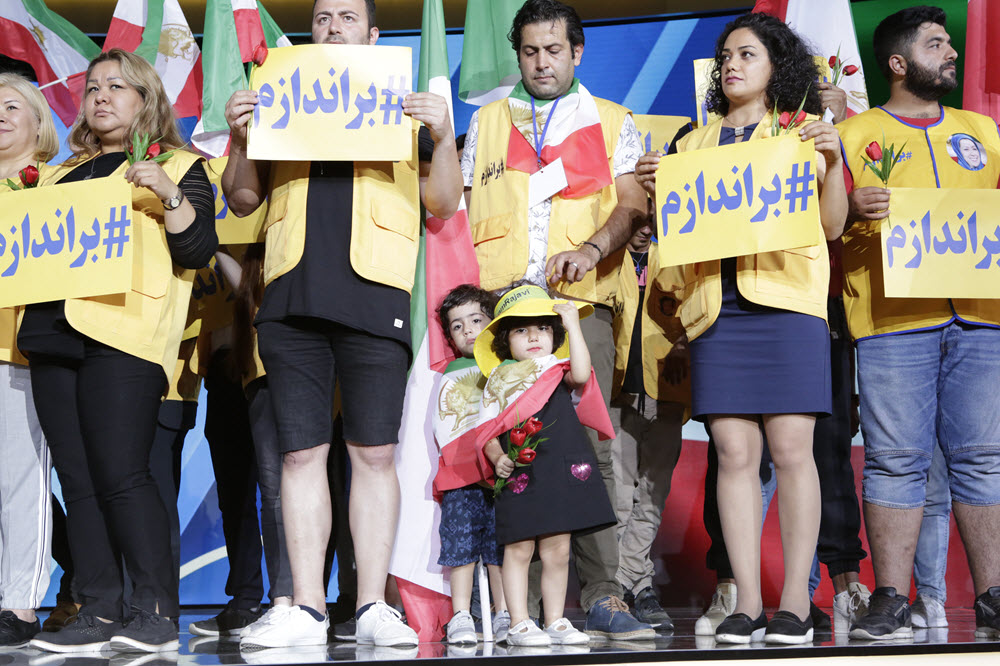 In a detailed, factual and informative article, published on UPI, July 5, 2018. Struan Stevenson the coordinator of the Campaign for Iran Change and former Member of the European Parliament, , has argued why EU should not bet on a dead horse, and follow the appeasement’s policy of former US President Barak Obama, the following is the full article.

July 5 (UPI) — Those who watched the spectacular volcanic eruptions in Hawaii in June will have seen the tremors and earthquakes that were followed by massive explosions, as great floods of molten lava burst from the ground and clouds of ash and toxic gas spiraled into the air.

This geophysical phenomenon has many parallels with the volcanic political situation in Iran, where civil unrest and repeated public tremors and protests are a clear warning of a massive eruption that is sure to happen and that will sweep the corrupt, fascist mullah regime from power.

The uprising, which began late last year and continues to this day, has shaken Iran. The nationwide protests covered all 31 Iranian provinces and 142 cities. The 80 million Iranian citizens, over half of whom are under 30, have made it clear that they are fed up with fundamentalist rule. They are fed up with living in poverty as the venally corrupt mullahs siphon off the country’s wealth to fill their pockets and to finance conflict and terror throughout the Middle East. Their chants of “death to Khamenei,” “death to Rouhani,” “death to the dictator,” “no Gaza, no Lebanon, my life for Iran, death to Hezbollah, leave Syria alone, think about us instead, death to the Islamic Republic and shame on you, mullahs,” have clearly demonstrated their hatred for the current suppressive regime and their demand for change.

Of course, the mullahs reacted to the crisis in their usual, time-honored fashion, sending in the regime’s gestapo, the Islamic Revolutionary Guard Corps, who gunned down dozens in the streets and arrested over 8,000 protesters, 14 of whom have been tortured to death in prison. But the brutal crackdown has only served to deepen public hatred of the regime and to harden resolve for its ultimate overthrow.

A typical and horrific example of the Iranian regime’s medieval approach to what they call justice can be found in the case of the 51-year-old Sufi bus driver Mohammad Salas, who was hanged on June 18. Salas was arrested around 2:30 p.m. on Feb. 19 outside a police station where thousands of Gonabadi dervish protesters had gathered peacefully to protest the persecution of the Gonabadi dervish community in Iran. The regime reacted by using a water cannon and firing live ammunition into the crowd.

During the early evening, as the protest became increasingly violent, a bus careered into a group of police officers, killing three of them. Although this happened hours after Salas had been taken into detention, the regime was desperate to find a scapegoat. Salas was brutally tortured. His fingers, ribs and teeth were broken and he was taken unconscious to hospital. When he regained consciousness, frightened and disorientated, he was forced under duress to sign a confession, which he later retracted.

Despite protests of his innocence and a massive campaign by Amnesty International, the regime hanged him from a crane last month, then took his body hundreds of miles from Tehran, where he was buried in a secret grave so that his relatives cannot have his corpse examined for signs of torture. Amnesty said that this amounted to vengeance, rather than justice.

It is time the EU condemned this brutality. It is time they adopted effective measures to compel the regime to release the prisoners of the uprising and to stop the arbitrary use of torture and the death penalty. Iran now carries out more than half of all executions worldwide and many of these involve political prisoners and people who oppose the regime.

As a former Member of the European Parliament, I am ashamed when I see the EU placing more emphasis on trade and commerce than on human rights. The people of Iran expect Europe to be on their side. They expect their calls for democracy to be taken seriously. Human rights and women’s rights cannot be compromised or marginalized on the pretext of political considerations, trade deals or the nuclear agreement. Former U.S. President Barack Obama’s appeasement policy, lamely followed by the EU, is dead in the water.

I do not see any way in which the current Iranian regime can survive. The Iranian people are no longer prepared to stand aside as the mullahs plunder their national wealth and turn Iran into a pariah state. The latest uprising has revealed the emergence of a courageous new force from within the heart of Iran’s long-suffering cities; a new force, prepared to risk their lives, to struggle for their rights and to fight for freedom and equality. This new force has, I believe, the capability of overthrowing the theocratic regime.

The bubbling miasma of nationwide protests in Iran is about to explode into a revolution of volcanic dimensions, driving the hated mullahs from power. The main democratic opposition movement — the Peoples Mojahedin of Iran and the National Council of Resistance of Iran led by Maryam Rajavi, has called for the restoration of peace, freedom, democracy, human rights, women’s rights, an end to torture and the death penalty, an end to the nuclear threat and an end to foreign meddling. Some 80 million Iranians pray fervently for that day.

{i:Struan Stevenson is coordinator of the Campaign for Iran Change. He has served as a Member of the European Parliament representing Scotland (1999-2014), president of the Parliament’s Delegation for Relations with Iraq (2009-14) and as chairman of Friends of a Free Iran Intergroup (2004-14). He is an international lecturer on the Middle East and president of the European Iraqi Freedom Association.}