Those who want secularism in Iran are ‘seditionists’, judiciary chief warns 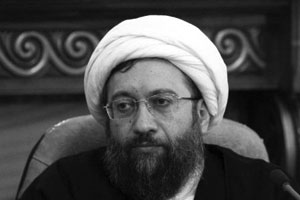 NCRI – Iranians claiming to be moderates who seek ‘western democracy and secularism’ are guilty of sedition and have no future in the regime, the country’s head of judiciary chief has warned.

Sadeq Larijani described those who took part in the 2009 anti-regime protests was ‘rising again like pythons that have been struck by the heat’.

He told a meeting of judiciary officials on July 24: “Recently, those who supported the 2009 sedition and want to secularism for the country and its policies and did not follow Imam’s (Khomeini) path, have risen again like pythons that have been struck by heat and started to move. However they are making a mistake.”

“In the past years, several groups cunningly supported the Revolution on one hand, while on the other tried their best to separate the Revolution from the main path and the Velayat-e Faqih as the main teaching of the Imam.

“All those who believe in secularism and want western democracy to substitute following the Qoran must know that the Imam (Khomeini) is the symbol of Revolution and his words and actions must be followed. These groups and people do not have a future because the country’s policy does not allow them to engage in their activities.”

‘Sedition’ is the term used by Supreme Leader Ali Khamenei to describe the uprising and protests after the presidential election in 2009.

Previous articleRenault to wind down sales to Iran
Next articleIran’s Hassan Rouhani, a wolf in sheep’s clothing