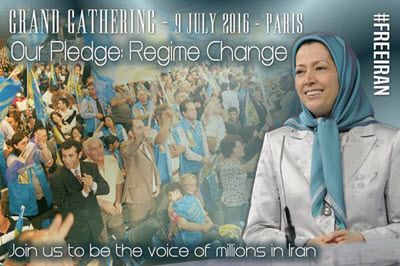 Western leaders base their engagement with Iran on the assumption that regime change is beyond reach. But many Iranian activists see things differently. The National Council of Resistance of Iran — an opposition movement and a political party — is holding its annual “Free Iran” conference in Paris this weekend. They are loudly calling for regime change in Tehran, writes Candice Malcolm in Toronto Sun on Friday July 8.

The following is the full text of the article:

The only way to make peace with Iran, according to the Obama administration, is to appease its cruel and authoritarian government.

The alternative, according to the White House, would be increased hostility and perhaps even war.

Under this dichotomy, U.S. President Barack Obama has extended an olive branch to America’s longtime adversary.

Last summer, the U.S. struck an historic nuclear deal with the Islamic Republic of Iran.

Obama teamed up with members of the UN Security Council and Germany to lift economic sanctions against Iran in exchange for Iran halting its uranium enrichment program.

The Trudeau government has followed suit, saying it will work towards reinstating diplomatic relations with Iran.

Foreign Affairs Minister Stephane Dion insists Canadian companies should be able to do business in Iran.

These self-styled “progressive” politicians are striking a deal with the devil.

By engaging with Iran, Western nations are giving legitimacy and power to a deeply regressive regime.

Iran is in the grip of one of the world’s most tyrannical and fundamentalist governments.

The mullahs that run Iran impose strict sharia law — cutting off limbs, lashing dissidents and stoning women — in a manner comparable to the brutal campaign of violence brought by the Islamic State (ISIS).

The major difference is that ISIS proudly broadcasts its atrocities while Iran conducts its behind closed doors.

And Iran has been ruling this way for decades.

Gays and religious minorities are abused and publicly executed.

As a state sponsor of terrorism, Iran antagonizes its neighbours and destabilizes the entire region through its terrorist networks.

Despite unsuccessful attempts by Western leaders to appease Iran, there is another alternative.

Or at least there may be for those who seek a more peaceful Middle East.

The alternative is regime change in Iran. But is it possible?

Obama, Justin Trudeau and other Western leaders base their engagement with Iran on the assumption that regime change is beyond reach.

The National Council of Resistance of Iran — an opposition movement and a political party — is holding its annual “Free Iran” conference in Paris this weekend.

They are loudly calling for regime change in Tehran.

Last year, over 100,000 people attended this gathering, including hundreds of parliamentarians, such as former Canadian prime minister Kim Campbell.

Resistance members can’t operate inside Iran, for obvious reasons, so they assemble in Europe and attract pro-freedom activists and Iranian ex-pats from all over the world.

This group wants more than just a change of government.

It want to transform Iranian society and enable democracy, religious freedoms, the equality of men and women, the rule of law and peace.

The party is led by a woman, Maryam Rajavi, and considers itself a parliament-in-exile.

It argues the Iranian people are far more liberal and tolerant than their theocratic leaders.

Public opinion polls suggest that, despite the anti-American rhetoric from the regime, most ordinary Iranians hold pro-Western and pro-American views.

That is why the Free Iran rally in Paris is so important.

These Iranian dissidents are clear in their message.

They want regime change in Tehran, not more appeasement from the West.

Or will they continue to legitimize the mullahs and their oppressive rule over Iran?

Previous article
Linda Chavez: Time to root out the ideology behind Islamic fundamentalism
Next article
Congressman: the Iranian regime is afraid