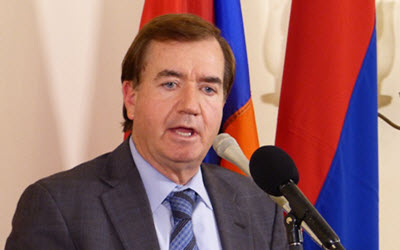 NCRI – Iran’s regime remains the “world’s leading state sponsor of terrorism and should be treated like the global menace that it is, Congressman Ed Royce (R-CA), Chairman of the United States House of Representatives Foreign Affairs Committee told a hearing on Thursday entitled “Terrorism, Missiles and Corruption: The Risks of Economic Engagement with Iran.”

Highlighting the negative effects of the Obama administration’s nuclear deal with the Iranian regime, Rep. Royce said: “When the Obama Administration was strong-arming Senate Democrats to save its Iran deal, many promises were made. Central to the White House storyline was the President’s claim that sanctions on Iran for terrorism, human rights and ballistic missiles ‘will continue to be fully enforced.'”

“But unfortunately, the Administration’s words have not matched its actions. The Administration has meekly responded to Iran’s provocative acts – thanks in part to the weak U.N. Security Council language it agreed to on ballistic missiles. And just one Iranian has been sanctioned for human rights abuses since negotiations began. One.”

“Congressional pressure may have knocked the Administration off their plans – for now – to allow Iran access to the US dollar, the world’s top currency. But the administration refuses to rule out a future move. And in the meantime, it is actively working other angles to push new investments into the Iranian economy.”

“Secretary Kerry is in Europe this week taking the odd step of reassuring foreign firms that Iran is ‘open for business.’ Other Administration officials go so far as to say that Iranian economic growth in in our national security interest. That’s a tough case to make when you consider that Iran’s Islamic Revolutionary Guard Corps has been labelled Iran’s ‘most powerful economic actor’ by the U.S. Treasury Department. That is the terrorist IRGC.”

“The reality though is that Administration pep talks to international companies to spur investment in Tehran will be viewed skeptically. For investment is like a rope. It can’t be pushed into a country that is corrupt, holds international businessmen hostage and launches missiles marked ‘Israel must be wiped out.’ Rather it is pulled into countries that are transparent, respect contracts and don’t threaten their neighbors. Banks want maximum certainty. And that just won’t be found in a country that ranks 130 of 168 on Transparency International’s corruption index.”

“Many of the restrictions left on Iran are intended to protect our financial markets from such abuse. The international organization charged with countering money laundering worldwide declared this year that it is ‘exceptionally concerned about Iran’s failure to address the risk of terrorist financing and the serious threat this poses to the integrity of the international financial system.'”

“That is why my legislation to prohibit the Administration from allowing the U.S. dollar to be used to facilitate trade transactions with Iran and which upholds Iran’s designation as a ‘primary money laundering concern’ is so key.”

“Iran is still the world’s leading state sponsor of terrorism. Until it stops funding terror, and illicit weapons programs, it should be treated like the global menace that it is,” he added.

Elizabeth Rosenberg, Senior Fellow and Director of the Energy, Economics, and Security Program at the Center for a New American Security, appearing before the Foreign Affairs Committee, said: “Policymakers should continue to forcefully implement sanctions on Iran to address its destabilizing regional role and support for terrorism.”

Juan C. Zarate, Chairman and Co-Founder of the Financial Integrity Network and a former Deputy Assistant to the President and Deputy National Security Advisor for Combatting Terrorism, told the hearing: “Iran remains the leading state sponsor of terror and has continued its direct support to terrorist proxies throughout the region, to include Hizballah’s activities in Lebanon and Syria, as well as Iraqi Shi’ite militias who have been responsible for the deaths of hundreds of Americans and are now deployed in Syria to fight for the Assad regime. This has included support intended to destabilize governments allied with the United States, with Gulf states uncovering and interdicting arms shipments for apparent use in those countries. In recent months, international naval forces have interdicted Iranian arms shipments likely headed to Houthi rebels in Yemen.”

Previous articleTeenager tortured into ‘confessing’ days away from execution in Iran
Next articleDavid Jones MP: Bombing of civilians in Aleppo is a ‘war crime’