UNSC resolution calls for end to impunity for attacks on journalists 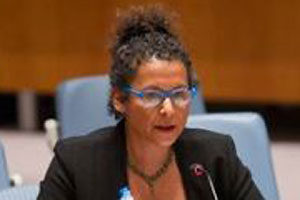 The United Nations Security Council on Wednesday condemned the frequent attacks against journalists worldwide and demanded an end to the impunity enjoyed by those guilty of violent crimes against members of the press.

The UN body unanimously adopted a resolution drafted by this month’s Security Council president, Lithuania which also calls for the release of all professionals in the field of media “who have been kidnapped or taken as hostages, in situations of armed conflict.”

Mariane Pearl, a journalist and widow of Daniel Pearl, a Wall Street Journal reporter who was beheaded by Pakistani militants in 2002, told the 15-nation council that it was “a troubled time for our profession.”

“In 2014, impunity in journalism murder cases reached a staggering 96 per cent and the remaining 4 per cent obtained only partial justice,” she said.”
“We have become targets. Insurgent groups no longer use reporters to transmit news, but instead kidnap them to make news. They treat us as enemy combatants and spies. This is our everyday reality.”

Press freedom watchdog Reporters without Borders says 66 reporters were killed in 2014, 25 since the start of this year, and more than 700 over the past decade.
Many members of the council and other UN member states cited the beheadings of Western journalists by ISIS in Syria and Iraq, as among the most heinous examples of violence against reporters.”

Deputy UN Secretary-General Jan Eliasson reminded council members that
In addition to Syria and Iraq, speakers cited the treatment of journalists in Iran which has been described as being amongst the worst offenders in holding journalists jailed.