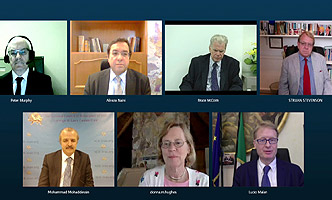 NCRI – European lawmakers, U.S. human rights experts and an official of the Iranian Resistance on Monday held a live online conference and Question and Answer session on the appalling state of human rights in Iran and the steps the international community must take in response. The participants denounced the trip to Tehran on Tuesday of European Union foreign policy chief Ms. Federica Mogherini and the failure of the European Union to speak out against the rise in the level of executions in Iran.

In the first half of 2015 alone, the regime in Iran has executed over 700 people, the equivalent of one person every seven hours. More than 1,800 people have been taken to the gallows during Hassan Rouhani’s presidency.

The panel answered dozens of questions from international journalists.

You can watch the clip of the event here