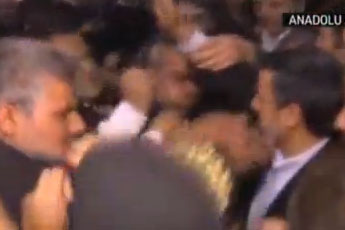 NCRI – A Syrian protestor threw a shoe on Tuesday at Iranian regime’s president, Mahmoud Ahmadinejad during his visit to Egypt.  The Syrian man threw the shoe to protest the support of Iranian regime for regime of Bashar al- Assad in Syria. Striking somebody with the sole of one’s shoe is a sign of disrespect in Arab countries.

Prior to this incident Ahmadinejad also encountered another expression of disrespect and criticism:

Ahmadinejad was harangued during his meeting with Grand Sheik Ahmed al-Tayeb at Al-Azhar, Sunni Islam’s highest seat of learning.

According to a statement released by Al-Azhar,  Ahmadinejad was criticized for Iranian regime’s role in the “spread of Shiism in Sunni lands.”  Grand Sheik Ahmed al-Tayeb also pressed Ahmadinejad to “not interfere in the affairs of Gulf states,” like Bahrain.

After the meeting,  Grand Sheik Ahmed al-Tayeb  did not attend the joint press conference with Ahmadinejad.  However an aide of Sheikh who attended the press conference repeated the same concerns. His remarks angered Ahmadinejad as the voice of his aide could be heard in Persian complaining about the remarks.

Previous articleMaryam Rajavi: Upcoming Iranian election is a “sham”
Next articleSwedish man convicted for nuclear use export to Iran