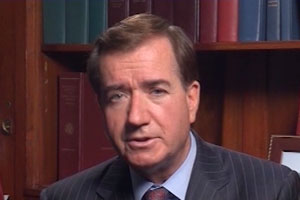 NCRI – The United States must focus as much on halting human rights abuses in Iran as on nuclear negotiations with the regime, the Chairman of the US House Foreign Relations Committee has demanded.

Iran’s president Hassan Rouhani is also not a moderate but a ruthless extremist responsible for the summary executions of hundreds of innocent civilians, Ed Royce told a gathering of Iranians in Paris on June 27.

Mr Royce said in a video message to the conference: “The Iranian regime continues to involve itself in serious human rights abuses on a very large scale.  Tehran is on pace to surpass the number of executions without due process from last year. This is under President Rouhani.

“I think we should remember that this is a man who called on the regime’s Basij militia to ‘crush mercilessly and monumentally’ the student protesters.  More than a dozen students were killed in the protests of 1999, more than a thousand were arrested, and several hundred were tortured.

“He is the man who appointed, as Minister of Justice, a person responsible for the summary execution of scores of people in the late 1980s without trial or due process.

“Rouhani is a creature of the regime, pure and simple. That is why we should be speaking out against these abuses.  It is our moral responsibility to show Iranians that we are concerned about what happens to them, as human beings.”

But he said he feared US president Barack Obama’s administration was more focused on Iran’s nuclear program, as torture rape and executions continue in Iran.

He added: “Of course, Iran’s nuclear program is a paramount national security concern.  But a focus on the Iranian regime’s militant character is just as critical to US security interests.  How the regime treats its people is a pretty good indicator of how it’s going to treat its neighbors.

“If Iran and the P5+1 come to an agreement next month that allows the regime to retain much of its critical nuclear infrastructure in place, the Obama Administration will essentially be trusting the a regime that holds the noose in one hand to hold the keys to a nuclear bomb in the other.

“And in doing so, they will again fail to grasp the concept that promoting human rights, promoting democracy in Iran and improving our national security, in fact, go hand-in-hand.”