Why Is Iran Regime Concerned About Venezuela? 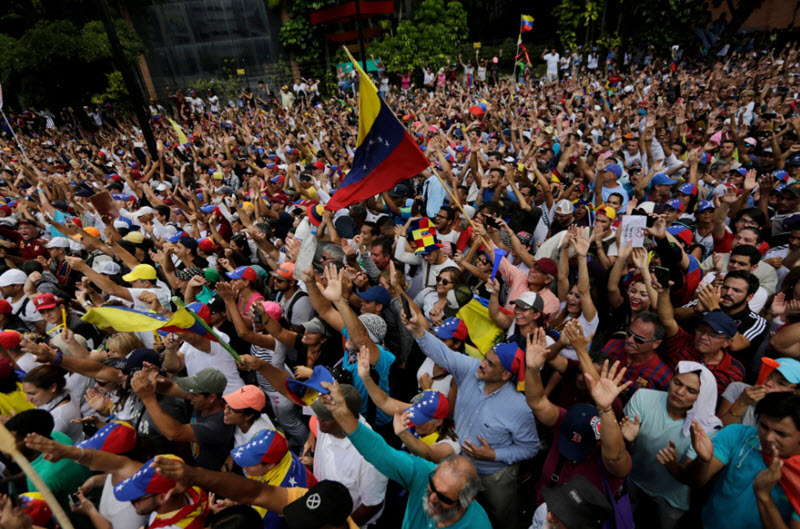 The state-run media in Iran has been filled with the Regime’s concerns over the international community’s reaction to the current situation in Venezuela and what this could mean regarding the future of the Iranian Regime.

The Daily Politics newspaper claimed on January 27 the European Union’s support of the Venezuelan people is tantamount to “supporting the toppling of this country’s government” and shows that the EU stands with the United States. The paper used this as an excuse for why Iran should not pass the international anti-money laundering and anti-terrorist financing bills that the international community have told them to, as the anti-money laundering body is clearly just going along with the US’s objectives.

The report read: “These measures once again teach us this lesson that relying on institutions such as the Financial Action Task Force (FATF), Palermo and counter-terrorism financing (CFT) cannot resolve the country’s problems. These institutions were never independent and have no agenda but to go in line with the ruling state.”

The reality, of course, is that Iran knows that financing terrorist groups are how they stay in power, so they are desperate for any excuse not to pass them, even if it doesn’t make sense.

Why are the mullahs scared of the fall of the Venezuelan regime?

Simply, because the Iranian Regime remains in power because it has managed to suppress its people for 40 years, so they seek to prevent other Regime’s from falling because it shows the Iranian people that they can rise up against the mullahs. That’s why Iran has squandered billions of dollars propping up the Assad Regime in Syria since 2013.

The Daily Politics newspaper tried to disparage the US policy of supporting the Venezuelan people in their quest for a free country, by pointing out that the US has imposed widespread sanctions on the country, and claiming that the US’s intention was to cause economic “chaos”. It then goes on to say that the US has also imposed sanctions on Iran and continue to increase international pressure on the country, whilst denying that regime change is their objective.

But the report fails to note that the policies of the regime in Venezuela, including harsh human rights violations, are the cause of the uprising and it is the people who are calling for regime change, not the US. The same is also true with Iran.
The paper complains that Europe has recently started raising the issue of Iran’s missile capabilities – after Iran has on multiple occasions violated a UN resolution calling on it not the test any ballistic missiles and bragged about restarting its nuclear programme, in violation of the 2015 Iran nuclear deal – or described Iran as a threat – after several instances of Iran plotting terrorist attacks or assassinations in Europe in 2018 alone.

The Iranian Regime doesn’t care who runs Venezuela; only how much longer they can continue ruling Iran.