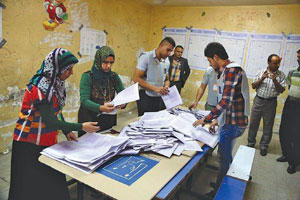 By Struan Stevenson
There is growing concern that 9 days after the Iraqi elections no results have been posted, with government sources claiming that no announcement will be made until the end of May. Political leaders in Iraq who have already expressed dismay at widespread vote rigging during the elections, now fear that further backstage manipulation of the results is taking place in an attempt to secure a third term for the deeply unpopular and autocratic Nouri al-Maliki.

There is also extensive skepticism about the alleged 62% turnout at the elections, given the background of rising violence in Iraq and the genocidal campaign being waged against the Sunni population of Anbar Province. With vicious barrel bomb attacks on schools and hospitals in Fallujah and Ramadi, and breached dams leaving more than half of Abu Ghraib district under water, many political leaders think that a 62% voter turnout is a fiction.

Now Ayad Allawi, leader of al Iraqiya, has said that 2 million ballot papers are missing, raising deep suspicions that major electoral fraud has taken place. News that all Iraqi police and army personnel were issued with two ballot papers each, one in their camps and the other sent to their homes, has compounded fears that the election was rigged.

The Iranian regime, which regards Maliki as their pliable puppet, is putting pressure on different political factions to support him for a third term as prime minister. For the mullahs in Tehran, a non-sectarian, fully democratic government in Baghdad would be anathema and they are pressing ahead with their determination to secure another 4 years of authoritarian Shiite domination of Iraq, with the strings being pulled by Tehran. The presence of Iranian-backed militias in the bloody campaign in Fallujah and Ramadi are visible signs of this interference.

The conclusion must be that this election – the first to take place in Iraq since the withdrawal of American troops – has been significantly corrupted to the point where the result, when it finally emerges, will almost certainly be fraudulent. There seems little doubt that hundreds of thousands of people were deprived of their right to participate in the 30th April elections due to violence and intimidation, rendering this the most undemocratic election of the post-Saddam era.

The UN, US and EU should intervene and declare that this was not a free and fair election. They must not stand back and wash their hands of this affair. The people of Iraq have suffered enough. They need a democratic election that will provide them with a government that can restore freedom, democracy, justice, human rights and women’s rights to Iraq. Four more years of corrupt dictatorship by Maliki will be in no-one’s interest.

Struan Stevenson MEP, is President of European Parliament’s Delegation for Relations with Iraq