New reports and footage posted tonight, indicate that people in Tehran, Andimeshk, Omidiyeh and Shahre-Rey have taken to the streets and are chanting slogans against the regime in solidarity with the people of Abadan.

May 28 – Minoo Island, southwest #Iran
Locals are in the streets demonstrating in solidarity with #Abadan.pic.twitter.com/YH1sKzLX9N

May 28 – Tehran, #Iran
Fallah district
People gathering in solidarity with #Abadan were attacked by the regime's oppressive security forces.pic.twitter.com/OZin8C6A5c

May 28 – Behbahan, southwest #Iran
Locals are in the streets rallying and mourning in solidarity with the people of #Abadan who saw at least 28 people die in the May 23 collapsing of the city's 10-story Metropol tower.pic.twitter.com/09C1C3UbsS

Mino Island- traditional mourning in solidarity with the people of Abadan

Qom- traditional mourning in solidarity with the people of Abadan 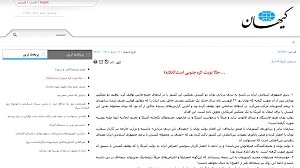 Following the latest international dispute between Greece and the Iranian regime concerning the seizure of oil tankers, the Kayhan newspaper whose editorial guidelines are directed by the Supreme Leader’s office called on the regime’s navy and the IRGC to hijack South Korean tankers to extort this country into releasing its frozen funds.

In a column that was published on May 27, Kayhan’s editor-in-chief Hossein Shariatmadari wrote: “Fortunately, the esteemed officials of our country have come to the conclusion that summoning foreign ambassadors and mere diplomatic protests will be in vain. Hence, they have seized two Greek tankers. A licit action based on the “right of retaliation” which is an inalienable right of our country. Under the 1958 Geneva Convention and the 1982 Jamaica Convention, which deal with the ‘legal system of international waterways and the right of passage of ships’, if Iran sees its national interests at stake, it has the right and can close down the Strait of Hormuz to all oil tankers and even ships carrying commercial goods and weapons of the countries that have violated the national and legal rights of our country.”

“It is now expected that the Islamic Republic of Iran shall block the Strait of Hormuz on tankers and vessels carrying South Korean commercial goods, and not to allow its vessels to cross the Strait as long as it has not paid its $7 billion debt to Iran, Shariatmadari added. 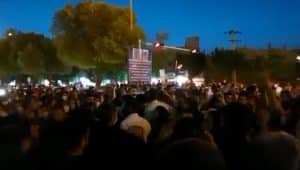 Thousands of people took to the streets in several cities of Iran on Friday night, May 27, in solidarity with the people of Abadan in southwest Iran, holding demonstrations and chanting anti-regime slogans. According to videos posted online from these demonstrations, the cities of Bushehr, Mahshahr, Shahin Shahr, Ahvaz, Omidiyeh, and Abadan were scenes of these anti-regime demonstrations. On the fifth night after the tragic collapse of a ten-story tower in Abadan that led to the deaths of dozens of people, including many women and children, the people of Iran continued their anti-regime protests in dozens of cities in Khuzestan and other provinces.

Thousands of people demonstrated in Abadan, Ahvaz, Khorramshahr, Behbahan, Omidieh, ‌Baghmalek, Sarbandar, Mahshahr, and dozens of villages in Khuzestan on Friday, May 27, 2022.