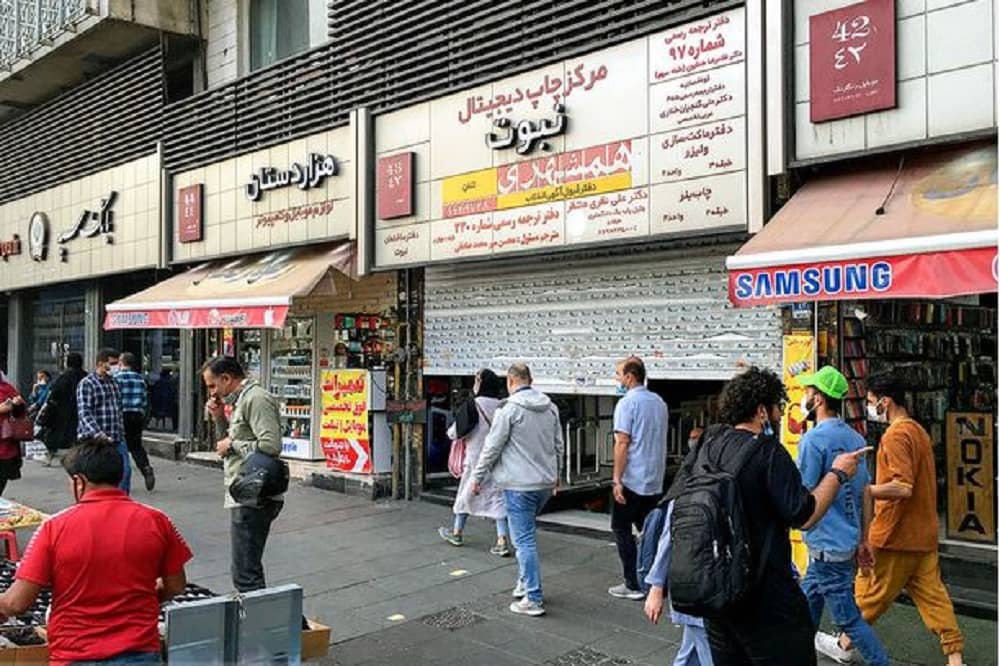 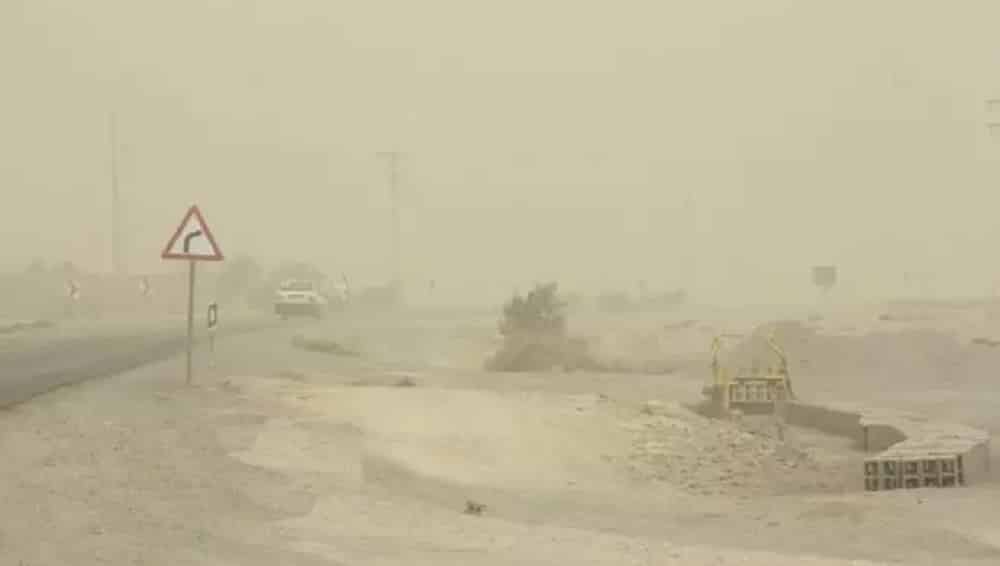 According to the latest reports, 6 Iranians have lost their lives and 122 others have been injured as a result of Hurricane Shahin hitting hard at Sistan and Baluchestan province.

The deputy director of the Iranian regime’s fisheries department in Sistan and Baluchestan announced that five fishermen have been missing and no information is available on their whereabouts. 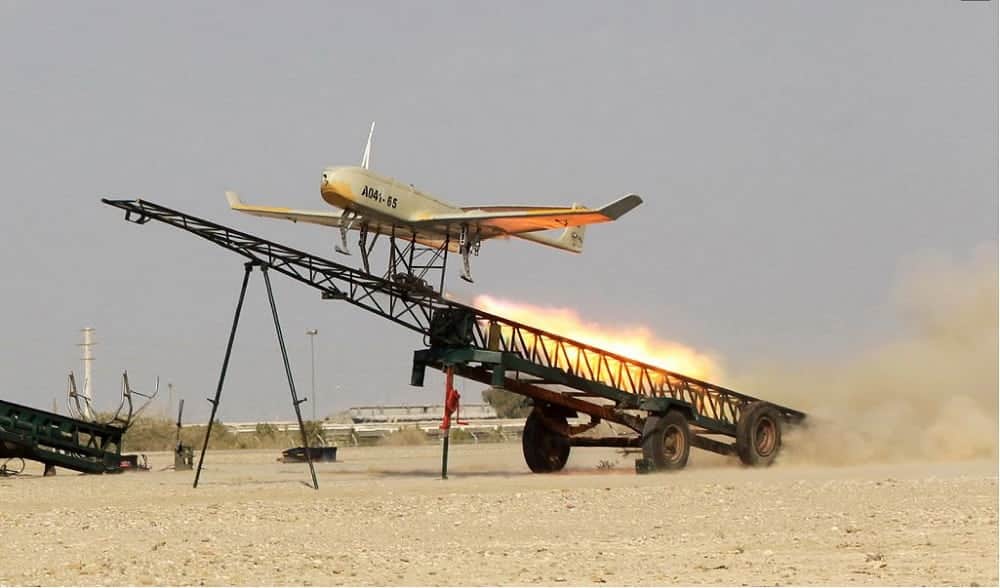 Deir Ezzor province: SOHR sources have confirmed that the Iranian Revolutionary Guard Corps (IRGC) started training courses for IRGC-backed local militiamen on the use of drones in al-Mayadeen city in the eastern countryside of Deir Ezzor. According to SOHR sources, 25 local recruits, divided into five groups, have joined the training course which is held under the supervision of Iranian officers in al-Mazare’ area, as each group has one drone to be trained on.

Rivalry and Blame Game with People’s Lives at Stake

As Ebrahim Raisi and factions loyal to the supreme leader Khamenei try to pose victorious battling the pandemic and blame the previous government for the failures and the high death toll, newspapers that are funded by their rival faction prove otherwise.

The state-run ‘Setareh Sobh’ newspaper wrote: “Celebrating vaccinations is just misleading and demagogic. Those who have been vaccinated with Sinofarm and Barakat (a domestic vaccine) are having trouble traveling to other countries.”

The state-run Jahan-e-Sanat newspaper also wrote: “The Islamic Republic is one of the few countries that has always used propaganda and political exploitation from the very beginning of the Coronavirus outbreak in the country.”

On January 8, 2021, Ali Khamenei banned the import of WHO-approved Covid-19 vaccines from the U.S. and the U.K., and accordingly, Hassan Rouhani, the former president, and his healthcare minister and officials obeyed and actively defended the decision.

This morning, teachers and retired personnel of the Ministry of Education rallied in protest of their work and living conditions in the cities of Tehran, Ahvaz, Isfahan, Shiraz, Khorramabad, Qazvin, Kermanshah, Rasht, Darab, Zanjan, and Kerman.

On Sunday, for the sixth consecutive day of their strike, workers of Hafttappeh Company marched through the market of Shush as well as in front of the regime’s governorate building. The workers want their due wages paid, their fired colleagues returned to work, the contracts of seasonal workers and those in the pest control section extended, as well as the cultivation operations and factory repairs executed.

Also, a group of Khorramshahr municipal workers gathered in front of the governor’s office to protest the official’s refusal to pay their five-month due wages.

Workers of the Pabdana Coal Mine Company in Kerman Province held a rally at the entrance of their compound. These workers demand equal salaries and benefits in all parts of their workplace and they reject discrimination.

A group of families with SMA patients gathered in front of the regime’s parliament and demanded the import of medicine for this disease. 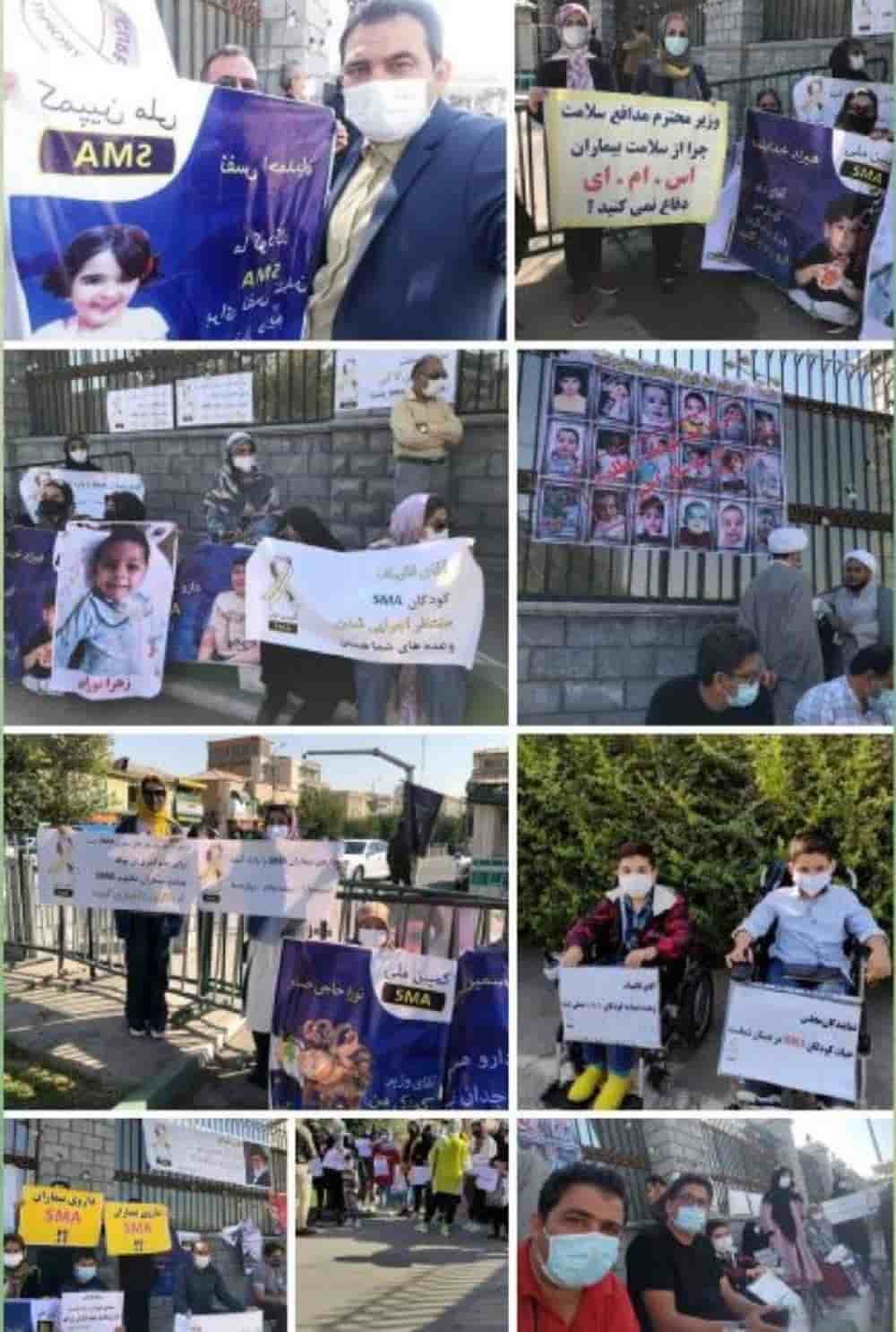 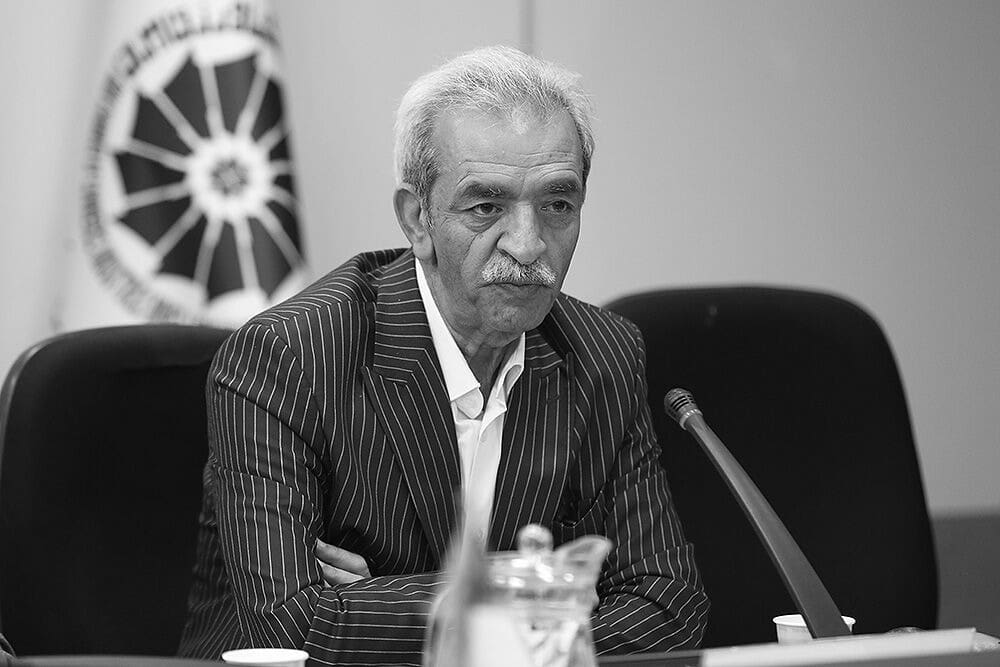 Shafeei was referring to the preferential trade agreement between the Iranian regime and Turkey, that came into force on January 1, 2015. According to the agreement, 140 items of Iranian exports, including agricultural items, fisheries, and food, as well as 125 items of Turkish exports, including industrial products, are covered by customs tariff reductions.

The term “Turkmenchay Treaty”, refers to the treaty between Tzarist Russia and Iran signed on February 21, 1828, where large parts of Iran in the South Caucasus were provided as concessions to the Tzar by the Shah of Ghajad dynasty. 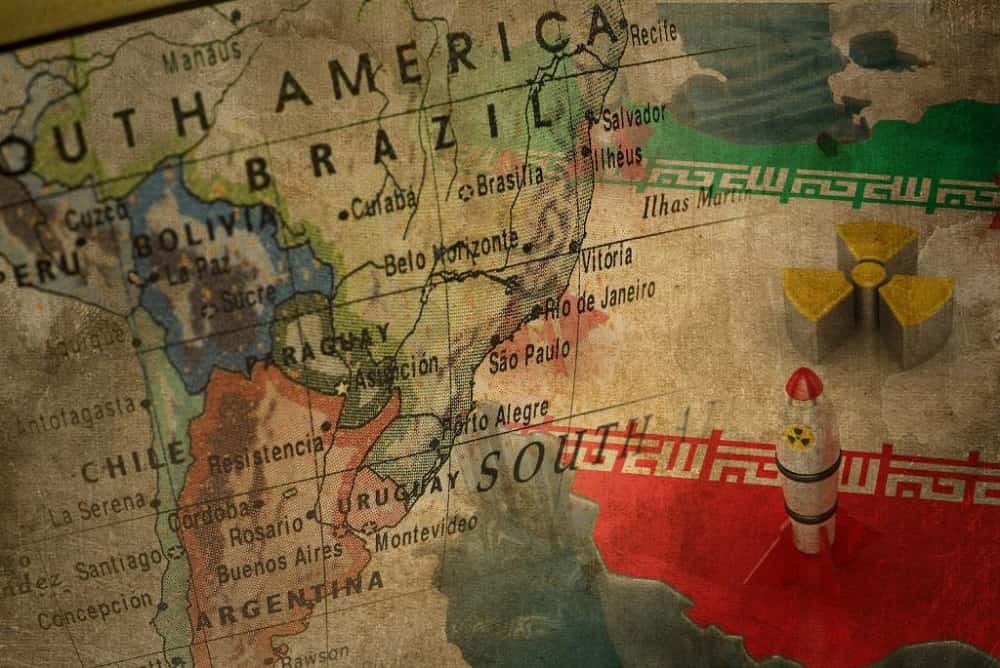 An unprecedented operation involving 15 international security agencies has exposed an Iranian terror infrastructure that was planning a series of assassinations against Israeli and Western targets around the world. 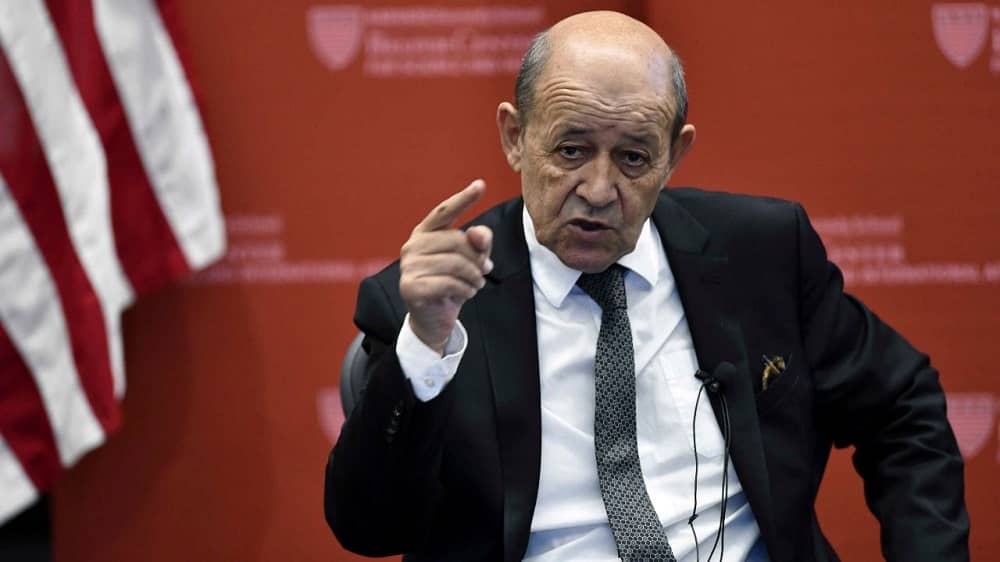 Siyasat-e Rooz newspaper wrote on Sunday: “While France is trying to retaliate the $90 billion cost of the US-British agreement to build a nuclear submarine for Australia, this coincides with media reports about the French foreign minister’s imminent visit to Saudi Arabia, and telling a Saudi network that regional talks with Iran should also include the country’s missile activities.”

Kayhan newspaper whose editorial guidelines are dictated by the supreme leader’s office, also wrote: “In a brazen statement, the French foreign minister claimed that regional talks with Iran should also include the country’s missile activities… As for the French foreign minister’s rude remarks about the negotiations over Iran’s defense capabilities and regional powers, these cases are by no means negotiable… No honorable and independent country is willing to auction off its defense and military capabilities.”

In an interview with Al Arabiya, French Foreign Minister Jean-Yves Le Drian had warned the Iranian regime that the window of negotiations would not remain open forever and that the Iranian missile program needs to be addressed in any regional talks with the regime. 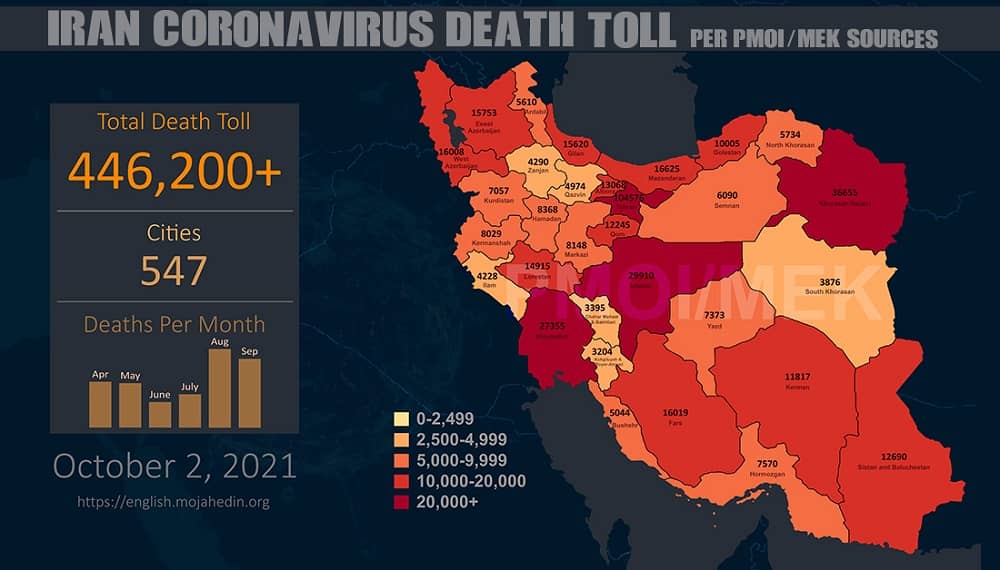 More than 446,200 people have died of the novel #coronavirus in 547 cities checkered across all of Iran's 31 provinces, according to the Iranian opposition PMOI/MEK. 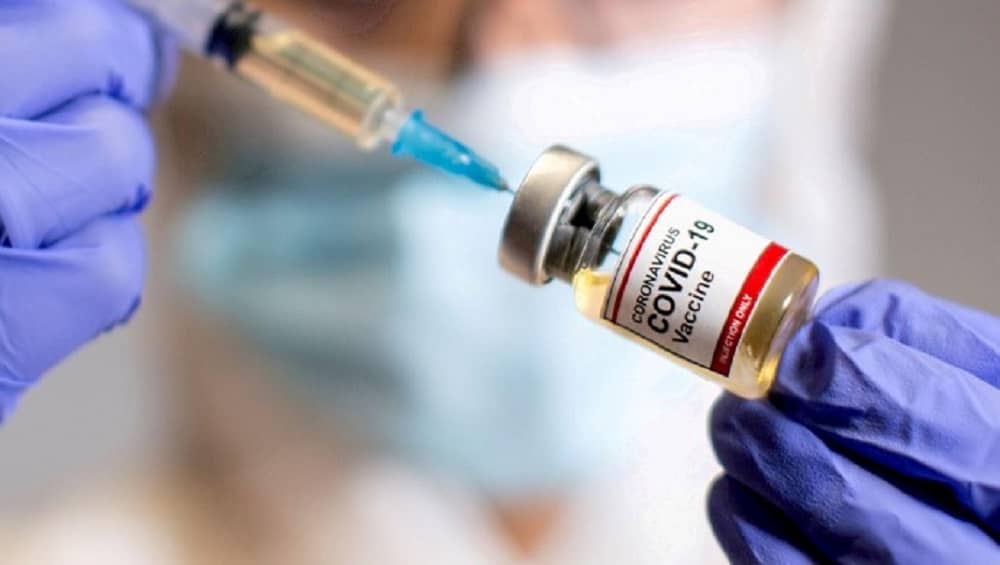 On Wednesday, the Iranian regime’s health ministry made the sudden announcement that “there is no decision to import Pfizer vaccines from any country.” This statement is in contrast to previous remarks by regime officials that 2 million doses of Pfizer vaccines would be imported from Belgium, per the state-run Tasnim News Agency on September 22.

Iranian Cleric: Coronavirus Is a Misunderstanding 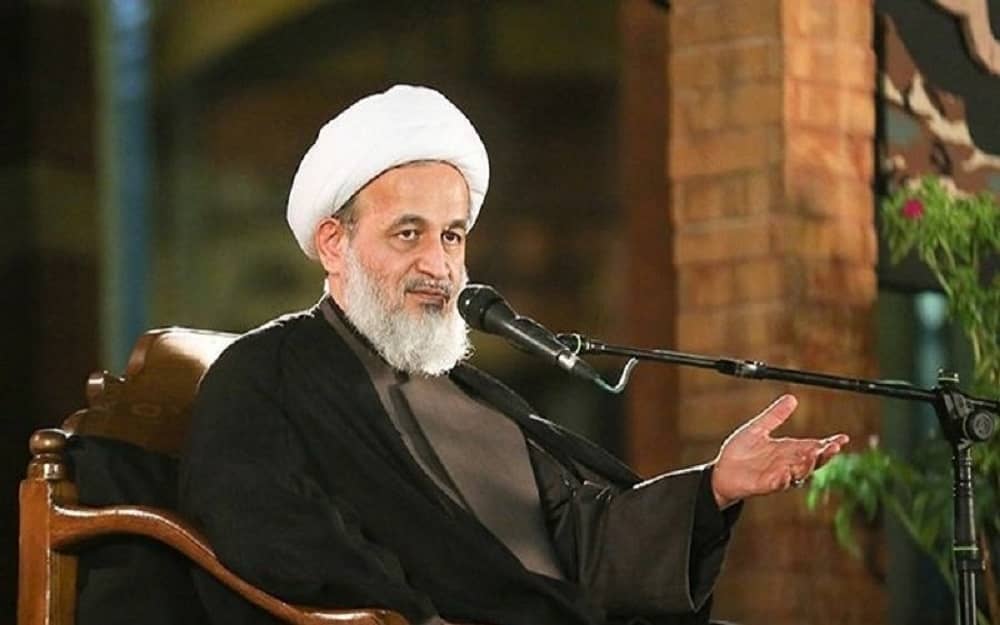 Iranian cleric Alireza Panahian this week said: “The discussion also began with prayers or treatment, which now led to the discussion of coronavirus etc., inshallah, which I hope and while some of the symptoms are available, the whole coronavirus incident is a big misunderstanding.” 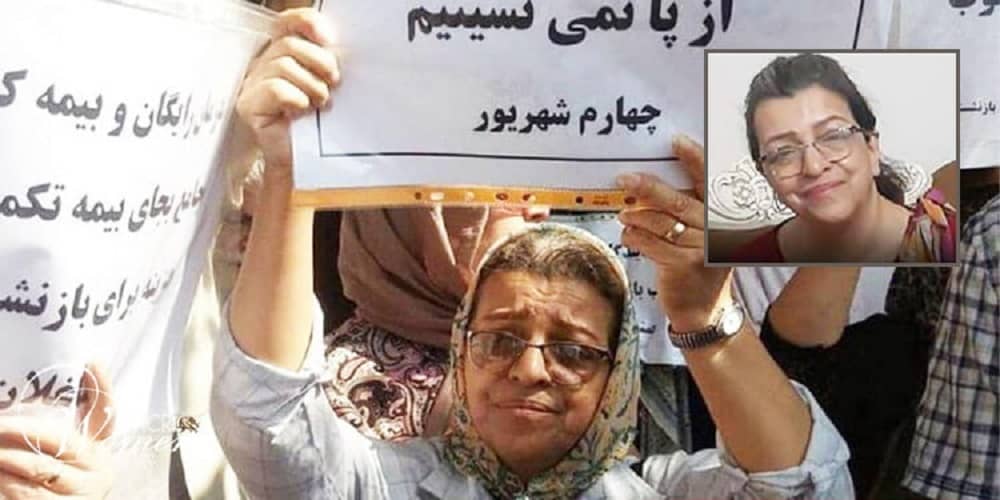 Tehran’s Revolutionary Court summoned Ms. Mahboubeh Farahzadi to report by October 2, 2021. Mahboubeh Farahzadi is a teachers’ rights activist and a member of the Voice of Iranian Women Association (Neda-ye Zanan-e Iran). The Revolutionary Court of Tehran summoned the retired teacher by phone. She was supposed to report in by 9 a.m. October 2, 2021.