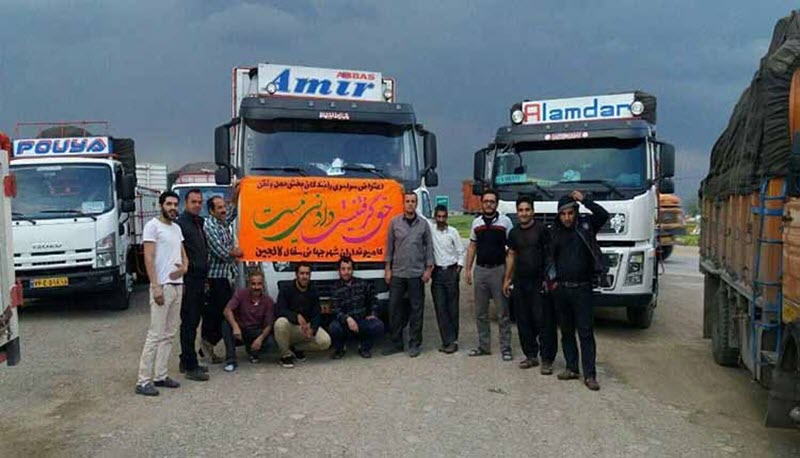 On September22nd, truck drivers in Iran announced a new wave of strikes. More than 250 truck drivers across almost 20 provinces have since been arrested. Those that are being held by Iranian authorities have been told that they will face harsh penalties with some being threatened with the death penalty.

Since the end of last year, the people of Iran have been holding protests and anti-government demonstrations across the whole country. Momentum has been maintained and the people are very clear in their demands for regime change. People have been heard calling for “Death to Rouhani” and “Death to the Supreme Leader” – slogans that before now would never have been heard.

The Iranian regime has become increasingly worried about the scale of the protests and has launched a further crackdown on protesters. Mohammad Jafar Montazeri, Iran’s General Prosecutor, recently said that the truck drivers that were detained should be treated harshly. He has described the protests as an offence that could warrant the death penalty. More than a dozen of the detained truck drivers have been charged with “disturbing public order” and “creating insecurity”. Ghazvin Prosecutor Mohsen Karami advised that they are handed the death penalty.

The International Transport Workers’ Federation (ITF) has strongly condemned the Iranian regime’s detention of the truck drivers and said that the death penalty being issued for the act of participating in a strike is “inhumane and unthinkable”. It highlighted that the truck drivers are taking action because they are struggling to provide for their families. The ITF also urged the government of Iran to listen to the demands made by the truckers and said that solutions must be provided – not threats of execution.

One of the most pressing demands of the truckers is with regards to the tyre shortage. Iranian authorities have said that the situation has been resolved but it appears that this is not true. Ahmad Karimi, the head of the Truckers’ Guild Association said that the market needs 350,000 tyres, but so far only 50,000 had been distributed. Mr. Karimi also said that tyres have no fixed prices on the market meaning that the tyre makers and representatives can set the price at whatever they like.

The Truckers’ Guild Association provided a list of 15 demands when it made a call to strike a few weeks ago. Some of the most pressing issues include the value of their pensions and the treatment of officers who demand bribes from truck drivers. They also called for a lowering of the price of spare parts and tyres and called for insurance premiums to be made more affordable. The association also said that go-betweens should not be allowed to operate at terminals.

The Iranian regime, as it does with numerous social issues, fails to acknowledge that a problem exists and often shirks responsibility. It is not out of character that the Iranian regime threatens striking truck drivers with execution rather than working towards a resolution. It is this precise nature that has forced the people into calling for regime change.