Workers, Students and Other Social Sectors Protest Across Iran 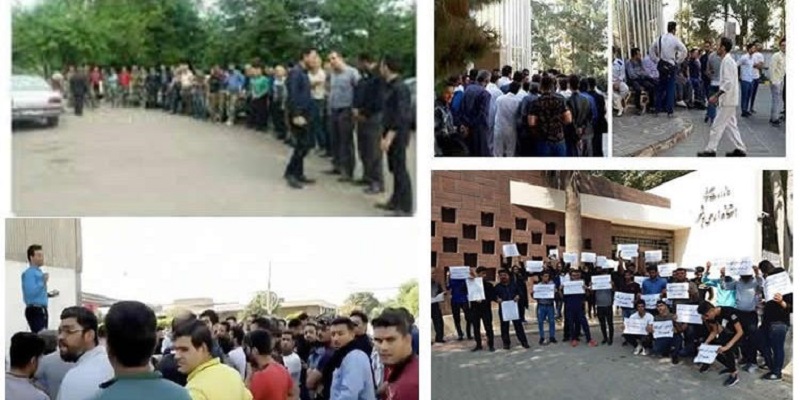 Written by Mahmoud Hakamian on 29 September 2019.

Anti-regime protests by various social sectors are on the rise in Iranian cities.

On Saturday, September 28, protests took place by workers at the Haft Tapeh sugar cane industries, medical students in Tehran, coin investors of Thamen Company, swindled investors of the state-affiliated Caspian and Ayandeh banks, environmentalists in Tabriz and angry citizens of Yort Sheikhan village who put up blockades on the roads.

On September 28 students of “Beheshti” Medical Science University gathered in front of the Ministry of Health. The students protested against the nomination of a certain Mirzaye Razzaz as president of the Nourishment Faculty. He has been engaged in suppressing student’s movements in the past; the protestors asked for his removal.

In protest to foot-dragging by authorities for providing speed-reducing bumps on the Gonbad – Kalaleh road, Yort Sheikhan village citizens blocked the road. The village is situated six kilometers away from Gonbad Kavoos in Golestan province. The population misses no opportunity to express anger against the rulers.

Protest by environmentalists in Koujovar district of Tabriz

Environmentalists of the Koujovar district of Tabriz organized a march on Friday, September 27 in protest to the authorities’ lack of attention to the environment and pollution of Tabriz’ air caused by big chemical industries, refineries, petrochemical industries, and the Polinar factory as well as the recent extension of such facilities. Koujovar district is a historic district of Tabriz with a population of 6000 in Iran’s Eastern Azerbaijan Province.

Upon previous calls, swindled investors of the Thamen Coin Company marched on Saturday, September 28 in protest to the plunder of their money before gathering in front of the Justice Department in Keshavarz Boulevard in Tehran. They shouted: “What has been done with our money behind the scene, we are the swindled Thamen investors, and we will not abandon our rights.”

Similar protestors who had invested in the state-affiliated Ayandeh bank and Caspian Credit institute had also announced a similar gathering in front of the Justice Department, but the groups were separated by the authorities given a large number of people participating.

Gathering of employees of the Forestry and Pasturage Organization in Tehran

A number of employees of the Forestry and Pasturage Organization gathered in front of the regime’s parliament to protest against the months-long hindrance of wages’ payments. Most of the protestors are employed on wages under the minimum legal wage.

Those gathered protested against the non-payment of their wages for several months under current difficult economic conditions.

“Although wages of the majority of those gathered is under the legally permitted fee set by the Ministry of Labor, the same under-paid employees have to wait several months before being paid,” said one of the protesters who has a BS in Agriculture. “This comes at a time when refurbishing the new office of the esteemed president of the Forestry and Pasturage Organization has cost several hundred million.”

Another protest on Thursday, September 26 was that of the family and friends of a 20-year-old youth announced brain-dead due to delays and absence of surgery. Those gathered had panners reading “Forget about cures; just don’t kill,” “Khalij-e-Fars is not a hospital, it is a killing field.”

The youngster had a car accident and was dully transferred by the people to the hospital, but the lack of specialist surgeons and the incompetence on the part of employees resulted in his death. The population considers the sad event as a result of corruption on the part of those in control of the Health Ministry.

Workers of Pajen Dairy Products in Nasimshahr gathered in front of the Manager’s Office in protest to the lack of response to their demands.

Engulfed in internal and international and regional crisis, the medieval dictatorship in power in Iran has no solution for the people’s difficulties other than repression.