Day 22 of the Iran Protests for Regime Change 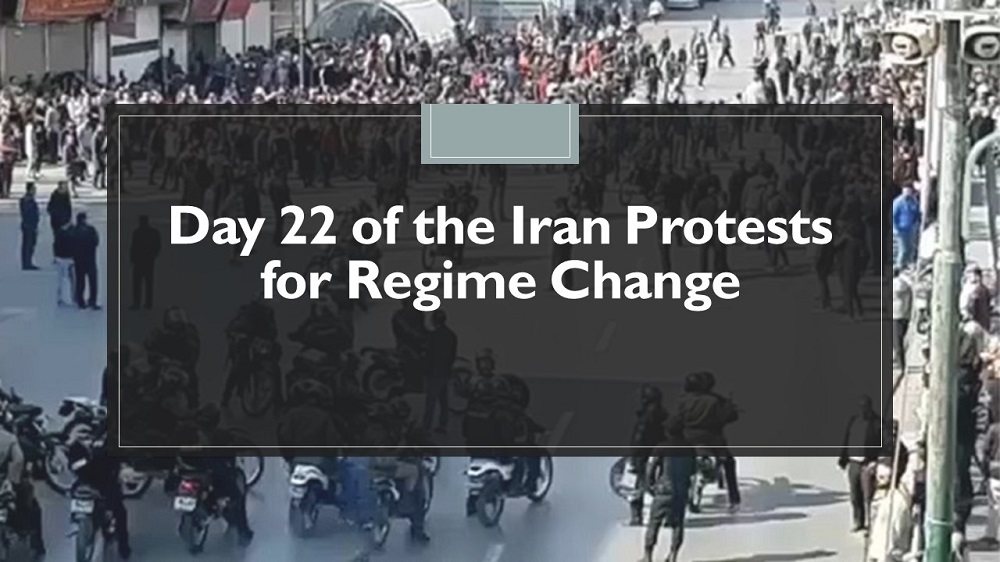 Day 22 of the Iran Protests for Regime Change

Friday marks the 22nd day of the nationwide Iran protests for regime change. The Iran protests which began on November 15 have targeted the entirety of the religious dictatorship ruling Iran, led by Supreme Leader Ali Khamenei and President Hassan Rouhani.

The protesters demand the overthrow of the regime with all its factions and the corrupt repressive forces, including the Revolutionary Guards (IRGC). On day 22 of the protests, reports by the network of the People's Mojahedin Organization of Iran (PMOI), also known as the Mujahedin-e-Khalq (MEK), inside the country indicate more than 1,000 protesters have been killed, 4,000 wounded and 12,000 arrested. Anti-regime demonstrations have taken place in more than 189 cities across the country.

Mrs. Maryam Rajavi, President-elect of the National Council of Resistance of Iran (NCRI), called on the international community to halt the Iranian regime’s crimes against humanity.

Reporting by PMOI/MEK Iran, November 2019—New footage received from Iran after the internet shut down. Security forces in Javanrud directly fire at protesters from the local judiciary. The protests began after the gas price hike in 189+ cities in Iran.

Iran Protests: Releasing Another 30 Names of the Martyrs of the Iranian People’s Uprising

The People’s Mojahedin Organization of Iran (PMOI/MEK) released the names of another 30 martyrs of the Iranian people’s uprising, bringing to 350 the number of victims who have been identified so far.

The number of martyrs of the nationwide uprising that engulfed 189 cities exceeds 1,000. Several children and minors are among the martyrs.

Mrs. Maryam Rajavi, President-elect of the National Council of Resistance of Iran (NCRI), hailed the uprising’s heroic martyrs, and called on the United Nations Security Council, the European Union and its member states to condemn this horrendous mass killing by the Iranian regime and to take urgent action to stop this crime against humanity and secure the release all those arrested.

#IranProtests: Releasing Another 30 Names of the Martyrs of the #Iranian People’s Uprising https://t.co/oh0XPs6onl#Iran #MEK #StopIranBloodshed

Maryam Rajavi president-elect of the NCRI wrote on twitter:

This uprising will continue until freedom and democracy are established in Iran. A free and democratic Iran is not only the urgent desire of the people of Iran but is essential for peace and security in the Middle East and the world.

This uprising will continue until freedom and democracy are established in #Iran. A free and democratic Iran is not only the urgent desire of the people of Iran but is essential for peace and security in the Middle East and the world. #IranProtests pic.twitter.com/ljMRTLb4JB

GENEVA (6 December 2019) – As more information gradually filters out of Iran in the wake of the recent protests, the UN High Commissioner for Human Rights Michelle Bachelet on Friday expressed alarm at the continuing lack of transparency about casualties and the treatment of thousands of detainees, as well as continuing arrests reported to be taking place across the country.

At least 7,000 people have reportedly been arrested in 28 of Iran’s 31 provinces since mass protests broke out on 15 November, and the High Commissioner said she is “extremely concerned about their physical treatment, violations of their right to due process, and the possibility that a significant number of them may be charged with offences that carry the death penalty, in addition to the conditions under which they are held.”

During the five days of demonstrations, which according to official Government sources involved between 120,000 and 200,000 protestors, the UN Human Rights Office has information suggesting that at least 208 people were killed, including 13 women and 12 children. There are also reports, which the UN Human Rights Office has so far been unable to verify, suggesting more than twice that number killed.

As more information gradually filters out of #Iran in the wake of the recent protests, @mbachelet is alarmed by the lack of transparency about casualties & the treatment of thousands of detainees + continuing arrests reported across the country 👉 https://t.co/r55UzwCDmU pic.twitter.com/NnG6tW4hf3

Iranian regime judiciary chief Ebrahim Raisi, in a recent visit to Isfahan, central Iran, shed light on the mullahs’ future plans to further restrict the Iranian people’s access to the internet as a prelude for more deadly crackdown measures. During Raisi’s stay in Isfahan, members of the Iranian opposition People's Mojahedin Organization of Iran (PMOI/MEK) Resistance Units network were busy spreading the message of this resistance movement. Banners of Iranian Resistance leader Massoud Rajavi were put up by resistance units members insisting the November uprising will continue until freedom is established across Iran.

Reporting by PMOI/MEK Iran, November 2019—Due to the near-total internet shutdown imposed by the Iranian regime, videos and images from the nationwide uprisings that erupted across Iran after a government-imposed fuel price hike are just starting to trickle out of the country. These videos were obtained from Behbehan, one of the focal points of the protests.

Remarks by U.S. President Donald Trump in Luncheon with the Permanent Representatives of the U.N. Security Council - December 5, 2019:

The Council must take action to confront these and other dangers facing the world. That also includes the behavior of the Iranian regime, which has killed hundreds and hundreds of people in a very short period of time. They’re killing protestors.  They turned down their Internet system. People aren’t hearing what’s going on.
I would like to see the media get involved in that and go in and see what’s happening, because it’s not a good situation. It’s a horrible situation. It’s something that is going to be a big scandal throughout the world very soon. They’re killing a lot of people. And they’re arresting thousands of their own citizens in a brutal crackdown in recent weeks because they’re protesting. And I think the media should get involved in that.
America will always stand with the Iranian people in their righteous struggle for freedom. They’re not being treated properly. All of that money is being wasted on weapons and on other things, and they’re not treating their people properly. And there are people in — all over the country, they’re rioting and they’re protesting, and they’re very unhappy. 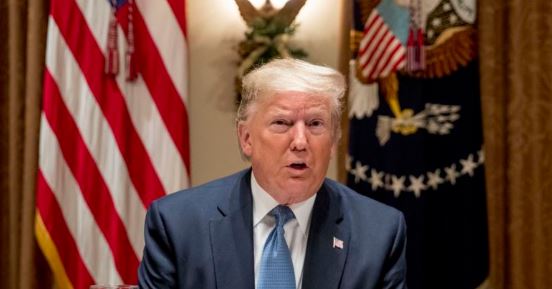 Struan Stevenson Coordinator of the Campaign for Iran Change: EU Media Have Failed to Properly Cover the Iran Protests

More read: Day 21 of the Iran Protests for Regime Change