Bi-partisan Support in U.S. Congress for Iran Uprising and Resistance 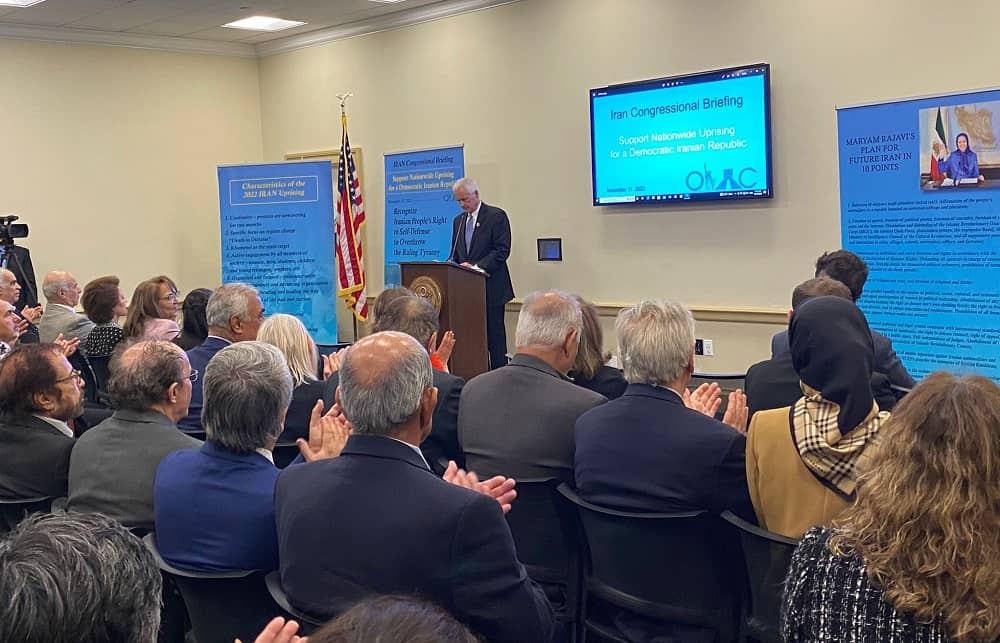 On Thursday, November 17, 2022, the Organization of Iranian American Communities (OIAC) held a bi-partisan congressional briefing in solidarity with the nationwide uprising in Iran. Distinguished American lawmakers from both parties joined this conference and vowed to continue supporting the Iranian people’s right to a free and democratic country. They also called for holding the Iranian regime accountable for its crimes against humanity, such as killing innocent protesters and the 1988 massacre of over 30,000 political prisoners.  While supporting a democratic Iran, they rejected any form of dictatorship in Iran.

Mrs. Maryam Rajavi, the president-elect of the National Council of Resistance of Iran (NCRI), also sent a video message to this event, presenting a short insight into the regime’s four decades of crimes and also the current situation in Iran. She urged the world community, particularly the United States, to stand with the people of Iran and their Resistance and to recognize their will to topple the ruling theocracy.

“A big revolution is in the making in Iran. First, it rejects all forms of dictatorship. Every day the protesters reject both the Shah’s dictatorship and the mullahs’ tyranny in their slogans. Secondly, this uprising has been distinguished by the leading role of women. Their active presence has challenged the regime’s misogyny, which is one of its most vital pillars,” Mrs. Rajavi said.

“During the apartheid regime in South Africa, the US Congress passed the Comprehensive Anti-Apartheid Act of 1986. Today, the Congress is also expected to take side with the fighting men and women in Iran with a similar bold initiative,” she added.

The Iranian regime considers the #MEK as its main existential threat. The defining benchmark for relations with foreign countries particularly in Europe and the US is their position on the MEK.pic.twitter.com/bxweHzPEnc

“I stand with the brave women of Iran and men risking their lives…I also stand with the people in this room and Mrs. Maryam Rajavi, who have risked their lives for a free, democratic, and equal Iran for decades,” Congressman Brad Sherman (D-CA) said.

"I stand with the brave women of Iran and men risking their lives…I also stand with the people in this room and @Maryam_Rajavi who have risked their lives for a free, democratic, and equal Iran for decades." — @BradSherman #IranRevolution #Mahsa_Amini pic.twitter.com/qSy3iLYBRc

“We’re not talking about, once again, [trading one] form of autocracy for another. We’re talking about freedom. This is the revolution,” Rep. Randy Weber (R-TX) stated. “Let’s make sure that what happened with the Green Movement in 2009 is not going to happen here. Let’s keep drawing attention to it and keep making sure that people know. Let’s get the world on our side, and let’s get the thugs out of it,” he added.

Rep. Sheila Jackson-Lee (@JacksonLeeTX18) proudly recalls the progress made over the years in defense of Camp Ashraf and human rights in Iran and calls for a new pathway in an invitation to @Maryam_Rajavi #Iran #IranRevoIution pic.twitter.com/kUe82XcHQM

“I believe that the people of Iran are engaged in a just and righteous cause, and we are proud to stand with them. The Ayatollahs know their days are numbered,” Congressman Tom McClintock (R-CA) said in his remarks on Thursday’s event.

Congressman Joe Wilson (R-SC), who has been supporting the Iranian Resistance for a long time, once reiterated his support of the Iranian people and underlined that “it’s so important that the people of Iran finally be free and be able to exercise their rights.”

I spoke to the @OrgIAC and members of the Iranian-American Community of SC. I stand with the people of Iran fighting against the brutal oppression of the murderous kleptocratic regime. U.S. Policy on Iran must support basic human rights and dignity. #IranianRevolution pic.twitter.com/ANuLL80ONH

Congressman Steve Cohen (D-TN) was also among the speakers at Thursday’s event. He said: “You can’t watch the news and see the protests led by the women in Iran and the brutality against them and the killings and the beatings, and not have sympathy and have concern almost come to tears. Freedom is so important, and the young women and others in Iran are showing.”

“Iranians have been struggling under violence and repression of the Ayatollahs’ clerical regime for over 40 years now. It’s a struggle that has drawn renewed worldwide attention in the light of nationwide protests sparked by the murder of a young woman, Masha Amini, at the hands of the regime’s morality police,” Congresswoman Abigail Spanberger (D-VA) told the attendees of the Thursday’s conference.

Referring to the regime’s brutal conduct during recent protests, Congresswoman Spanberger said: “Yet instead of leaving the streets, the escalating violence and murder have only added to their outrage, and it has become a rallying cry for Iranians demanding their rights. And so, I want to express my steadfast support and commend the bravery, courage, the resolve of these young women and men as they demand their basic freedoms and stand up to the regime in the face of appalling intimidation, violence, and detentions.”

Referring to the bi-partisan support of Iran’s nationwide uprising in the U.S. Congress, Representative Scott Peters (D-CA) said: “The Iranians have a right to defend themselves and we’re with you. Members of Congress from across the country from across the political spectrum believe in this struggle with you. We’re here to speak up for you. We can’t win this battle for the people of Iran. It’s a revolution of freedom, much like ours was many hundreds of years ago. So, we wish you the best.”

While saluting brave Iranian men and women rising for freedom, Congressman Lance Gooden (R-TX) said: “We support the movement that has begun, and I hope it continues. It seems as if this movement is very special and unlike any others. And we support the good people and the freedom fighters and pro-democracy people of Iran. Please continue your fight, and I look forward to joining you one day in a free and democratic Iran.”