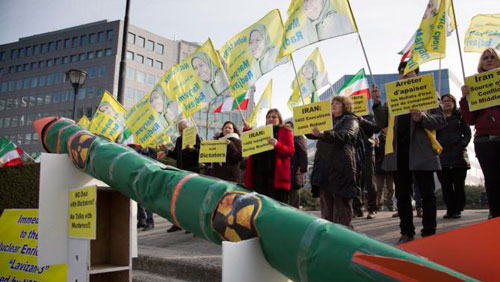 They protested the record high number of executions in Iran and the increase in human rights violations under Hassan Rouhani and warn against the dire consequences of any concessions to Tehran in nuclear talks.

While reminding of the Mullahs’ decade-long deception and cover-up tactics to obtain a nuclear bomb, the Iranian community call for firmness as well as snap inspections and unrestricted UN access to all suspected nuclear sites and the implementation of the nuclear NPT accord.

They also insisted that any expansion of a relationship with Iran must be conditioned upon a clear progress in human rights and that human lives cannot be sacrificed for a nuclear deal.

One of the protesters said: “The mullahs who are hated by the Iranian people view acquiring a nuclear bomb as the only means for the survival of their dictatorial rule.”

“The mullahs want to keep their nuclear program intact and have the sanctions removed. This would be a big strategic mistake. Making nuclear concession to the mullahs will have horrific consequences for the people of Iran, the region and the whole world.”

On the situation of human rights in Iran the protesters held signs condemning the high rate of executions in Iran under Hassan Rouhani.
The protest by Iranians in Belgium coincided with the UN’s special investigator on Iran saying in Geneva that the human rights situation and the repression of Iranian women and activists has worsened since Hassan Rouhani became president in 2013.

Dr. Ahmed Shaheed said “in my view the overall situation has worsened, as indicated by the surge in executions”.

“There is a lot of concern amongst the Iranian society that the nuclear file may be casting a shadow over the human rights discussion,” Shaheed told a news briefing.

The same concern was raised by protesters that carried signs reading “Iran: 1400 executions during Rouhani”, and “stop appeasing mullahs in Iran”.