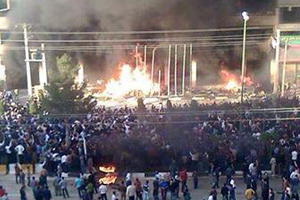 The people of Sardasht also demonstrated in solidarity with the people of Mahabad, chanting “We are all Farinaz” and “Mahabad is not alone”, “Silence today, tomorrow worse”. The suppressive forces tried to disperse the crowd by throwing tear gas and beating with batons and direct firing.

This attack led to the clash of people with mercenaries. One of the demonstrators was shot and wounded, 20 of them were arrested. The people also attacked suppressive forces with stones. Clashes are also being reported in the cities of Marivan and Khoy.

These protests take place while following the rise of the courageous people of Mahabad on May 7, the clerical regime dispatched lots of forces from other cities to Mahabad to contain the protests and arrested hundreds of people. At the same time the religious fascism ruling Iran has put the suppressive forces in different cities of the region, including Sanandaj, Marivan, Oshnavieh, Saghez, … on alert.
In spite of this widespread repression, fearful of popular uprisings, Khamenei said in a speech on Saturday May 9: “The country today, fortunately, is not engaged in a military war, but is engaged in a political war, an economic war, a security war, and above all a cultural war. That means a war exists, if one does not know it, he will remain asleep. It suffices not to know the enemy is about to attack, where is the attack coming from and how is it, you must be sure you will fail. You should know what the enemy does. Today this is the country’s scene is.”

Previous articleIRAN: Prisoners chant “Down with dictator” during protest against repressive measures
Next articleSuspects in smuggling explosives to Saudi Arabia had Iranian connections