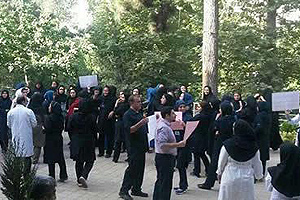 NCRI – Iranian nurses have staged anti-regime protests in front of hospitals in the capital and various cities over their inadequate wages.

In the capital Tehran, hundreds of nurses and medical professionals from Taleqani, Khomeini, Luqman Hakim and Payambaran hospitals took part in protests demanding that nurses receive wages based on the amount of work they carry out.

The nurses demanded that a larger portion of the hospital funds be set aside for paying their wages.

The nurses had previously been told by officials that protests would be met with expulsions, and that the authorities could employ other workers to fill the place of expelled nurses.

Another large protest by Iranian nurses was held in February outside the regime’s Parliament.

For more than a year, nurses have organized several similar protests in Tehran and other cities in Iran.

Due to difficult working conditions, many nurses who previously were working in the provinces have been forced to leave their hometowns and migrate to Tehran and other major cities in search of work. In Iran, public hospitals are currently facing a serious problem of nursing shortage.

According to international standards, there should be a minimum of two nurses per hospital bed each day, while in Iran the number is half this, according to some officials.

The shortage of nurses has forced nurses to work many overtime hours.

It is estimated that some 40 nurses leave Iran every day to find work in other countries, making the situation in the hospitals critical.

Australia, the USA and the UK are among other major destinations for Iranian nurses.

Previous article
Rep. Fleischmann: Any deal must cut off Iran’s path to a nuclear weapon
Next article
IRAN: 3 dead in explosion at Isfahan Steel Company