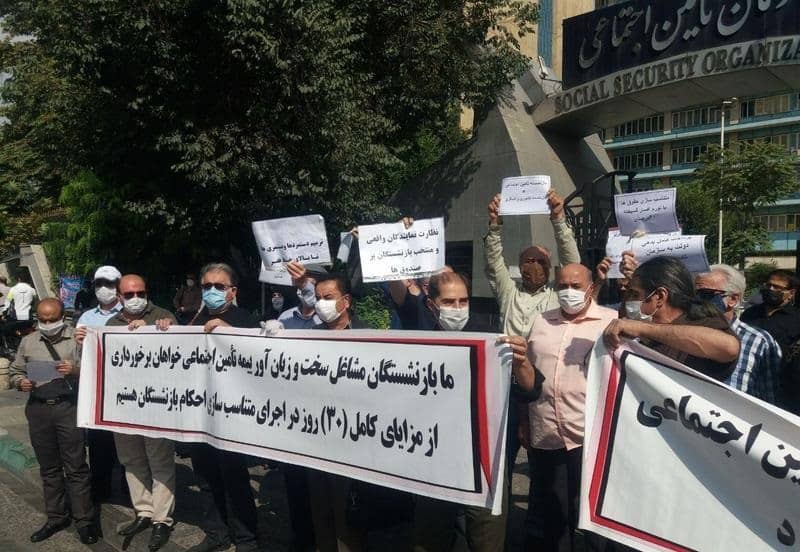 On Sunday, retirees and pensioners of Iran’s Social Security Organization held their 12th nationwide rallies in the last four months, once again underlining that “only on the streets, we will get our rights.” This slogan alone shows they consider the regime behind all their problems.

They underlined is the regime’s institutionalized corruption that has affected the financial situation of Iranians by chanting: “our hands are empty, but you are in a good situation,” and “plunderers shame on you, leave our country.” Iranian pensioners emphasized their resolution to continue their protests for obtaining their rights and not succumbing to the regime’s threats by chanting, “Retirees die, but will not be humiliated.”

Retirees held their protest on Sunday, despite the regime’s threats. The regime’s security forces had threatened or gave hollow promises to retirees to not hold their protests under the pretext of protests coinciding with the regime’s army day. But the regime failed in preventing retirees and pensioners from holding their rallies across Iran.

The regime is unable to oppress these protests as it had done before. Due to the society’s explosiveness, the clerical regime’s oppression would have an opposite result and only intensifies protests.

On Sunday, the state-run Jahan-e Sanat daily on Sunday admitted that “people are like the fire under ashes,” and the regime’s corruption “has increased people’s anger,” therefore further oppression “will condense [people’s hatred toward the regime], and unpleasant reactions happen.” Also, the state-run Sharq daily on Saturday underlined that people’s reaction would get the regime to “an unknown location.”

On the other hand, if the regime allows these protests to be held, they would again spread and intensify, and different walks of life would pour on the streets to claim their rights. Because “People’s tolerance has a limit,” according to the state-run Arman on Sunday; and “there is a possibility of all forms of protests in the country,” as the state-run Jahan-e Sanat underlined on Sunday.

Mostaghel daily on Sunday admitted that society’s current explosive state “has reached a certain point of difficulties that speaking of it agitates the officials.”

The regime is in a deadlock and faces a society that is on the verge of a revolution. It is only a matter of time when a nationwide uprising erupts. As the state-run Mostaghel daily on Sunday admitted, “the system’s ship is stuck in the mud, and its captain [the supreme leader Ali Khamenei] doesn’t believe that its passenger [regime officials and affiliates] are drowning; one by one.” Mostaghel acknowledged that people’s storm of anger would “throw everyone, even the captain into the turbulent sea.”