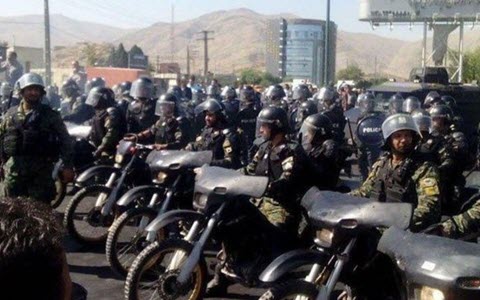 NCRI – The Iran regime has arrested some police officers as the protesting workers of Azarab Industry (A.I.C) of Arak (Center of Iran) reported. The police officers did not follow the order to beat the workers as they said, “We will not beat our countrymen with baton.”

It is noteworthy that the Disciplinary Police has fired tear gas and air strikes and beat the protesting workers in Arak on Tuesday, September 19. Many workers were injured detained, and have been transferred to the hospital, according to the Free Workers’ Union of Iran.

The commander of the Disciplinary Forces in Markazi Province, Kiyoumars Azizi on his speech on Thursday, September 21 supported the regime’s attacks on workers claiming that the police have to resort to legal authority in order to ensure the public security.

It is noteworthy that On Wednesday, September 20, 1800 workers of the Azarab factory in Arak gathered in the factory for the fourth day of their protests, for lack of payment of their salaries and benefits for six months. According to the workers, the company has no problem in terms of work and liquidity, and thief government directors who themselves have astronomical salaries and revenues refuse to give workers their rights. They are demanding payment of wage arrears, insurance and bank insurance payments, and resuming operations. The repressive forces attempted to disperse workers by firing tear gas and air shooting and beating the workers with clubs.

The Iranian Resistance hails the brave workers of the Azarab and Hepko factories in the city of Arak – central Iran, who have been protesting bravely for their rights in recent days, and calls on the general public and the youth to help them in solidarity. The Iranian Resistance also calls on the international organizations defending the rights of workers to support the striking and protesting workers in Iran and to take effective action to release the detained workers and to address their demands.