Iran State Media Acknowledge the Society Is A Powder Keg 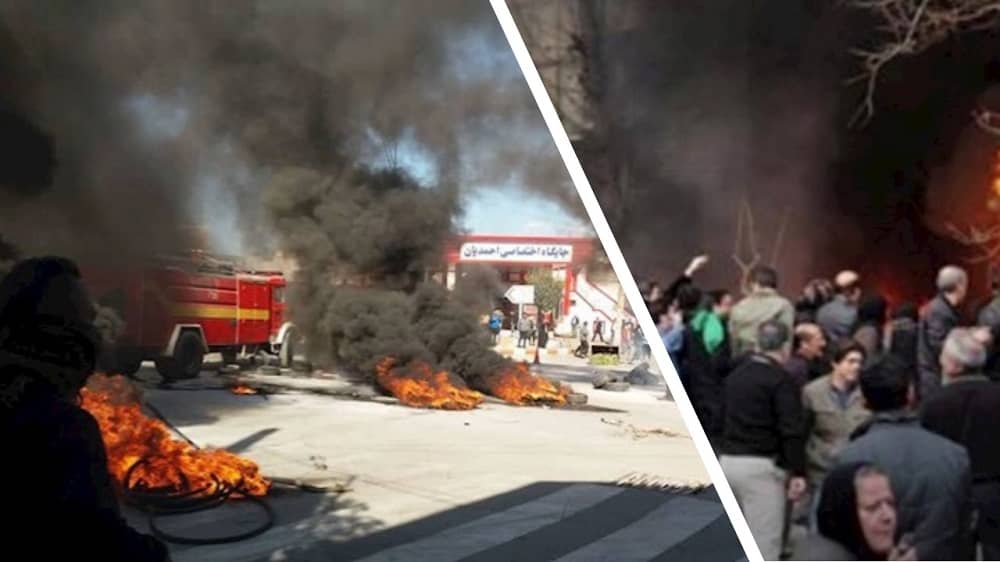 As the people of Iran continue grappling with more crises, one might argue that the mullahs’ regime is very stable. But according to the regime’s state-run media, the regime is on the brink of collapse, fearing people’s hatred result in another uprising.

“Our people are very much angry. These days, the volume of bad news is so high that it puts everyone’s tolerance threshold at risk,” wrote the state-run Aftab-e Yazd on July 7, in an article titled “The influenza of anger. Officials, this warning is serious. People and society are not feeling good.”

“Uncertainty, economic pressures, discrimination, inequality, officials’ Ignoring the demands of society and ignoring its growing expectations are the causes of anger. Our society is angry, and this is a great warning to the officials who cause a great deal of this social anger,” Aftab-e Yazd added.

“High anger in society has many destructive effects. An angry society becomes a destructive society if these negative energies are accumulated because there is a possibility of its eruption. There is nothing but destruction in an angry society, and the authorities should be afraid that this anger will spread. When people cannot access their rights, It is normal for anger to occur,” Aftab-e Yazd warned regime officials.

“The lack of basic living facilities, in the capital or remote areas of Iran, has made things so difficult for people that now everyone is angry. They are angry at the inefficiency and mismanagement that has left Iran, one of the richest countries in the world, unable to provide a living for its citizens,” the state-run Hamdeli wrote on July 7, 2021.

Iranians are grappling with water shortages, extensive blackouts, Covid-19 outbreak, and poverty. The regime is behind creating all these crises. Thus, people’s hatred toward the regime increases daily. As a result, there are daily protests in Iran by people from all walks of life.

Hamdeli daily acknowledged the ongoing protests in Iran and the regime’s desperate attempts to downplay the crises.

“In last days, there have been protests in public to the current situation in the country. Some officials have tried to explain the situation. For example, they claimed one of the reasons for drought and water shortages and blackouts is lack of sufficient investment. In line with this notion, they are trying to say that the price of water, electricity, and gas in Iran is low and that the money that people pay cannot lead to infrastructure development. The same thing happened in the case of the fuel price hike,” Hamdeli wrote.

“Proponents of this theory do not say that Iran has enormous wealth that belongs to the entire nation, and since all this wealth has been declared national for many years, it must be spent in the national interest. Oil is one of Iran’s main sources of income. In the last four decades, they have not used oil revenues to develop and strengthen important infrastructure? Oil sales have not always been sanctioned. Why when all the countries of the world have been able to generate electricity in new ways, Iran is still stuck in the maze of generating electricity in old ways,” Hamdeli’s article adds.

Hamdeli then acknowledged that “it has been proven that top officials, at least the cabinet members, were aware of the situation in summer.”

While there are many speculations about the cause of Iran’s extensive power outages, information from Iran indicates that rampant mining of cryptocurrencies by the Revolutionary Guards (IRGC) to circumvent sanctions plays an important role in the current crisis.

“Since the middle of last year, when the extraction of cryptocurrencies by government agencies intensified, various official reports have shown that there is a shortage of electricity in the country. However, extraction continued, and even larger mining farms were created,” Hamdeli wrote in this regard.

According to Hamdeli, to build cryptocurrency farms, “Power plants needed more fuel. As a result, they used more water resources and burned more fuel oil to generate electricity, causing pollution in different country cities. Consumption of water resources in winter warned that the situation is difficult for Iran this summer. But officials were not thinking about electricity and water. Due to the oil embargo and low foreign exchange earnings, the authorities prioritized the country’s foreign exchange supply. So, they continued to use the country’s resources to extract cryptocurrencies.”

Other state-run media also reflected the regime’s fear of the consequences of the current crises.

The situation in Iran has reached a point that Mohammad Bagher Qalibaf, the regime’s Parliament Speaker, recently acknowledged people had lost their “trust” in the system.

“Iranian citizens these days are outraged by the shortcomings and inefficiencies in every way. Ghalibaf was right to say the people lost their trust. Iranians are not only angry these days, but their national pride also seems to have been severely damaged. Iranians are also outraged by the suffering and pain of accelerating prices. They are frustrated due to the water and electricity shortages,” the state-run Jahan-e Sanat wrote in this regard on July 6.

In other words, the regime is facing a restive society, and sooner or later, there would be another major uprising.