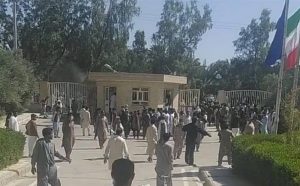 Protests erupted in the city of Saravan, southeast Iran, when the Revolutionary Guards (IRGC) opened fire on a group of deprived Baluchi fuel porters, killing and wounding dozens. People in different parts of Sistan and Baluchistan staged protests and strikes, in some cities attacking IRGC bases. These protests indicate the Iranian society’s restiveness.

The Iranian regime has been killing deprived fuel porters in Sistan and Baluchistan, under the pretext of fighting smuggling. Yet, the IRGC controls Iran’s smuggling network.

In Saravan, locals staged protests and local business owners went on strike on Tuesday. Despite the heavy presence of IRGC forces, people stormed the governorate. IRGC forces opened fire on the crowd, killing dozens of them, yet locals continued their protests. In return, the defiant youth set a few police vehicles on fire and blocked roads by burning tires.

Simultaneous with the protests in Saravan, locals of the Keshtegan village, at the zero point of the border, known as the “Bam Posht” section clashed with the regime’s forces in front of the IRGC base.

The IRGC forces call deprived people ‘smugglers’ and kill them. All the while, Ehsan Houshman, one of the regime’s so-called experts, on January 5 said: “Mafia gangs are formed in smuggling. Sometimes 100 trucks cross the border with an official government document. These Mafia gangs smuggle as much as 10 to 15 million liters of diesel a day.”

Houshman admitted that this regime-affiliated mafia earns such a huge profit that “even if 50% of this smuggling is stopped, that is an addition of $6 billion annually for the country’s economy.”

IRGC forces open fire on deprived fuel porters, while according to the regime’s MP Moinuddin Saeedi, the regime’s authorities stay “silent in the face of the fuel mafia which operates with governmental rents.”

Protests in Saravan indicate society’s restiveness and the mullahs’ failure to control it despite killing 1500 protesters during the November 2019 uprising or choosing a criminal coronavirus policy to slowly kill people through inaction and cover-up of the deadly virus.

The protests in Saravan are in line with daily protests by all walks of life and the two major Iran protests in 2018 and 2019 which rattled the regime’s foundation. In other words, it is safe to say that social problems in Iran, such as poverty, inflation, coronavirus outbreak, and the regime’s mismanagement plus its 40 years of oppression, have turned Iranian society into a powder keg. Unprecedented escalation of poverty and misery of oppressed people has led to an unprecedented escalation of conflict between the people and the regime.

Iran’s state-run media have been warning officials of the society’s explosive state. On Tuesday, Mostaghel daily warned the regime’s officials of uprisings that “according to many security officials, will happen once again, and will not be comparable with the ones in January 2018 and November 2019.”

Protests in Iran also indicate that the mullahs’ regime is neither able nor willing to resolve Iran’s economic crisis. The regime has enough funds to help people, but, according to Reuters, it instead spends “$600 million” to reconstruct holy shrines of the Shi’ite Imams in Iraq, to increase its ominous influence in the region.

The regime’s economic mismanagement has forced many people to live in poverty, and many Iranians in different provinces, such as Sistan and Baluchistan, become porters to make their ends meet. Yet, the IRGC kills them.