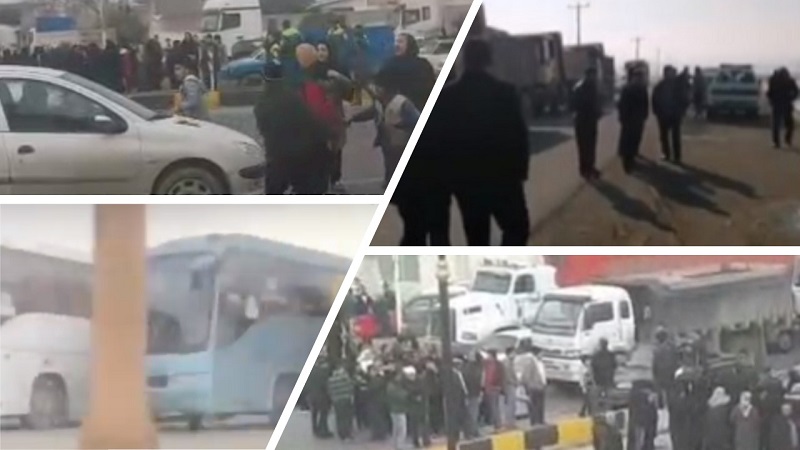 Reports from Iran indicate that residents of the Afsaran district of Gorgan, in northern Iran, held a protest rally on Thursday, January 30, against the incompetence and indifference of the Iranian regime’s municipality officials.

People gathered on the streets and created roadblocks with tires, demanding the regime’s officials to finally live up to their promises of launching an initiative known as the “Gorgan Gulf” plan.

New protest reports from various cities of #Iran, including Gorgan in the north and Ahvaz in the southwest.#IranProtestshttps://t.co/1TrdE5OyEy

For years, the authorities have been claiming to seek measures to revive the local bay area in Gorgan, without taking any practical action. Locals accuse the regime of incessant lies in this regard.

The Gorgan bay depth has decreased to three meters, and in some areas, it is as low as 1.5 meters, due to lack of necessary measures by the municipality to keep the area up and running. Experts predict a major environmental disaster if the water channels of the bay in Gorgan are cut off from the Caspian Sea.

Years have passed and numerous sessions have been held in this regard, yet the authorities in this province have not taken any measures. Instead they have plundered the budget allocated for such measures to fund their own interests. According to experts, if the Gorgan Bay area is destroyed, all cities, towns, and villages in this vicinity would be devastated.

In another development, in the southwestern Iranian city of Ahvaz, municipality workers have been on strike since last Saturday. According to Mohammad Reza Izadi, a member of the regime’s city council, this protest has continued until now.

On Thursday, the workers rallied outside Ahvaz’s municipality building, demanding their paychecks that have been deliberately delayed for the past six months.

This strike has resulted in many areas of Ahvaz not being cleaned in the past five days, creating intolerable conditions for the locals. Yet, the authorities have shown no sign of taking any care in this regard or seeking any measures to resolve this crisis.

On January 25, drivers who transport employees to Khomeini Port (Bandar Shahpour), southwest Iran, went on strike in protest to low pay, high prices, and the regime’s hollow promises. The drivers take around 5,500 workers to work every day.

Unpaid wages have become a common reason for protests in Iran in the past years. Workers, teachers, and government employees from across Iran have been constantly demonstrating unpaid and months-delayed salaries. The regime, however, has either responded by attacking and arresting protesters or making hollow promises.

In addition, they have been numerous protests by people who have been plundered by the institutions affiliated to the Revolutionary Guards (IRGC). The money invested by people has been plundered by these institutions and used in the regime’s warmongering campaigns. For instance, on January 17, further protests against the IRGC took place in Tehran, where a group of people who invested in the IRGC’s Caspian Credit Firm held a rally outside the company’s administrative office to protest the plundering of their money.