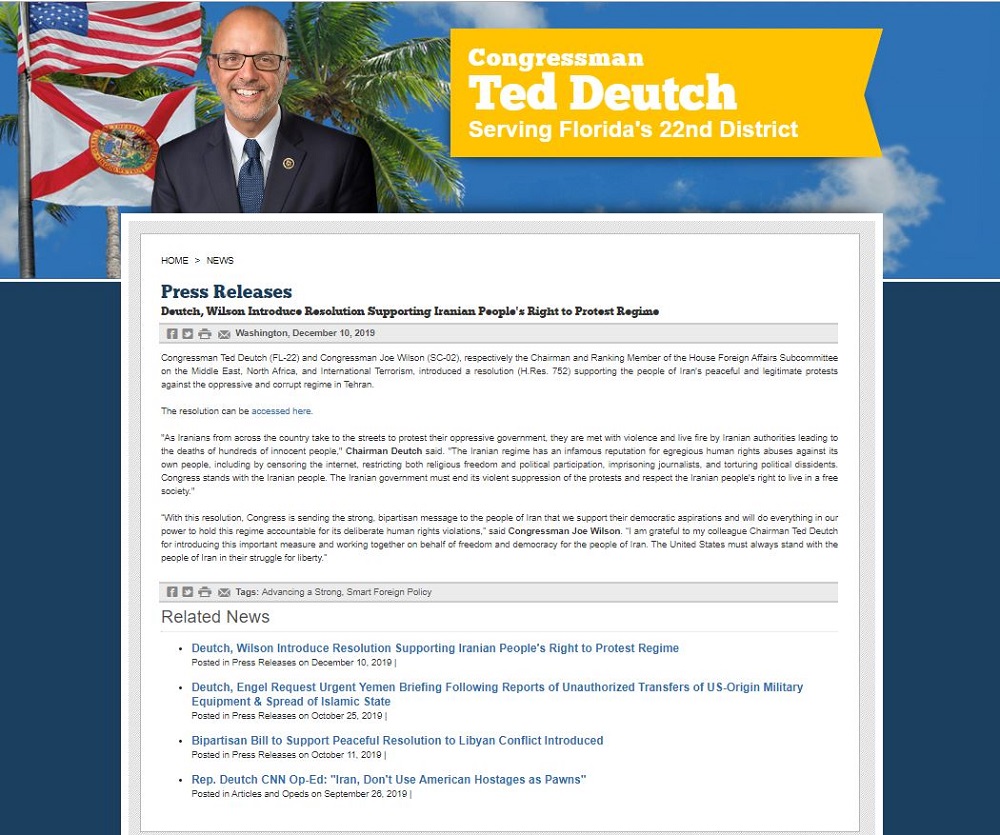 Congressman Ted Deutch, Chairman of the House Foreign Affairs Subcommittee on the Middle East, North Africa, and International Terrorism announced in a statement that the United States Congress stands with the Iranian people in the wake of the

“As Iranians from across the country take to the streets to protest their oppressive government, they are met with violence and live fire by Iranian authorities leading to the deaths of hundreds of innocent people,” Chairman Deutch said.

“The Iranian regime has an infamous reputation for egregious human rights abuses against its own people, including by censoring the internet, restricting both religious freedom and political participation, imprisoning journalists, and torturing political dissidents. Congress stands with the Iranian people. The Iranian government must end its violent suppression of the protests and respect the Iranian people’s right to live in a free society,” he added.

“With this resolution, Congress is sending the strong, bipartisan message to the people of Iran that we support their democratic aspirations and will do everything in our power to hold this regime accountable for its deliberate human rights violations,” said Congressman Joe Wilson.

“I am grateful to my colleague Chairman Ted Deutch for introducing this important measure and working together on behalf of freedom and democracy for the people of Iran. The United States must always stand with the people of Iran in their struggle for liberty.”

The main opposition group People’s Mojahedin Organization of Iran (PMOI), also known as the Mujahedin-e-Khalq (MEK), has announced the names of 432 of more than 1000 protesters killed by Iran’s regime in the Iran protests.

Previous articleWhat Are the Iran Protests of 2019?
Next articleMEK’s Position on Ali Shamkhani’s Admission of The Massacre of Iran Protesters