Teachers’ Day in Iran: Jailed Teacher on Hunger Strike; Another Punished for Singing in Classroom 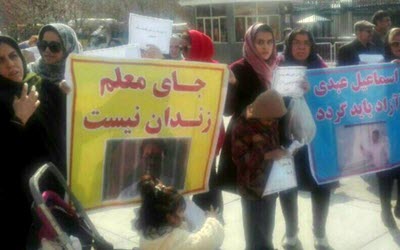 NCRI – On the so-called Teachers’ day in Iran, former director-general of Teachers’ Trade Association ‘Esmaeil Abdi’ is on hunger strike in prison, and another teacher from Gilan has been sent into exile for his singing in art class.

May 2 in Iranian calendar is the Teachers’ Day and the beginning of a weeklong tribute to teachers. On the eve of the day, however, Esmaeil Abdi, former director-general of Teachers’ Trade Association, who is currently serving his six-year prison term, has said in a letter he has gone on a hunger strike.

“There’s been too much speaking of lawfulness, democracy, human rights, and civil rights by the officials in post nuclear deal era“ says Mr. Abdi in his letter, while pointing to repeated violation of the rights of teacher activists, their detention, and minutes-long trials.

The teachers union activist has also pointed out that “he’ll go on a hunger strike starting from 30 April to protest against non-independence of the judiciary in its issuing security verdicts for teachers and labor union activists”, calling for his case to be regarded as a normal rather than a security one.

Meanwhile, the ‘Teachers and Workers Rights’ website has announced that Aziz Ghasemzadeh, Gilan Teachers Trade Association Spokesman and an art teacher in Bandar Anzali, has been sentenced to one-year of exile.

According to the report, Gilan Education Department has transferred the music teacher, who is also a teacher’s union activist, to Rudbar for his singing in class.

Following a March-9-2016 call on social networks, a number of teachers in different Iranian cities took to the streets with placards in hand, calling for their job related demands to be dealt with.

The rallies were held in front of the regime’s parliament in Tehran and the Education Departments in other cities, with the reform of teachers’ payment and healthcare system being one of the issues demanded by protesting teachers.

There were also placards which called for overturning the conviction of teachers’ union activists.

Previous articleIranian Regime Official: People’s Mojahedin Are Trying to Make an Impact on The “People’s” Election
Next articleAmnesty International Stands in Solidarity With Trade Unionists in Iran