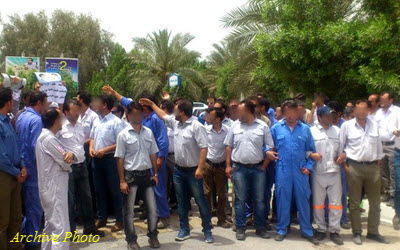 NCRI – A group of South Pars Oil Company and Tehran Refinery workers and engineers commemorate the International Workers’ Day by issuing a statement.

“It’s been years that government organizations pretend to commemorate the International Workers’ Day”, reads the statement, “But is there anyone who is not aware of the fact that these rulers don’t care a single bit about workers?”

The toiling workers then say “in cold and heat, we’ve laboriously moved the country’s wheels of economy with our efforts and productions.

Meanwhile, we end up empty handed, being ashamed before our families of an empty table and not being able to provide them with their most basic needs. And all that while we’re extracting and exporting oil, gas, and our other national resources. So, where does all this wealth go? Why we workers should struggle with such disastrous living conditions with no future awaiting us and our children, while more and more children of officials are living it up abroad from our labor?”

At the end of the statement, the workers emphasize on their least demands, saying “we remind that we can’t tolerate this situation any longer. We’re not going to remain silent any more, and let our children have the same fate as ours: a cursed generation whose children will remember them as coward, submissive fathers.”

Previous articleIran: The Lack of ‘Disaster Management’ and Its Catastrophic Results
Next articleA Look at Workers’ Protests in Iran in Last Year