Thousands Say ‘No to Rouhani,’ Support Regime Change in Iran – Report From Rally by MEK Supporters at UN in New York 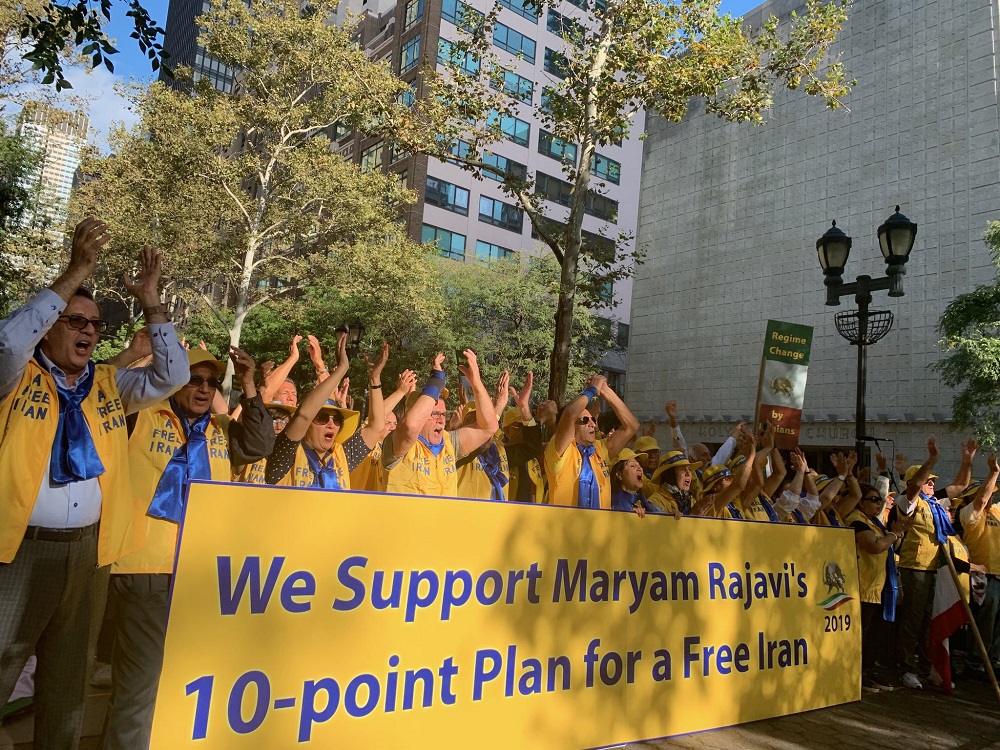 Written by Mansoureh Galestan on 24 September 2019.

Supporters of the main Iranian opposition group People’s Mojahedin Organization of Iran (PMOI, Mujahedin-e Khalq or MEK) called on the UN and its Member States to recognize the right of the Iranian people’s democratic Resistance movement to overthrow the theocratic dictatorship and attain freedom.

The protesters chanted “Down with Rouhani” and “Down with Khamenei,” referring to the regime’s President Hassan Rouhani and Supreme Leader Ali Khamenei.

Iranian opposition leader Maryam Rajavi said in a message to the rally: "Your gathering in New York is a resounding 'No!' to the policy of appeasement, to the policy of buying chances for a moribund regime, and to the policy of inaction toward a regime that preserves its power through warmongering, terrorism, and suppression."

"Your gathering says 'No' to the continuation of the rule of a bunch of occupiers and criminals in Iran. And, it says 'Yes' to the overthrow of this regime by the people of Iran and the Iranian Resistance," added Maryam Rajavi, President-elect of the National Council of Resistance of Iran (NCRI).

The most crucial solution to discard the religious fascism is to overthrow it. Overthrow at the hands of the people of Iran and their organized resistance. #IranRegimeChange #FreeIran #NoImpunity4Mullahs #UNGA https://t.co/QW280bVSip pic.twitter.com/liSw77PeKP

Mrs. Rajavi further stated: "Following the clerical regime’s recent attack from inside Iran against Saudi oil facilities, the real question facing the world is no longer who conducted the attack, but they need to advance a policy of decisiveness and firmness against this regime."

The policy of appeasement toward Iran's regime has fostered catastrophes, and there is only one way to undo the damage and that is to stand on the side of the people of Iran who have risen up to uproot the central banker of terrorism, she said.

"The regime in Iran is neither capable of reform nor can it change its behavior; it will never abandon weapons of mass destruction, human rights abuses, and promotion of fundamentalism and terrorism; it gets emboldened by appeasement and it only understands firmness and strength," Mrs. Rajavi added.

"The mullahs’ regime is weak and at an impasse. Its adventurism and evil acts in the region are expanded only because no other party has stood up to it. At the same time, the people of Iran are the regime’s primary victims."