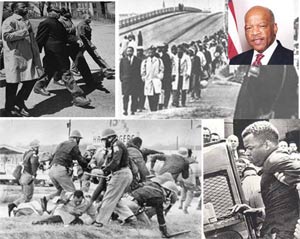 NCRI – In a Capitol Hill briefing, Congressman John Lewis, described by the House Speaker Nancy Pelosi as “the conscience of the U.S. Congress,” spoke to a number of his colleagues, Iranian-Americans and supporters of Camp Ashraf in solidarity with the Iranian Resistance. 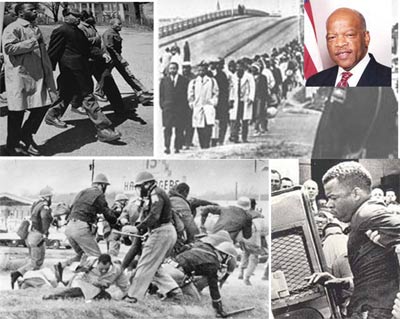 NCRI – In a Capitol Hill briefing, Congressman John Lewis, described by the House Speaker Nancy Pelosi as “the conscience of the U.S. Congress,” spoke to a number of his colleagues, Iranian-Americans and supporters of Camp Ashraf in solidarity with the Iranian Resistance.

A former colleague of Dr. Martin Luther King Jr., Lewis has been and continues to be one of the most prominent leaders of the civil rights movement in the United States. During the past quarter century, he has been enthusiastically elected by the people of Georgia as one of their representatives in US Congress.

Lewis was also among a majority in the US House of Representatives who co-sponsored House Resolution 704, which called “upon the President to take all necessary and appropriate steps to support the commitments of the United States under international law and treaty obligations to ensure the physical security and protection of Camp Ashraf residents against inhumane treatment and involuntary deportation by Iraqi security forces.”

Below is an excerpt of his speech on Capitol Hill.:

Thank you very much

Let me just take a moment to say welcome to Capital Hill and this briefing. I want you to know that when I first came to Washington many years ago to go on to something called the Freedom Rides; I got arrested, beaten, and jailed. Then I came back here again in 1963 with Dr. Martin Luther King Jr. and others and spoke on the steps of the Lincoln Memorial. There were ten of us as speakers. Dr. King was the 10th speaker and I was the sixth. Out of the 10 people that spoke that day I am the only one still around.

I come here to say to you, never ever to give up, never ever to give in, and never ever to lose faith. I got arrested 40 times, went to jail, beaten, left bloody and unconscious on the Freedom Rides. I had a concussion of the brain during the march from Selma to Montgomery on March 7, 1965. But we didn’t give up.

And people who support the people in Iran and those of you who live and reside here in America and around the world must never ever give up. Continue to press forward for your brothers, sisters, uncles and aunts, for your mothers and fathers and grand parents and great grand parents. As long as the people of Iran are denied their basic rights as human beings people all over the world are denied their rights.

When I saw the recent uprising in Iran, it reminded me of some of the non-violent struggle that we had in America for the right to vote and for the right to participate in the democratic process.

So, hang in there.

I supported sanctions [against the Iranian regime] and I will continue to do what I can to help bring the attention of the world, and especially the citizens of America, to the issues that are confronting the people of Iran. You will have supporters and you will have people that will stand up and fight the good fight with you. So, hang in there and keep pushing.

Previous articleKurds refuse to back al-Maliki as his insistence on holding power and Iranian regime meddling
Next articleIAEA: Iran activates enrichment equipment