NCRI – More than three million Iraqi Shiites signed a declaration calling for eviction of the Iranian regime and its agents from Iraq and removal of restrictions imposed on the members of the People’s Mojahedin Organization of Iran (PMOI/MEK) residing in Ashraf City (home to the members of the PMOI in Iraq).

The following is the text of the declaration which was announced at the fourth annual session of the Solidarity Congress of the Iraqi People that was held in Ashraf and was attended by more than 1,000 representatives of 138 Iraqi parties as well as political and social associations:

NCRI – More than three million Iraqi Shiites signed a declaration calling for eviction of the Iranian regime and its agents from Iraq and removal of restrictions imposed on the members of the People’s Mojahedin Organization of Iran (PMOI/MEK) residing in Ashraf City (home to the members of the PMOI in Iraq).

The following is the text of the declaration which was announced at the fourth annual session of the Solidarity Congress of the Iraqi People that was held in Ashraf and was attended by more than 1,000 representatives of 138 Iraqi parties as well as political and social associations:

Declaration of Iraqi Shiites
On the need to Expel the Iranian Regime from Iraq and
Removal of Restrictions Imposed on its Strategic Counterbalance, the People’s Mojahedin Organization of Iran 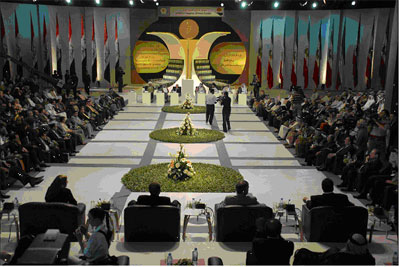 For the past five years, children of our homeland – especially in the southern provinces – have suffered from the most severe hardship ever witnessed in history in the form of slaughters, dreadful suppression, and immeasurable plunder all caused by Iranian rulers. However, they never surrendered to these criminals and never missed an opportunity to reveal these oppressions and atrocities.

“Today, it is beyond a shadow of doubt that all these crimes and atrocities are planned by the Islamic Revolution Guards Corp (IRGC), the terrorist Qods Force, the Intelligence Service, and the embassy and the consulates of the Iranian regime in Iraq. Iranian rulers explicitly announce that slaughter and terror in the “streets of Baghdad” is their “superiority” over the United States. (Hossein Shariatmadari- 27 Aug. 2006).

People of Iraq and its political leaders, Shiite or Sunni alike, cry out loud:

– “The influence and meddling of Iran in Iraq is very deep, special and extraordinary.” (Dr. Tariq al-Hashemi- 15 Jan. 2007)
– “Iran’s role in Iraq is regrettable. Iran severely meddles in Iraq.” ( Dr. Ayad Allawi-30 June 2007)
– “The aggression of militias supported by Iranian money, equipment and logistics is incessant.” (Dr. Adnan Dulaimi-14 Aug. 2007)
– “The Iranian regime is hideously meddling in Iraq; Iranian Intelligence Ministry silences all voices and assassinates any nationalistic personality or tribal sheikh that is against it.” (Dr. Saleh Mutlaq- 20 Jan. 2008)
– “Ahmadinejad’s remarks are as if Iraq is Iran’s own property for him to rule.” (Nadim al- Jaberi — 30 Aug. 2007)

But 'the most painful dagger the Iranian regime has stabbed in our back is the shameful misuse of Shiite religion in order to achieve its ominous objectives. Through this anti-Islamic and inhumane measure, they have targeted our national interests and wickedly began planning to separate the southern provinces from Iraq.”(Declaration of 300,000 Shiites of Iraq’s southern provinces-November 2007)

– “We have reliable documents on Iran’s role in sending weapons to combatant groups in Iraq. We know that the Qods force of IRGC is the main tool for pursuing this policy.” (US Ambassador Ryan Crocker-3 June 2006)
– “IRGC and the Qods force are against a democratic Iraq, and the highest ranks in Iran are aware of their activities.”( Gen. David Petraeus -20 July 2007)
– “Over 100 clandestine caches of Iranian weapons have been discovered and confiscated in Iraq” and “Iran’s meddling in Iraq is unbounded.” ( Gen. Marc Lynch-May and November 2007)

Wrong address to cover its own crimes:

Iranian regime agents in Iraq, to cover their crimes and that of the Iranian regime, deceitfully give the wrong address. They accuse their opposition in Iraq, the PMOI, of terrorism, explosions, targeting civilians and murder and abduction with US forces assistance.”
All this is while everybody knows that this organization has been constrained in Ashraf under permanent control for the past five years and has been subjected to many conspiracies and attacks. Even its food, medication and fuel have been cut off since September 2005. It is common knowledge that in contrast with international law and conventions, and the International Humanitarian Law, the Iranian regime has put the Iraqi government under severe and brazen pressures to expel members of the PMOI from Iraq.

In June 1986, Mr. Massoud Rajavi, the leader of Iranian Resistance for freedom of Iran, stated in Imam Hussein’s shrine: “We have sought refuge to you and your magnanimous father Imam Ali on Iraq’s soil.”

We, the signatories, testify that the attitude of the Iranian regime and its proxies toward the PMOI is reminiscent to the atrocities of those who killed Imam Hussein and his followers.
Considering the fact that on 25 October 2007, the US State and Treasury Departments officially announced that the Iranian regime’s Defense Ministry, the IRGC, and its Qods force are designated for proliferation activities and support for terrorism,
and bearing in mind the verdicts of the European Court of Justice and the British court for annulling the terrorist label against the PMOI, which itself was a result of the policy of appeasement towards the Iranian regime, we reiterate that:

– “the PMOI, which believes in real Islam that is against fundamentalism and extremism, and as the alternative and the balancing weight before this regime, and as a barrier and strong obstacle against the regime’s meddling have stood with the Iraqi people.” (Declaration of 300,000 Shiites in southern Iraq- November 2007)

– The people and democratic forces of Iraq, however, in their serious endeavors to neutralize the danger of fundamentalism and terrorism, find a natural ally and partner in the geopolitics of this region of the world in the People’s Mojahedin of Iran. (Declaration by 5.2 million people of Iraq– June 2006)

We, the Shiite signatories of this declaration, emphasize and call for:

1. Expulsion of all members and agents of the Iranian regime’s IRGC, Intelligence, and the terrorist Qods Force from all governmental or non-governmental institutions of Iraq, especially the security systems and the police,
2. Closure of Iranian embassy and consulates that support terrorist operations and the imposition of Iranian regime’s dominance in Iraq.
3. Removal of restrictions from the Ashraf residents and return of the PMOI’s properties (The Hague Conventions – articles 52-53).
4. Enforcement of verdicts by the European Court of Justice and the UK Court by the European Union, and the annulment of terrorist designation of the PMOI by the U.S.