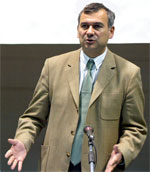 I was absolutely taken aback, when the "Islamic Republic of Iran News Network TV (2005/06/18, 10.30 AM) showed Mr. Gary Sick, presented as "Adviser of Carter’s administration" commenting on Iranian electoral process.
Paulo Casaca
Member of European Parliament
Co-Chairman of the Iran Inter parliamentary Group "Friends of a Free Iran"
Brussels, 23 June 2005
Dear Mr. Kenneth Roth,
Although you did not bother to give me any reply yet to my previous letters questioning the independence of your "inquiry" regarding the main opposition organisation in Iran, the PMOI/MEK I have to admit that your organisation does not cease to surprise me.
As we are all aware, the Iranian regime organised farcical "elections" where only a handful of regime appointed candidates could stand, where all international monitoring was forbidden and where massive fraud and rigging took place.
Fortunately, some Western leaders were not afraid of loosing juicy economic contracts from the Iranian regime and said loudly what freedom, democracy and human rights believers think about this disgraceful exercise, indeed in a very timely manner.

President George Bush, regardless of what we might think of him and his policies, certainly deserves to be praised by his clear-cut denunciations of the Iranian electoral farce and his support for democracy and the rule of law in this country.
As we all know, the Iranian theocratic regime did not quite appreciate these declarations, amongst other things, because it is not in a position to jail, torture and murder its author contrarily to what it does indoors with its fellow citizens.
I was absolutely taken aback, however, when the "Islamic Republic of Iran News Network TV (2005/06/18, 10.30 AM) showed that Mr. Gary Sick, presented as "Adviser of Carter’s administration" said:
"Personally, I was very concerned that Bush chose such a timing for attacking Iran’s political and electoral system".
"We were observing real competition between the candidates and Bush must have talked wisely and not released a too-early statement".
This, of course, is a summing up of what the various Iranian theocratic regime publicists said about President Bush declarations.
It is certainly important for anyone to understand where Mr. Gary Sick political agenda lies. It should be only a problem of major concern for American electors. However, it happens that this very same Mr. Gary Sick is chairman of the Middle East Advisory Board of "Human Rights Watch", the very same organisation that published a report attacking the PMOI/MEK.
That is, "Human Rights Watch" commissioned, to a declared and engaged militant for the cause of the Iranian regime, the supervision of a report on the supposed human rights violations committed by the main opposition to that very same regime.
It is no wonder that the report closely follows Iranian regime officials’ briefings on this organisation.
We are therefore facing a declared violation of basic rules concerning conflicts of interest, transparency and indeed human rights values commitment from your organisation.
I consider your position inadmissible.

I believe you should have made a choice between being a political engaged organisation to support political regimes (specially, when the human rights records of these regimes are like the Iranian) or to be a credible and objective organisation overseeing human rights, the incompatibility between both being obvious.
I invite you to publicly disclose your political links to the Iranian regime, so that we can better understand the reasons of your report.
(Paulo Casaca)
Co-Chairman, Friends of a Free Iran (Inter parliamentary Group)