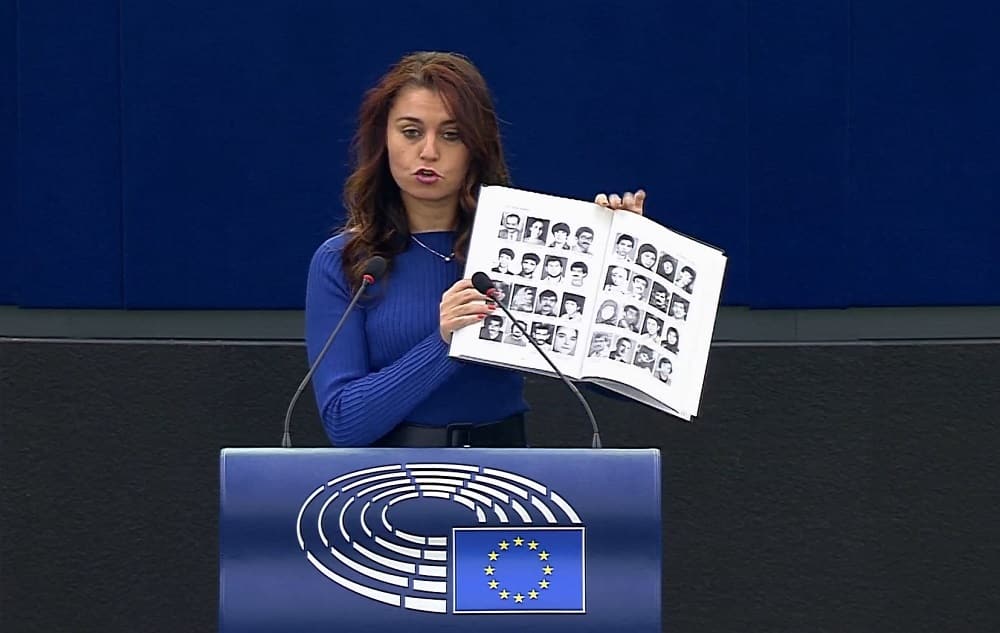 Members of the European Parliament held a formal session on Thursday, February 17, adopting a resolution condemning the rising number of executions in Iran by the mullahs’ regime. The MEPs also denounced the mullahs’ regime for the 1988 massacre of over 30,000 political prisoners and demanded an international, independent investigation into this horrific care, and the subsequent prosecution of Iranian regime officials, especially current regime President Ebrahim Raisi.

“… over political divisions here in the European Parliament, we raise our voice in defense of the Iranian people. Since 1988, the massacre, there are ongoing crimes against humanity. We speak about the so-called death penalty, but what kind of penalty is that? In many cases it is just extra-judiciary crime and simply swift executions without even the pretense of judicial or court proceedings,” said MEP Anna Fotyga, Secretary-General of the European Conservatives and Reformists Party.

“Words are not enough. Our action is needed because what we see in Iran – also with the financing of terrorists outside and meddling in the region and even in our territories – requires our action and very strong sanctions,” she added.

"Since 1988, the massacre in #Iran is an ongoing crime against humanity. We've been talking about the death penalty, but in many cases it's an extrajudicial crime—a swift execution, carried out without even pretending to hold court proceedings."

The EP resolution criticizes the Iranian regime for “at least 275 people were executed in Iran, including at least two child offenders and 10 women,” from January 1 to December 1, 2021, adding “since Ebrahim Raisi took office as president in August 2021, there has been a significant rise in the number of executions, including of women.”

“I wonder if we are being too generous to the Iranian regime because when we speak of the death penalty, even with unreserved rejection of it as this is the case, I mean it suggests that previous judicial procedure, some kind of legality. That is not the case. In fact, there is no death penalty in Iran. There are sheer executions: state murder as a form of crime against humanity,” said MEP Javier Zarzalejos of the European People’s Party Group.

“Look at the appalling repression, enforced disappearances and massive executions of political dissidents in the 1988 massacre and notice that there has been no investigation or accountability for these crimes that involve the current leader of Iran in a prominent role. Look at the horrifying record of Iran in executions: at least 275 last year, including 10 women and two child offenders. We cannot turn a blind eye,” he added.

The resolution specifically raises the cases of “Mohammad Javad, a boxing champion, was sentenced to death in January 2022 after being charged with ‘spreading corruption on Earth’;” and “Navid Afkari, a wrestler who stated that he had been tortured into making a false confession, was executed in September 2020.”

“Despite repeated calls from the international community, the authorities keep carrying out death sentences with an average of around one per day in 2021. The country is one of the few in the world that executes minors and juvenile offenders in clear violation of international law. The number of executions of citizens belonging to minorities, especially Baloch, Kurds, Arabs and Baháʼí, is disproportionately high. And the death penalty in Iran is, to a large extent, an instrument to intimidate, persecute and try to eradicate any kind of political opposition in the country,” said MEP Jordi Solé, on behalf of the Verts/ALE Group.

“I call once again on the Iranian authorities to release all political prisoners and all prisoners of conscience. The situation has only worsened since Ebrahim Raisi took power last June, with executions rising to 271 – 11 of them women. No wonder, given his well-documented role in the 1988 massacre and in the brutal suppression of the November 2019 protests. The culture of impunity has been prevailing in the country for too many decades. Iranian society deserves justice and reparation, and they also deserve to live in a free, inclusive and democratic country that respects human rights and dignity,” he added.

The MEPs also expressed their abhorrence regarding the mullahs’ “systematic use of torture in Iranian prisons” and strongly condemned “the steadily deteriorating human rights situation in Iran, especially for persons belonging to ethnic and religious minorities, based on systemic political, economic, social and cultural discrimination.”

“… women in Islamic fundamentalist regimes are the ones who pay the highest price. I have in my eyes the images of a shocking video, where a husband beheading his seventeen-year-old wife, accused of adultery, walks the streets smiling, exposing his head like a trophy. In Iran, a man who kills his 14-year-old daughter faces eight years in prison; a woman who takes off her veil risks up to 24,” said MEP Susanna Ceccardi of the Identity and Democracy Party.

In her speech she also referred to the 1988 massacre of over 30,000 political prisoners across Iran, including many young men and women, some even high school and college students.

This strong criticism came in parallel to the MEPs voicing grave concerns regarding the “large-scale enforced disappearances and summary executions of political dissidents which took place in 1988 have to date not been the subject of any investigation and no one has been held accountable for them.”

“Iran is believed to execute the most people per capita in the world, and this is a country which of course doesn’t have a fair or independent judiciary. I would appeal to the leaders of Iran, but the President of Iran was a member of the Death Commission in the 1988 massacre, in which 30 000 political prisoners were murdered, judicially,” said MEP Radosław Sikorski, a former foreign minister of Poland.

“There are political prisoners in Iran who had dared merely to ask about that massacre, people like Maryam Akbari Monfared, Qolam-Hossein Kalbi, Saeed Massouri, Afshin Baeemani, Saeed Shahghal-eh. Mr. Raisi, the fate of these people is a testimony to your status as a butcher and you will be punished for it, in this world or the next,” he added.

On the Iranian regime’s ongoing support for global terrorism the MEPs highlighted the fact that the “U.S. State Department outlined that Iran remains the world’s largest state sponsor of terrorism in recent years, providing political, financial, operational and logistical support to a variety of groups listed in both the EU terror list and US list of foreign terrorist organizations.”

#EP adopted my AMs to the resolution on #Iran, to include brutal killings of Mona Heydari & Romina Ashrafi, the destabilising role of the Iranian regime across the Mid East, state sponsorship to a variety of terrorist groups, responsibility for the deaths of civilians in 🇾🇪🇸🇾🇮🇶.