The Association of Exiled Iranian Societies in Germany, supporters of the People’s Mojahedin Organization of Iran (PMOI, Mujahedin-e Khalq or MEK) wrote a letter to Dr. Angela Merkel, Germany’s Chancellor, and urged her and the members of Germany’s Bundestag to condemn the Iranian regime’s criminal cover-up of the coronavirus outbreak in Iran. The MEK has announced that so far, the coronavirus outbreak has claimed the lives of over 18,600 Iranians. The MEK supporters also urged the German government and the international community to take immediate action in helping the Iranian people. The translation of this letter is below.

Appeal to Dr. Merkel, the federal government and members of the German Bundestag

By condemning the crime against humanity, you will help the people affected by the coronavirus in Iran.

According to the latest reliable news, as of Friday, April 3, 2020, 16,800 of our countrymen in 238 cities have died as a result of the Coronavirus infection. Of these, more than 1,900 alone in the capital Tehran, which, with its 9 million inhabitants, is facing a major humanitarian catastrophe according to the regime’s leadership, the “Danger of the Coronavirus Storm”. While the deaths are said to be 3,294, the World Health Organization estimates this number as one-fifth of reality.

The main cause of the spread of the Coronavirus virus and the disastrous death of our compatriots is not due to the lack of medical facilities, specialist staff or hospital beds, but to the inhumane policies of the ruling dictatorship in Iran under Khamenei and Rouhani. Instead of proclaiming the outbreak of the virus in Iran, alerting the public and calling on the health system to be ready, the spread of the virus is deliberately kept secret. The regime slanders and denies the existence of coronavirus-infected people in the country. The problem is presented as small, insignificant and short-lived.

Instead of hiring responsible specialists and experts to manage and control the crisis, the coronavirus is declared a conspiracy by foreign powers, aliens or goblins. Instead of acknowledging the dangers, the blame for the virus is shifted to other countries to divert public interest from the regime’s failure.

The regime’s management of this issue is devoid of any sympathy for the people of Iran and takes no account of morality or human rights.

Khamenei lied to the people to ensure the demonstrations marking the anniversary of the mullahs’ takeover and maximum participation in the general election on February 21, 2020. Based on the documents of the National Council of Resistance of Iran which is published in  Frankfurter Allgemeine of March 31, 2020, Khamenei concealed or denied the coronavirus pandemic in a brazen, inhumane act for two to three weeks, so that this virus could spread everywhere (Frankfurter Allgemeine Newspaper dated March 31, 2020, page 4).

At the height of the coronavirus epidemic, Khamenei and Rouhani not only did not prevent Mahan Air’s 54 flights to Wuhan / China but even accepted that more and more sick people were flown to Iran from this area every day and were able to travel freely in the country. Dr. Adham Ismail, the WHO representative for Iraq, said that Iran is responsible for the spread of the virus in 17 countries in the region, including Iraq.

Instead of warning the population of major danger, Khamenei and Rouhani downplayed the threat from the virus. Khamenei said: “In our opinion, this disaster is not very great … one can solve many problems with prayers, appeals, and intercessions …”

Instead of managing the crisis and the impending humanitarian catastrophe, Rouhani said, “The virus will go away in three days.” At two independent points in time, he also claimed, “We have already reached the height of the epidemic”. He stopped taking the right measures to quarantine the city of Qom, the epicenter of the coronavirus in Iran, and said, “We don’t have anything like quarantine.” While hundreds of people die every day from the consequences of the coronavirus infection, he claims, contrary to the statements of the specialists and experts, that he has 20,000 empty hospital beds and thousands of empty intensive care beds.

Khamenei’s personal fortune is over $100 billion. Hundreds of billions of dollars in withheld funds in the accounts of Revolutionary Guard institutions and Ali Khamenei-affiliated bodies, such as the Mostazafan Foundation and Astan-Quds, are spent exclusively on expansionism and warfare in Iraq, Syria, Yemen, and Lebanon. However, people are fooled into believing that the country has no means to procure medicines and equipment to combat the coronavirus crisis and that the deaths of 15,000 coronavirus patients are due to international sanctions. Sanctions that have been imposed on the regime for violations of human rights, terrorism, fundamentalism, and its ambitious nuclear project.

Khamenei and Rouhani have given medical equipment, masks, and the items which were donated by other countries to their oppressive forces. Equipped with this medical equipment, they maneuver on the streets of Tehran to intimidate people and dissuade them from any unrest and uprisings.

The companies affiliated to Revolutionary Guards exported large quantities of masks to Turkey on the eve of the Coronavirus outbreak due to high earnings, while dozens of doctors and nurses in the country fell ill and died of Coronavirus due to a lack of basic protective equipment.

In recent weeks, dozens of young people who have posted Khamenei and Rouhani’s lies on social media have been arrested and sent to the torture chamber.

Tens of thousands of prisoners, especially political prisoners, are currently at high risk of contracting the coronavirus, while the media, including German newspapers, are shamelessly faking the belief that 70,000 prisoners have been released. At least 10 inmates, including 6 women, have died as a result of coronavirus infection at Fashafoyeh Prison in Tehran. In just a week, inmates in at least 8 Iranian prisons in Iran rebelled out of fear of the coronavirus, and some of them were executed. We are facing a major human disaster and a crime against humanity in Iranian prisons.

– To condemn the regime’s criminal handling of the coronavirus and its cover-up of the death toll and the number of infected.

– To condemn the expulsion of “Doctors Without Borders” from Iran by Khamenei’s instruction. This inhumane act is intended to continue to conceal the true number of deaths and infections.

– Pressure the Iranian regime to accept international aid under the supervision of the World Health Organization and prevent a humanitarian disaster in our country. 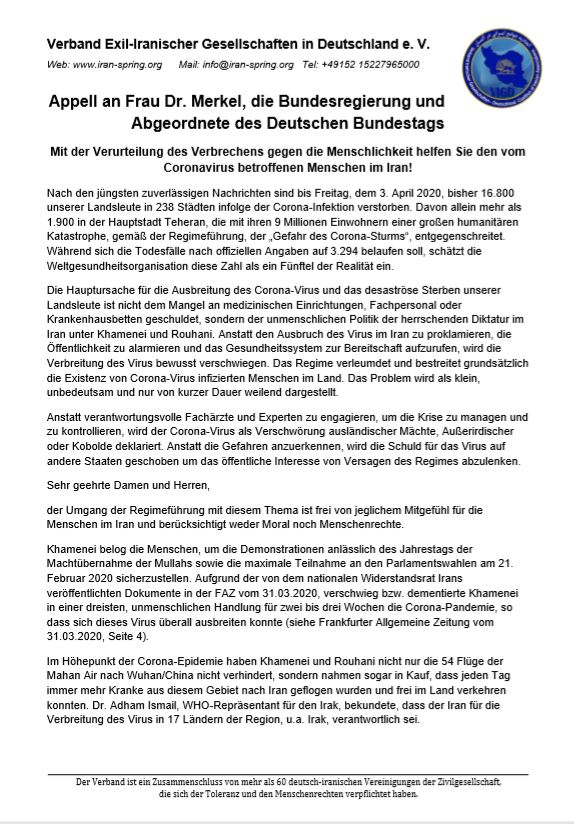 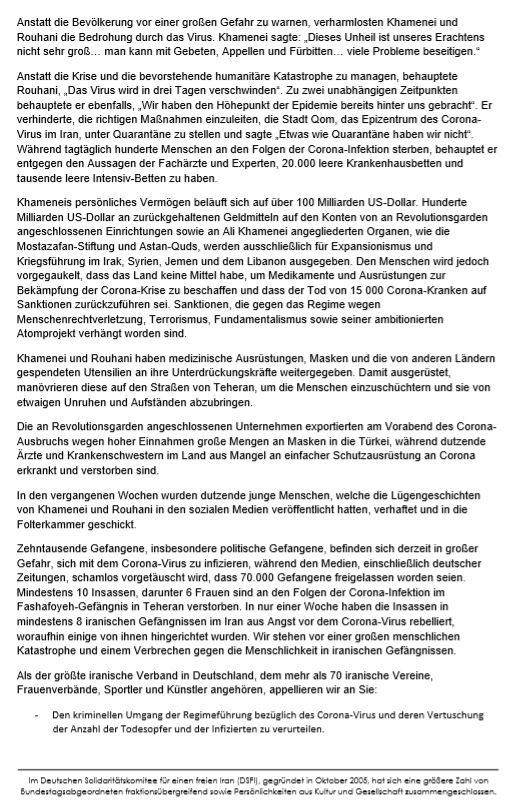 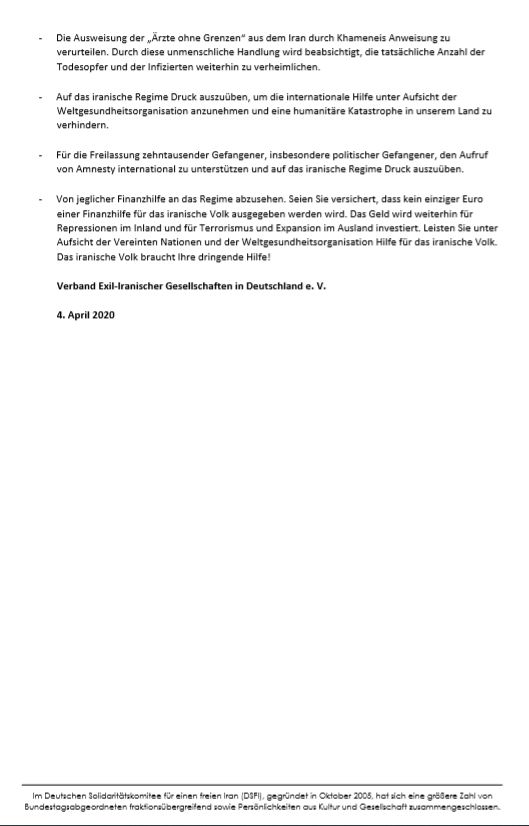 The recent activation of the United Nations sanctions snapback mechanism has terrified the Iranian regime. But the mullahs are mostly terrified of the opposition...
Read more
News: Iran Resistance