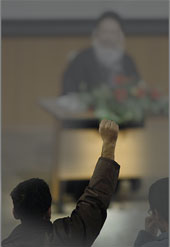 A few days after Iran’s election farce, the mullahs’ claims about a huge turn out last Friday and efforts to lure voters to polling stations is drawing ridicule everywhere.

Based on reports and eyewitness accounts of its observers at 15,000 polling stations across Iran, the main Iranian opposition group, the Mujahedeen-e Khalq put the turn out at less than 10 percent.
The brewing infighting this week among rival factions put the spotlight on a glimpse of vote fraud. The cunning mullahs employed a variety of methods including,

* The use of 5,000,000 National ID cards of the deceased
* Voting with unofficial ID Cards.
* Voting with passports and birth certificates outside Iran to enable the mullahs’ men to vote twice.
* Paying 15.5 million dollars to 300,000 members of the paramilitary Bassij Force to vote is support of a particular candidate.
* Buying Votes for $35 dollars each in many provinces like Mazandaran in the north.
* Interference by the Revolutionary Guards, the Bassij, Supreme Leader Khamenei, his son, and his office.
In an article in the National Review, Michael Ledeen quoted reports from the Iranian Interior Ministry, who said seven million, or 14 percent, had voted.
The boycott was so widespread that even a few journalists, known for their favorable reporting on Iran, acknowledged that the turn out was less than four or even eight years ago.
Another major development is that the infighting has aggravated the schism at the top, something that Mrs. Rajavi had predicted.
So deep the crisis has become that rival factions are now exposing each other. Defeated candidate and former Parliament speaker accused the watchdog Guardian Council of a "coup", and resigned from his posts in protest against interference by the Revolutionary Guards and Khamenei’s son in the elections.
Khatami’s faction pointed to the abuse of treasury and country’s financial resources to turn the process into a "managed election".
There is another angle to all of this. If there were any doubts that this election was a travesty of the electoral process, it has now become crystal clear that the choice is between two terrorists. In addition, for this reasons, Iranians will boycott the vote.
People of Iran who have experienced this regime with their flesh and blood will not fall for the appeasers who urge them to vote for Rafsanjani in order to confront fundamentalism. Here, the case in not, as they suggest, choosing between the lesser of the two evils. The Iranian regime is evil in its entirety.
A the regime’s number 2 and president for eight years, Hashemi Rafsanjani shares responsibility for the execution of 120,000 political prisoners. For his part, Ahmadinejad fired coup de grace into the same prisoners. While Rafsanjani ordered assassination of the dissidents abroad, Ahmadinejad carried out the orders.
Rafsanjani ordered the serial murder of the intellectuals and writers. Ahmadinejad, and his accomplice, the notorious Deputy Intelligence Minister Saeed Emami, carried out the killings.
Rafsanjani and his family have plundered billions of dollars of the country’s wealth while Ahmadinejad pocketed hundreds of millions of dollars a mayor of Tehran.
Those still bent on investing in this moribund regime are making an error of monumental proportions. Instead of trying to persuade the Iranian people to accept this regime, they should respect the desires of the Iranian people.
Regardless of the outcome of the elections, the regime has begun to falter. As President, Rafsanjani cannot stop this trend.
Mohammad Mohadessin
Foreign Affairs Committee Chair
June 23, 2005