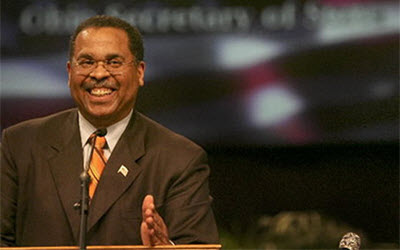 NCRI – Writing on Tuesday in the American Thinker, Ken Blackwell, the former U.S. Ambassador to the United Nations Human Rights Commission, said both Republican and Democratic parties can unite behind the National Council of Resistance of Iran (NCRI) in pursuing “the universal imperative to confront the threat of Islamic extremism.” Ambassador Blackwell argued that the NCRI had already united “officials from several presidential administrations” of both parties in “common cause” against fundamentalist terrorism.

Such coalition-building was essential, he said. As NCRI President Maryam Rajavi, “a devout and profoundly anti-fundamentalist Muslim woman leader,” has said, “moderate democratic Islam is the antidote to the violent conduct of extremists.” This was, Ambassador Blackwell continued, “an Iranian voice Republicans and Democrats should heed.”

The NCRI’s credentials in the confrontation with extremism were impeccable. Ambassador Blackwell reported that, “Some 120,000 of the activists of the People’s Mojahedin Organization of Iran (PMOI or MEK), the main constituent of the NCRI, have been executed in Iran in the past three decades.”

At the NCRI’s rally in Paris on July 9 – “ironically bigger in size” than both US party conventions – the NCRI will outline its ten-point plan for “standing up to the egregious conduct of the Iranian regime, fighting the Islamic State, facilitating the removal of embattled regional dictators like Bashar al-Assad, and making sure that the peoples of that region have strong, recognizable alternatives to the extremist groups currently vying for dominance,” Ambassador Blackwell said.

The ten-point plan “includes the establishment of truly democratic governance in the Middle East, the separation of religion and state, an end to institutional misogyny, and the promotion of other principles that hold equally obvious appeal for all Americans, and indeed for all civilized peoples of the world,” he continued.

The Free Iran rally in Paris, Ambassador Blackwell said, will see Iranians join “a bipartisan American delegation, along with delegations from the EU and various nations of the world,” together with “the moderate Syrian opposition and other anti-Islamist movements.” On their return, US participants would be able to convey to their colleagues Mrs Rajavi’s perspective on “the destructive role of Iran, Assad and Iraqi Shiite militias in the spread of extremism throughout the region; and the means by which that spread can be halted,” the Ambassador concluded.