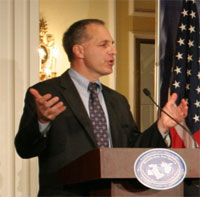 NCRI – The Voice of America’s Persian service reported this weekend that on Saturday several former officials of the US government attended a session to demand the delisting of the Mujahedin-e Khalq (MEK) from the list of the State Department’s terrorist organizations.

In an interview with VOA, Louis Freeh, the former Director of the FBI, said: Currently, the US has no reliable evidence demonstrating terrorist acts carried out by the MEK in recent years.

He added: Since in the US the review process has to be legal, the State Department should delist the MEK eventually because it has no legal basis for maintaining the MEK on the list.

Among the speakers at Saturday’s session were Ed Rendell, former Governor of Pennsylvania, General Hugh Shelton, former Chairman of the Joint Chiefs of Staff, and Louis Freeh, former Director of the FBI, the VOA added.

Previous articleEmpower Iranians vs. Tehran
Next articleGeneral Hugh Shelton: I say, Wake up, State Department, take the MEK off the FTO list today