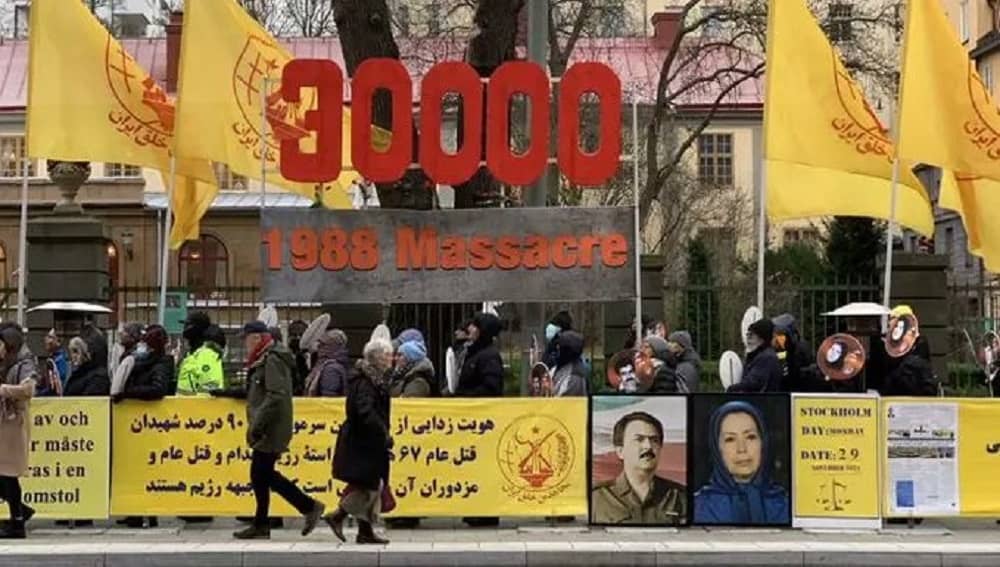 The former Iranian prison official Hamid Noury gave testimony in his own defense for a fifth time on Wednesday, answering questions from Swedish public prosecutors regarding the 1988 massacre in Iran’s prisons, his own role in the massacre.  Noury stands accused of war crimes and mass murder on account of participating in that massacre by leading political detainees to the “death corridor” at Gohardasht Prison, to be executed in groups of a dozen or more.

Noury’s defense so far has switched back and forth between denying the most basic facts of the case and acknowledging the underlying the crimes of Iranian regime’s courts and the clerical regime. Before he took the stand, more than a dozen other witnesses testified in Stockholm and in Durres, Albania regarding their interactions with Noury and his fellow jailers before, during, and after the 1988 massacre. Nevertheless, Noury attempted at one point to claim that he was on leave from his position during the period in question. He also denied the very existence of Gohardasht Prison and referred to the massacre itself as “made up and undocumented.”

Noury’s remarks reflect the inherent secrecy of Iran’s judicial system, not any serious dispute about the severity or focus of the massacre. The MEK itself has carefully investigated the details via a network spanning much of Iranian society. In this way, it has identified the sites of mass graves in at least 36 different cities. The existence of such graves has been acknowledged by international human rights organizations like Amnesty International, which has also warned about the phenomenon of regime authorities ordering construction projects to conceal evidence of the 1988 massacre.

Those projects exist as part of a much larger cover-up that saw authorities ban the very mention of the mass killings for the better part of three decades. This conspiracy of silence was challenged anew in 2016 with the release of a contemporary audio recording featuring the voices of many high-level participants in the massacre, as well as Hossein Ali Montazeri, the only major regime official to voice dissent about the purge of dissidents and the underlying fatwa issued by then-Supreme Leader Ruhollah Khomeini. At the time, Montazeri was slated to take over the supreme leadership, but following the massacre, he was driven out of the regime entirely.

Hamid Noury mentioned both Montazeri and the fatwa in two trial sessions, alleging that Khomeini’s former heir-apparent fabricated the fatwa in order to defame the regime. However, this testimony contradicts statements by a number of other regime officials and loyalists who have defended Khomeini’s call for the mass execution of dissidents whom he held responsible for “enmity against God.” Some of those have even gone so far as to say that the supreme leader’s religious edict conveyed “God’s command” and therefore could not be questioned.

Despite his attempts to dispute the nature of Khomeini’s fatwa, Noury’s further testimony communicated very similar devotion to its contents. Much of his time before the Stockholm court involved praising regime authorities and maligning the MEK, while also emphasizing the strength of the conflict between the two. “If I mention the name of the People’s Mojahedin, they will arrest me when I enter Iran,” he said at one point, adding that the same fate would befall anyone else who uses the organization’s name inside Iran. Noury even urged the prosecutor to avoid mention of that name and claimed, “It will create a problem for me.” Yet he later went on to refer to the penal code that punishes basic language as a “holy system”

Noury unapologetically explained the clerical regime’s use of brutal corporal punishments such as flogging for crimes as insubstantial as lying. “Depending on the type of crime, they are dished out 30 lashes, 50 lashes, 70 lashes to 100 lashes,” he said, though at least one witness for the prosecution reported having received 160 lashes at Gohardasht Prison while Noury was present.

The former prison official also spoke freely about the use of solitary confinement and white torture as forms of extrajudicial punishment, noting that both this and flogging were common strategies for dealing with inmates who flouted prison guidelines, communicated with one another using Morse code, or gathered in groups for athletics or for prayers. “If it was determined that [a prisoner] had done something wrong, [the judge] would have asked for him to be flogged. He would order him to be whipped. He could send him to solitary confinement for a month, two months, three months,” Noury said.

Such harsh punishment for collective prayer, coming from a judiciary tasked with enforcing a “holy system,” reflects the religious content of the fatwa the existence of which Noury denied. The document refers to members of the MEK as “waging war on God,”. In a follow-up letter, he ordered regime authorities to “annihilate the enemies of Islam immediately.”

In recent months, legal scholars have taken part in conferences on the topic of the 1988 massacre and have argued that its apparent religious motives qualify it as an instance of genocide against communities of faith that challenge the regime’s hardline theocracy. The conferences in question were organized largely in response to the presidential campaign, and later “election” of Ebrahim Raisi.

Raisi’s installation was part of a process whereby Khamenei has consolidated power among ultra-hardline figures, including participants in the 1988 massacre. Raisi’s participation occurred at the highest level, as he was one of four officials to serve on the Tehran death commission, which had jurisdiction over Evin and Gohardasht Prisons.

In June, Amnesty International released a statement lamenting that Raisi had “ascended to the presidency instead of being investigated for the crimes against humanity of murder, enforced disappearance and torture.” This, it added, was a “grim reminder that impunity reigns supreme in Iran.”

Hamid Noury’s prosecution began more than a month later and presented the first serious challenge to that impunity. No other perpetrator of the 1988 massacre has faced legal consequences for what has been described as one of the worst crimes against humanity since World War II. But when Noury was arrested upon visiting Sweden, it affirmed that the massacre is subject to “universal jurisdiction,” which allows for serious violations of international law to be prosecuted at any court, regardless of where the crime took place or what nationality the victims held.

Supporters of the MEK are now calling for that same principle to be invoked should President Raisi ever set foot in the European Union or North America.