In a conference the majority of the French National Assembly announced its support for the National Council of Resistance of Iran – Paris – May 18, 2011 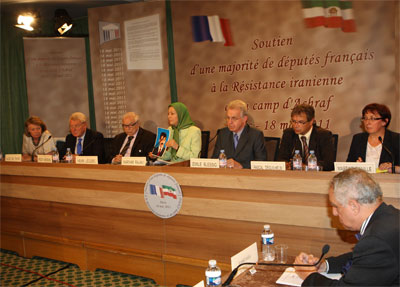 Parliamentary Committee for a democratic and secular Iran

The conference held today at the Maison de la Chimie in Paris released a statement in support of a majority of MPs representing all political diversity of the National Assembly. This statement calls on the French government to “recognize the resistance against the religious dictatorship in Iran and to consider establishing a dialogue with the National Council of Resistance of Iran.”

This parliamentary initiative that is particularly important in current conditions in the Middle East and the Arab spring, comes in the week that the anti-terrorism investigative judges have quashed, after a ten-year process, all accusations of terrorism or financing of terrorism brought against 24 members and sympathizers of the National Council of Resistance of Iran. This ordinance recognizes the legitimate right to resistance against tyranny and nullifies a decade of disinformation, inspired by the Iranian regime against the Iranian Resistance.

In their declaration, MPs point out that “the Iranian regime is the main obstacle to democracy in the region and attempts to divert the Liberation uprisings in the region towards Islamic fundamentalism.”

Therefore, while stressing the failure of the policy of appeasement towards the regime and rejecting any foreign military intervention, members are supporting the Third Option proposed by Mrs. Maryam Rajavi, president-elect of the NCRI, which calls for Democratic Change led by the Iranian people and their organized resistance.

On April 8, The Iraqi forces on behest of the mullahs launched an attack against Camp Ashraf which houses 3,400 members of the People’s Mojahedin Organization, the main opposition movement of Iran intending to annihilate the organized resistance at the order of Iranian mullahs. The UN High Commissioner for Human Rights condemned the attack that left 35 dead among the defenseless people, and called on an independent investigation.

For several months, the French MPs alerted the Elysee Palace and the Ministry of Foreign Affairs about the risks of a humanitarian disaster in the camp. The tragedy of April 8 unfortunately proved that they were right. The French government has a duty to make every effort to avoid further bloodshed in the camp.

Therefore, members of the Parliamentary Committee for a secular and democratic Iran support the appeal by Mrs. Maryam Rajavi to President Sarkozy to take the initiative of international protection for defenseless residents of Ashraf, in a humanitarian context.

We also declare our support for the plan proposed by the European Parliament delegation sent to Iraq headed by MEP Struan Stevenson and consider it compatible with the views of the parliamentary majority on the protection of Ashraf residents. This plan foresees the opening of negotiations between all parties resulting in resettlement of Ashraf residents to third countries where their safety will be guaranteed. That’s why we ask for the return to normality to Ashraf prior to facilitating the implementation of this plan .From our point of view, any displacement of Ashraf residents inside Iraq is only a new pretext for further killings. We ask the UN to protect the safety of the residents in accordance with this plan.

Delisting of the People’s Mojahedin Organisation of Iran (PMOI) from the terrorist list of the European Union in 2009 and the cancellation of charges of terrorism leveled against the Iranian Resistance in France in 2011, indicate that the French parliamentarians who rely on values of the Republic, have worked towards securing the rights and freedoms and have contributed significantly in achieving these advances.

Parliamentary Committee for a Secular and Democratic Iran