Iran: Clerical Regime’s FM Begs Belgian and Swedish Foreign Ministers to Release of a Terrorist Diplomat and a Mass Murderer

Meeting With the Foreign Minister of a Regime That Has Executed 120,000 Political Prisoners and Caused a Bloodbath in the Region Will Embolden This Regime To Intensify Its Crimes at Home and Abroad

Today, Hossein Amir-Abdollahian, a terrorist Quds Force functionary, who is now the mullahs’ Foreign Minister, met with the Belgian Foreign Minister on the sidelines of the Munich Security Conference. According to Fars News Agency, the status of Assadollah Asadi, a terrorist diplomat sentenced to 20 years in prison for plotting to bomb an Iranian Resistance rally in Paris, was “the focus of Amir Abdollahian’s conversation with his Belgian counterpart.” “Amir Abdollahian explained our country’s positions and views on this issue to his Belgian counterpart,” the regime’s foreign ministry website wrote.

On the same day, Abdollahian met with the Swedish Foreign Minister to discuss the case of Hamid Noury, a henchman involved in the 1988 massacre. He said, “It is unacceptable that bilateral relations between our countries are a target of Mujahedin-e Khalq (MEK)’s conspiracy.”

Abdollahian’s desperation in begging for the release of a terrorist diplomat and a jailed henchman again shows that the clerical regime’s diplomatic machine serves to export and incite terrorism abroad and justify and facilitate killing and repression inside the country.

In his leaked audiotape, Javad Zarif, Abdollahian’s predecessor, underscored in March 2021, “Most of our Foreign Ministry ambassadors have a security structure. Our Ministry of Foreign Affairs has been facing security issues since it began operating. The Foreign Ministry’s agenda has been a political-security agenda since the beginning of the revolution. In the 1990s, they closed down the Ministry’s economic directorate and instead created regional directors whose tendencies were more political and security-related.”

For the past three decades, Abdollahian has always carried out Qassem Soleimani’s orders and has been in constant contact with Hassan Nasrallah, the Secretary-General of the terrorist Hezbollah and other regime mercenaries in the region. Following Assadi’s arrest and the imposition of sanctions against the regime by the EU, Abdollahian, as the then special aid to the Majlis (Parliament) Speaker and the director-general of Majlis’s international affairs, boasted, “The westerners must receive a shock to understand that we are not going to stay on JCPOA’s one-way tunnel. Europe, a safe haven for the MEK today, should receive a prudent, but a shocking message,” reported Mizan News Agency on January 10, 2019.

Meeting with the Foreign Minister of a regime that has executed 120,000 political prisoners and has caused a bloodbath in the region will embolden it to intensify its crimes at home and abroad. 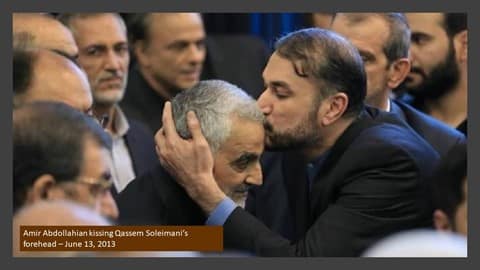 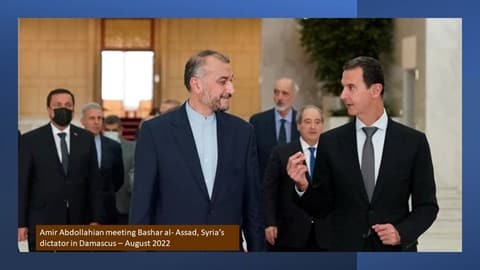 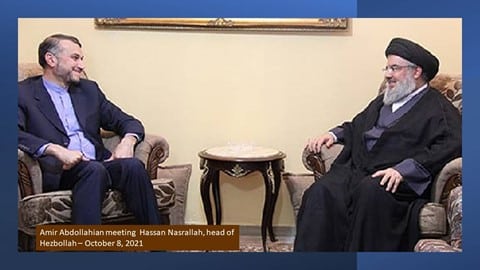