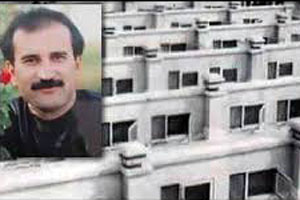 Their website wrote: “The incident of Ward 350 and its extensive coverage by anti-revolution media prompted us to study and learn more about some of these prisoners and their support for the People’s Mojahedin Organization of Iran.”

Afkar News added: “One of these prisoners is Gholamreza Khosravi, born in 1961 in the city of Abadan who was arrested for the first time in August 1981 on the charge of having a connection with the Monafeqin grouplet (derogatory term used by mullahs’ regime for the People’s Mojahedin Organization of Iran – PMOI / MEK) and was condemned to six years in prison.

“However, after his release, he not only showed no remorse, but continued his activities in support of the PMOI (MEK) grouplet until 2007 when he was once again arrested, this time in Rafsanjani, on a charge of espionage and financial assistance to this group and was subsequently sent to prison. In his confessions, Khossravi displays his hatred and spite for the Islamic Republic of Iran’s system, he acknowledges his connection with the terrorist PMOI (MEK) grouplet, and boasts of his enmity for the Islamic Republic of Iran (the mullahs regime). All in all, he introduces himself as a wholehearted PMOI (MEK) supporter.”

This state-run website adds: “However, the question that we keep pondering is why is it that despite the clear connection of these people with PMOI (MEK) and proof of their activities against national security, the judiciary forces are so lenient with them?

“For these people who are the pawns of terrorist groups, their actions against national security have been proved beyond doubt, they have shown no remorse in prison, and even continued with their espionage activities, so what verdict should be given???”

Ghomlamreza Khosravi is one of these prisoners who was beaten in Ward 350 on April 17 and then transferred to solitary confinement.

Concern for the health of Mr. Gholamreza Khosravi, who continues to be on a hunger strike, has increased.

On Monday, despite the referral of Mr. Khosravi’s wife who was kept waiting for several hours, she was not permitted to see her husband. Mr. Khossarvi, along with nine other political prisoners, is still incommunicado and prohibited from having visitors.

According to one of the members of Gholamreza Khosravi’s family, he has been injured in the face and has developed hearing problems, and due to baton blows to his body, including his chest, he is severely injured.

Mr. Khosravi is among the political prisoners of the 1980s who was again arrested in 2007 for his connection with the PMOI (MEK) and condemned to three years of hard labor in prison and a three-year of suspended sentence. However, while he was serving his prison sentence, another charge was brought against him and he was condemned to death for Moharebeh (enmity towards God).