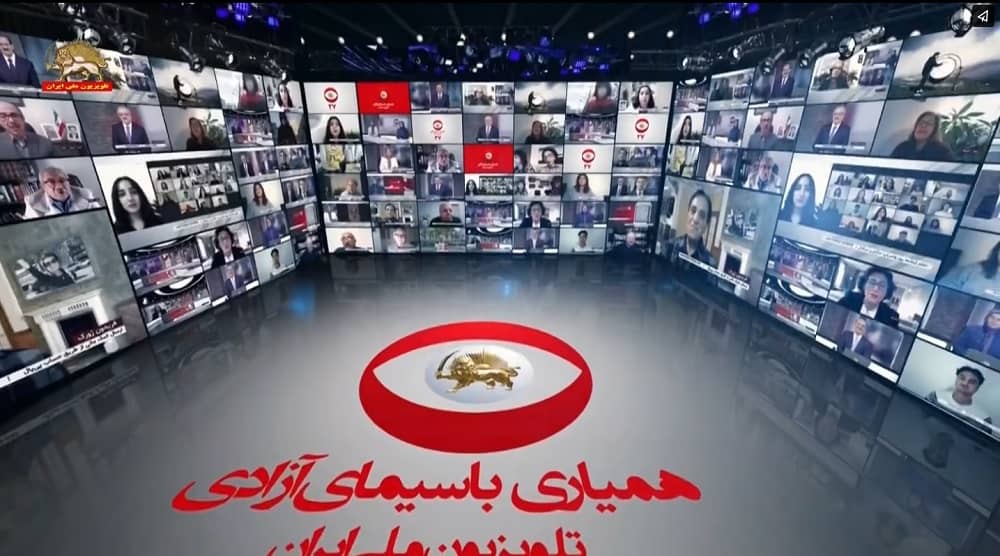 On January 13, Simay-e Azadi, or INTV, an Iranian opposition satellite channel, held its 27th telethon, which lasted until January 18. Despite hundreds of phone lines dedicated to the initiative, many Iranians from inside the country and abroad had to wait for hours to participate and express their support for the network that covers and raises awareness about the Iranian Resistance’s struggle for freedom.

Simay-e Azadi, the first and oldest Persian satellite network, broadcasts from Europe and has a vast audience inside and outside Iran. Also known by its English acronym, INTV, the Iranian opposition’s satellite TV  has been vigorously fighting against the regime’s censorship and high-intensity jamming for years.

The network is also the only Persian-speaking media platform that operates independently. Relying solely on public contributions, INTV has been able to broadcast the news and cover reports that only serve the interests of the Iranian people and their Resistance.

Simay-e Azadi has played a pivotal role in the recent uprising, echoing the voice of the Iranian people who reject the ruling theocracy and the decayed monarchy system by chanting slogans such as “Down with the oppressor, be it [supreme] leader or Shah.”

The telethon witnessed an impressive geographical spread of calls. Iranians from 41 countries and from different ethnic groups inside Iran called in and contributed morally and financially to INTV.

The telethon lasted for nearly 72 hours, with hundreds of telephone lines available for people to participate. In addition, many Iranians tuned in using social media platforms such as Telegram and Skype.

This telethon, held amid the nationwide Iran uprising, featured many calls by the defiant youths from inside Iran and brave members of the Resistance Units, an internal network of the Mujahedin-e Khalq (MEK), which has been a major driving force behind the ongoing nationwide protests.

While the ruling theocracy brutally punishes the slightest contact with Iranian Resistance, MEK supporters from inside Iran pledged to continue fighting for freedom inside Iran.

Daniel from Ahvaz said, “INTV has always been, is, and will be the voice of the protesting youths and Resistance Units. I ask all my compatriots to participate in this donation.”

#FreeIranTelethon – 2nd day
Danial, Ahvaz@simayazaditv has always been, is, and will be the voice of the protesting youths & Resistance Units.
I ask all my compatriots to participate in this donation. #IranProtests #IranRevolution pic.twitter.com/bpn1kJI6kh

Hamed from Karaj said: “I want to make a  donation. I am a teacher and a viewer of the Simay-e Azadi. The INTV is the voice of all different classes of Iran.”

Some who couldn’t offer any financial support vowed to continue their efforts in conducting reports for the TV channel. “I am an INTV journalist, and I will continue my work to reflect the voice of the Iranian people to the world,” said one of the callers.

INTV’s telethon witnessed many heartwarming yet moving calls by many Iranians, particularly from inside Iran. Some callers made contributions while they were suffering from the country’s economic crunch.  Pegah from Azarbaijan said: I donated $100 that I received as my birthday gift. Although I am an unemployed educated woman, I believe it is more important to contribute to the Simay-e Azadi.”

“Three other members of the Resistance Units and I support Simay-e Azadi. I donate 150 million rials. This is small, but I urge my compatriots abroad to compensate on our behalf.”

The MEK supporters and freedom-loving Iranians living abroad welcomed this call, some making contributions of as much as half a million dollars.

1. #FreeIranTelethon – 2nd day
Hamed from Karaj
I participate in this donation. I am a teacher and a viewer of @simayazaditv. This TV is the voice of all different classes of Iran. #IranProtests #IranRevolution pic.twitter.com/HqiTb2tfCq

The 27th INTV telethon also featured a wide range of different participants, varying from Iranians with backgrounds in academia, physicians, engineers, CEOs, and directors to youths who have not seen their homeland but whose heart goes out to their countrymen now making a revolution on the streets of Iran.

Moreover, the high volume of Iranian calls and messages reflected the restive nature of Iranian society and the desire of the Iranian people for regime change. Iranian regime officials have often complained about the dangers posed by satellite channels, particularly Simaye Azadi.

Sensing the existential threat posed by the MEK, the clerical regime and its pun abroad try to portray the MEK as a fringe grouplet with no popular support. Yet, the high volume of calls, videos, and voice messages from inside Iran and by the MEK’s Resistance Units, once again debunked Tehran’s efforts to tarnish the image of its viable alternative.

“As someone who has witnessed the MEK’s struggle for the past 44 years, I testify that this organization is the Iranian people’s national treasure. They have paved the rough path toward freedom by following selfless leaders,” Kambiz from Germany said.

A plaster worker from Yazd, Central Iran, joined the Simay-e Azadi telethon, saying: “I salute the brave MEK Resistance Units who did a tremendous job during the uprising here in Yazd. I make a 20 million rials contribution, which is my salary for five days.”

Hamid Gharache, who made a collective contribution of $500,000 to INTV, said: “The regime and its pundits, particularly the agents of its the Ministry of Intelligence and Security (MOI), will fail in their efforts to tarnish the MEK’s image and fabricate so-called oppositions.”