For the past four decades the Iranian regime has been using every means it has to somehow demonize the Iranian Resistance movement. To tarnish the image of is viable alternative, the People’s Mojahedin Organization of Iran (PMOI/MEK) and its umbrella coalition National Council of Resistance of Iran (NCRI), the mullahs’ regime has produced hundreds of movies, published thousands of books and article, and hired those expelled from these two organizations to spread rumors and false information under the pretext of “former members” or “critics of the MEK and the NCRI.

In addition, the Iranian regime has a network of so-called “friendly journalists” who misuse their journalistic cover and possibilities to repeat the regime’s allegations against its Resistance movement. Many of these so-called “journalists” have been directly or indirectly hired by the regime’s Ministry of Intelligence and Security (MOIS). Two court rulings against two internationally recognized press organizations, Der Spiegel and the Frankfurter Allgemeine Zeitung who published two articles full of lies and fabrications against the MEK show the depth of the regime’s demonization campaign.

The regime’s demonization campaign against the MEK is one of the main levers of political war of the mullahs’ regime to delegitimize any opposition to the regime. In addition, this dirty campaign paves the way and justifies the murder, torture and imprisonment of supporters and members of the MEK.

Yet, the Iranian regime’s ongoing demonization campaign against the MEK and NCRI shows the regime fear of the Resistance’s potential in leading the struggle for freedom inside and outside Iran. As the late John Adams said: “Facts are stubborn things; and whatever may be our wishes, our inclinations, or the dictates of our passions, they cannot alter the state of facts and evidence.”

Therefore, the more the regime and its agents pursue their disinformation campaign, the more they highlight the importance of this Resistance, because they cannot fight the reality on the ground, which is the effectiveness of the MEK.

In this regard, during the third day of the NCRI’s “Free Iran Global Summit”, Ambassador Adam Ereli, former U.S. Ambassador to Bahrain, said: “The greatest testimony to your effectiveness is the fact that the Iranian regime hates you so much and will stop at nothing to destroy you.” 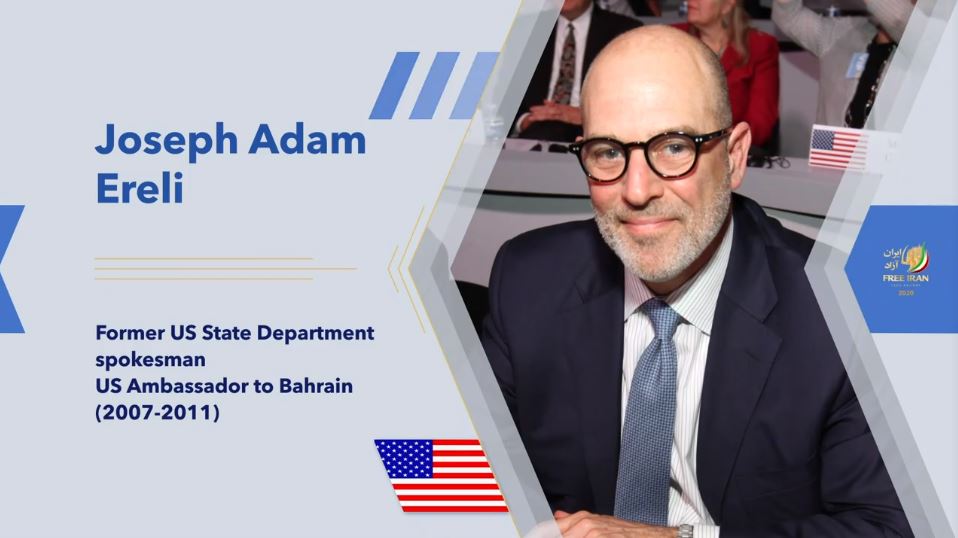 Below is the full text of Ambassador Ereli’s remarks during the conference on July 20, 2020:

I’m only sorry that I can’t be there in person to share this important event with you.  But, you know, it’s so inspiring to see that not even the world’s worst pandemic since 1918 has stopped you from assembling to remind the world that not only is there a organized and strong resistance to the clerical regime that rules Tehran today, but equally importantly, there is a government ready to take over tomorrow.

And you know, obviously, the MEK has done a great deal for the people of Iran and for the world.  But perhaps the greatest testimony to your effectiveness is the fact that the Iranian regime hates you so much and will stop at nothing to destroy you.  And to me, that says—that speaks volumes.  It says that they consider you a threat and, frankly, whatever’s bad for the Iranian regime is good for the rest of the world.

We talked a lot during the proceedings about the Iranian government’s use of embassies abroad, of diplomats, of intelligence, of civilian tools of government to terrorize not only its opponents, but those such as the government of the United States, such as the governments of Europe who support you and, again, that’s, to me, a testimony to the MEK’s effectiveness and to the MEK’s power.  What has accelerated this hostility is in addition to what you were doing outside of Iran, is what is happening inside Iran, and we’ve seen over the past year and a half that the Iranian people are both fed up with the mullahs and are rising up.  And despite all their efforts to stop people from speaking out, to stop people from criticizing the Islamic regime and the principles of the Islamic revolution, the people of Iran, your relatives, are not stopping.  They’re going, they’re stronger than ever, and it doesn’t look like anything can stop them.

Now, as the introducer said, I served as a U.S. diplomat in the Middle East for over 25 years.  And I was the U.S. ambassador to Bahrain, and I can tell you that I saw firsthand what you all know too well, that the Iranian regime has a sophisticated and coordinated plan to spread terror and violence and destabilization throughout the region.  They, you know, they practice what they preach, and the kind of repression and violence that they use against their own people, they use against anybody who disagrees with them, whether they’re Iranian or not.

Now, the MEK and your efforts have been instrumental in exposing this conspiracy of terror by the government of Tehran over many, many years.  And you’ve had, I think, some very important successes in disrupting the Iranian regime’s terrorist activities.  And that’s why, again, not only have they tried to destroy you in Iran, they’ve also tried to discredit and demonize you outside of Iran.  They have funded information campaigns against you.  They have tried to convince journalists, governments, think tanks, that the MEK is an outlaw organization, that it doesn’t represent Iranians, that it has no following inside Iran.  Well, again, the fact that they’re saying this indicates to me that the opposite is true.  Otherwise, they wouldn’t be spending all this money and effort to present a false narrative.

So, where should we go from here?  This is, I think, maybe the fourth or fifth gathering that I’ve been a part of.  And you all have been waging the struggle for a whole lot longer.  And every year we say, “Next year in Tehran.” We’re not there yet.  You’ve heard from a lot of speakers about what remains to be done.  You know,if I were to offer only a couple of suggestions, I’d mention, I’d say, number one, you know, the power of Iran lies in its people.  And the United States and the friends of Iran and the friends of the MEK in Europe and elsewhere need to do everything they can to empower the Iranian people and to support their struggle for freedom and to support opposition movements like the MEK who are really at the, on the frontlines of trying to build a more prosperous and peaceful Iran along the lines of Madame Rajavi’s Ten-Point Plan.  And the second thing I think we need to pay more attention to, and Senator Torricelli spoke to this, I think very eloquently, is we’ve got to focus on countering the propaganda campaign against the MEK, against which you represent, against which you’re doing, because in addition to trying to bomb you or murder you into silence, I think the Iranian regime is trying to out propagandize you.  And what’s important for us to do is to tell the truth about the Iranian opposition, to share what we see in our gatherings such as this and to allow the rest of the world to understand that the Iranian people want something better for their country, and that vision is represented by all of you and by Madame Rajavi and by the great work you are doing.

So, let me conclude by saying congratulations for defying nature and having a gathering of this size to this importance of this significance and impact in the most difficult of circumstances.  It is a reflection of your passion, of your commitment, and of your dedication to what is a very worthy and noble cause.

.@erelija: Iran’s regime has a sophisticated and coordinated plan to spread terror and violence and destabilization in the region. #MEK has been exposing this conspiracy of terror over many years. #ExpelIranDiplomatTerrorists #FreeIran2020 https://t.co/Jiy2ZBgkVa

Previous articleIran: NCRI’s Summit, the Reflection of a Viable Alternative to the Iranian Regime
Next articleCOVID-19 Surging Death Toll Will Amplify Public Hatred Toward Iran Regime and Result in Uprising