Iran’s regime is struggling to retain power, but The Guardian is helping it by disseminating lies against the MEK 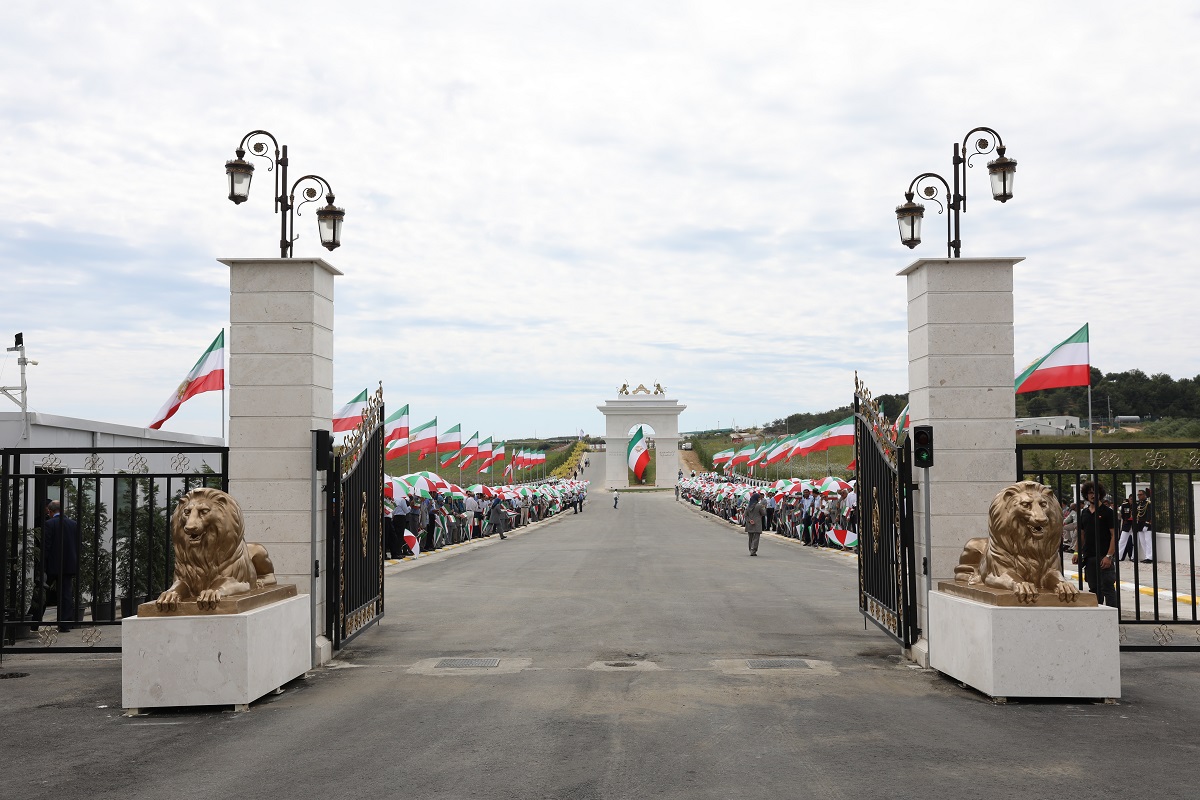 Whenever the mullahs are cornered and are in a deadlock internationally, their defenders rush to the scene to lay the groundwork for policies of appeasement toward the clerical regime. In so doing, they rely on a salvo of lies and assertions that have been proven baseless time and again. But even though the effects of that strategy are short-lived and increasingly futile, the talking points are repeated with greater frequency as the mullahs’ crisis becomes more acute.

The Guardian has repeatedly published articles that are full of lies and biased attacks on the People’s Mojahedin Organization of Iran (PMOI/MEK). They are all comparable to articles churned out by Tehran’s state media.

Ashraf-3, the place of residence for members of PMOI (MEK) in Albania witnessed five days of major international gatherings from July 11 to July 14. Some 350 political dignitaries and parliamentarians from about 50 countries including bipartisan delegations from the US, Canada, Europe, Australia, and the Middle East took part in the meetings in support of the popular uprisings and protests in Iran, which called for regime change and establishment of democracy and human rights. Dozens of journalist from the U.S., Europe and the Middle East were present at Ashraf-3 during these five days and dispatched scores of reports and interviewed many of the residents.

In these circumstances, The Guardian has acted like the mullahs’ life saver and its July 15th article, “Trump allies’ visit throws light on secretive Iranian opposition group,” desperately tried to control the damage that has been inflicted on the mullahs by resorting to all sorts of lies regarding the Iranian Resistance.

Last year, exactly one day after the June 30 event in which some 100,000 people took part in the Resistance’s meeting in Paris, The Guardian rushed to assist the mullahs by defying the international consensus that tens of thousands or 100,000 people took part in the gathering, in favor of the mullahs’ state media, writing that there were only 4,000 participants and that half of them were foreigners.

The Guardian’s despicable conduct reached a crescendo when a 6,500-word article churned out dozens of lies against the PMOI (MEK) while ignoring the responses offered by the PMOI (MEK) and the National Council of Resistance of Iran, as well as the letter by a cross-party group of UK Members of Parliament. These parliamentarians wrote that the article had leveled “one baseless allegation against the PMOI after another, omitting the fact that this disinformation has long been spread by the Iran regime’s Intelligence Ministry (MOIS) and have been debunked on many previous occasions by both the PMOI, independent researchers and parliamentarians in UK and EU, including in letters by the late Lord Slynn, the late Lord Corbett and former Home Secretary, the late Lord Waddington to name a few.”

The main claim of the recent article is that the PMOI (MEK) is a sect that lacks popular support in Iran; an allegation that has been concocted and disseminated by the MOIS.

As evidence, the report relied on remarks attributed to the MOIS agents who introduced themselves as former members of the PMOI. One of these individuals who has been identified by name. Hassan Heyrani was expelled by the PMOI (MEK) on suspicion of having contacts and relations with the clerical regime. Heyrani himself signed the expulsion letter citing “suspicion of intelligence and security and treason.” His intelligence connections leave little doubt about the true origins of critical remarks supposedly coming from this and other, unnamed PMOI (MEK) members.

(Heyrani’s expulsion letter signed by him can be found here)

Subsequent to being expelled from the PMOI, Heyrani put aside all cover and entered officially and overtly into the service of the MOIS. His role is to rehash and repeat brazen lies regarding the PMOI (MEK) for Western audiences.

In order to beguile the readers of The Guardian, the recent article pretends that the participants in Ashraf -3 events were all supporters of President Trump. As such it totally ignores the presence of Senators Joseph Lieberman and Torricelli or the messages of Senators Menendez, Cardin and Congressman Sherman and many others from the US, as well as the presence of cross-party parliamentary delegations from France, Italy, and the UK. This cannot be described as bias. This is a sheer distortion.

It is very telling that some of the lies disseminated by The Guardian, such as that PMOI (MEK) members have no contact with the outside world or lack access to mobile phones, are identical to the lies that Der Spiegel put out on February 16, 2019. This clearly shows the identical sources of these lies. But what is even more telling is that the PMOI (MEK) challenged Der Spiegel’s article in court and the Hamburg Court convicted the outlet and ordered it to remove parts of the article that were challenged by the PMOI.

Regarding the description of the PMOI (MEK) as a sect, Ambassador Lincoln Bloomfield, the former Assistant Secretary of State who has conducted extensive independent investigation on the PMOI (MEK) and the mullahs’ disinformation against them, said in Ashraf 3 on July 13:

“[We hear some say] they are a cult… Really? …They would not be free to speak for themselves… Well, let me tell you what the significance of this place is. I’ve been here for three days now. Like many of my friends, we had a dinner with a hall full of women from the Mujahedeen e-Khalq (PMOI). Only women for one evening. We walked under the stars. We spoke to them personally, privately. We heard amazing stories of courage, of conviction, of pain, of separation, of the choice of a lifetime. These were the actions of people who are stronger than me, who have a major part, who have a mission in life and who have made a choice and they are dedicated to keeping that choice. Ladies and gentlemen, the obscuring curtain has been removed today…Never again should we hear the allegation of cult. It is gone forever. You are free. It’s finished.” (https://www.youtube.com/watch?v=qgOnU2TBlfY)

Regarding the claim that the PMOI (MEK) lacks popular support in Iran, every impartial observer realizes that under the yoke of religious dictatorship ruling Iran, while any reference to the PMOI, is synonymous with long prison terms or even execution, the claim that the PMOI (MEK) “lost a lot of support inside Iran,” lacks any basis and is simply conjured up for a sinister political objective. The continuous public warnings by the most senior officials of the regime regarding the rising popularity of the PMOI (MEK) among the youth in general and the uptick in the activities of the PMOI (MEK) resistance units inside Iran clearly debunks the absurd claim of The Guardian reporter. A journalist for The Express who personally took part in Ashraf-3 events wrote on July 14 that the participants watched videos from inside Iran showing that “young Iranians supporting the PMOI are risking arrest, torture and death by spray-painting messages: ‘Ready, Ready, Ready’ for a new regime.”

The Guardian article was published as the mullahs’ belligerence and havoc in the region was evolving into an urgent international crisis, making a firm policy vis-a vis this regime more imperative than ever.

The Guardian and its ilk, who have put all their eggs in the basket of appeasing the clerical regime for years, witness that this policy is being decimated rapidly. Thus by disseminating such bogus lies against the resistance, they desperately try to imply that there is no viable alternative challenging this savage regime and the international community has no choice but to cave in and to make concessions to the mullahs. But the reality has been repeatedly acknowledged by political dignitaries: more than ever, the PMOI (MEK) have manifested their role to bring about regime change in Iran, while the National Council of Resistance of Iran’s President-elect Maryam Rajavi and her 10-point plan have been established as a viable alternative for the transitional period following the current regime’s ouster.

As the Washington Times reported on July 16, “The PMOI/MEK has been demonized for decades, due to an organized, effective disinformation campaign by Iranian intelligence, and the appeasement of the mullahs by American presidents since the Islamic Revolution during Jimmy Carter’s tour at the White House. In order to get a deal with Iranian ‘moderates,’ which don’t exist, the MEK has been literally thrown under the bus multiple times…. Everything changed last weekend. During a large gathering of politicians and dignitaries from all over the world, who descended onto Camp Ashraf 3 outside of Tirana for multiple days, the spell was broken, and the geographical center of the global resistance to the Iranian murderous regime was birthed and established.”

The mullahs’ massive disinformation campaign and articles such as the one by The Guardian cannot change this reality.