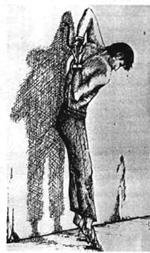 NCRI, October 2 – Horrific accounts of torture in Iranian prisons shocked participants of a meeting in Stockholm organized by the Swedish Red Cross on the occasion of 20th anniversary of foundation of center for the victims of torture.

Mostafa Naderi, a former Iranian political prisoner, explained about the torture he suffered during 12 years of imprisonment:

I was arrested in Tehran in 1981 and taken to Evin Prison simply for selling newspapers.

They blindfolded me and took me to the interrogation room, where they tied me to a bench while on my back. They took out my socks and forced them into my mouth. They then bent my legs from behind and tied them to my thighs. Then, they began flogging me with cables. It was very painful, as the pain began to affect my eyes and head.

They then untied me and told me to walk in order for the swelling to go down so that they could resume flogging.

They did this to several times. Six or seven of us were being interrogated at the same time. There were several others with bleeding feet sitting in the corridor that was about 100 meters long. Some of them had broken shoulders or hands and leg.

Several days later, they again took me to the interrogation room and applied the ghapani torture on me. They handcuffed me, with one hand over my head and the other lower on my back. They then suspended me from the ceiling for 12 hours. This put a lot of pressure on my shoulders.

At the same time, I could see that a female prisoner was being flogged while tied to the bench. She was flogged with cables non-stop for 10 hours. She had been torn to pieces, with her flesh coming off with her clothes. There was a huge pool of blood on the floor. She could not stand the pain and died under torture.

Once I was brought down, my shoulders had turned blue and I could not move my arms. Other prisoners helped me eat. For a month and a half I was kept in the corridor and taken for interrogation and flogged. I suffered kidney hemorrhage. There was a female prisoner who was flogged so much that her legs were completely black below the knees. She was executed later as the mullahs would not release any one crippled or lost a limb under torture.

One day, they called me out to a room and said I was sentenced to death. They told me to write my last will. I was then taken to a room with four other prisoners. We were told that we would be executed the same evening. They blindfolded us and did not give us any lunch or dinner.

At that time, I was reminiscing about my family, wondering how they would react to the news of my execution. Around 3:00 am, they took all of us in a car to an unknown location. Then they tied our hands behind our backs and made us stand in front of a wall. It was a cold evening. I heard rifles being loaded and then heard the sound of gun fire. It was as if I was falling from a height while dreaming. I could not control my body and could not stand on my feet and fell to the ground. I was waiting to die. After a few minutes of silence, I heard the others who were trying to move on the ground. Then I heard the Revolutionary Guards laughing at us. They took us to a room and removed our blindfolds.

We looked at each other. One who wore glasses said he could not see anything, the other one vomited every hour and had blisters on his body and another one developed ulcer. I had blisters on my body and face. All of this happened in one hour. When I saw a physician abroad many years later, he told me that the reaction was due to extremely high pressure during the mock execution.  He said that the pressure had activated the weakest part of your body.

Afterwards, they took me to interrogation room again and continued flogging. Six months later, they took me for a kangaroo trial which only took five minutes to read the indictment. I was blindfolded and could not see anything. They asked whether I accepted the charges and I said no. They began beating me and took me to ward 325. There were 110 people in a room 5 by 6 m. There were three stages for rest. One was standing, next one was sitting and the last stage was to lie down. There was absolutely no room to move.

They fed us one spoon a day and if we asked for more then we were pulled out of our cells and flogged.

… To be continued tomorrow

Previous articleIran: Islam transformed into an instrument for export of terrorism by mullahs – dissident Ayatolla
Next articleIran: Appointment of new Deputy Defense Minister a step towards spread of terrorism