Addressing the issue of Iran in a meeting organized on the fringes of the Labour Party annual conference in Brighton on September 28, Andrew Mackinlay, member of the Foreign Affairs Committee of the British Parliament emphasized, among other things, the need to remove the People’s Mojahedin Organisation of Iran, a member of the NCRI coalition, from the British and the EU list of proscribed organizations. Excerpts of his speech follows: 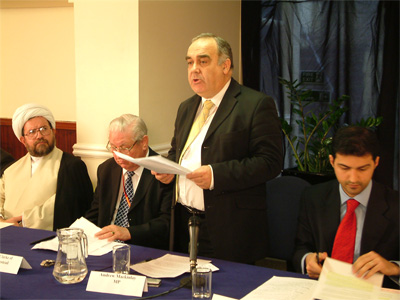 Addressing the issue of Iran in a meeting organized on the fringes of the Labour Party annual conference in Brighton on September 28, Andrew Mackinlay, member of the Foreign Affairs Committee of the British Parliament emphasized, among other things, the need to remove the People’s Mojahedin Organisation of Iran, a member of the NCRI coalition, from the British and the EU list of proscribed organizations. Excerpts of his speech follows:

Many of us who are pre-occupied with the calls of freedom in Iran find ourselves trying to persuade the British government to find that narrow course between the possible belligerence of the Bush regime and the appeasement and weakness of the EU. And in our view we believe that the best way forward for humankind in relation to Iran and that fragile and troubled region is to follow the example of the NCRI who say we do not want any invasion.

All we seek is the capacity, those of us in exile, to argue for and defend the case of individuals who are suffering persecution in Iran, to plan, to prepare and dream of the day when together with the people in exile and the people in Iran we can plan and prepare for our own democratic institutions and the restoration of parliamentary democracy in Iran.

I believe and I know this is the view of all my fellow colleague parliamentarians is that we need to get the British government to acknowledge that the NCRI under the very great leadership of madam Rajavi can show a way forward. We should extent to that organisation friendship and support and a status which we should always extend to people who are trying to promote freedom in exile and in the face of persecution.

We remind the British government how often in the dark days 60 years ago there
was confused thinking in London as to whether or not they should extend their
hand of friendship to General Charles du Gaulle. Wise council prevailed. He did represent France in exile, French democracy in exile and we say that there are some parallels today when we are dealing with both, both the NCRI and PMOI.

We want to extend a special greeting to people in Camp Ashraf because we also want to use this occasion to remind the British governemtn their moral obligation to stand by and demand that the protected persons’ status should continue and endure in respect of people in camp Ashraf.

We are also concerned with the implications of some aspects of the draft Iraqi constitution. We do not want any facility, any excuse for the Iran regime to be able to prevail upon the Iraq government to put into further exile or more seriously extradite
to Iran those people who are under UN protection in camp Ashraf. And we look upon the British government to reaffirm its intention to ensure that these people are protected and it is against the fact that we do believe that increasingly the Iranian government seems to be able to pull strings in Iraq. I think this is worrying not only in the sense of the very fragile democracy which we all like to see built up in Iraq but also in terms of the peace of the region.

So it does seem to me that the traffic light is showing an amber light to the British government but they need to, both in terms of good policy to say that the people in Camp Ashraf are protected but they also need to bear in mind that there is growing evidence of which we have warned in the past of Iran trying to export terrorism to Iraq, to facilitate the arming of irregulars

The other evidence which we think that the British government should now accept that the Iran regime is providing killer weapons to irregulars in Iraq including infrared technology which can destroy both security service vehicles of the Iraq forces and the coalition.

So it does seem to me that the EU3 have been very weak and they must stiffen their sinews and send a signal to the Iran government that we will not accrues by our silence
in their extending and exporting terrorism. That we can no longer ignore the
persecution that goes on in Iran, the executions, the assassinations, the imprisonment of people who are fighting for freedom and others who are denied the rules of natural justice in the court system of that country.

I think also we use this occasion to urge the UK to persuade others that the UN Security Council must now seriously address the frequent and blatant disregard by Iran of its obligations to the IAEA. And unless there is a serious effort by the International community through the auspices of the UN to send unequivocal criticism to the Iran government, there will be the encouragement to that regime to then go on to develop an
atomic weapon and other weapons of mass destruction and continue their exporting of
terrorism worldwide.

Time is short. Regrettably this bold action should have been done not months ago but years ago. The UN needs to address this matter with some urgency.

Now colleagues, time is short but I think this occasion does allow us to say that we are growing in our numbers in the British parliament, right across the political spectrum. We have some tremendous parliamentarians from the left and from the right, from the conservative party, the Lib Dem party and my own labour party who are resolved to stand by the people of Iran, who seek to persuade this government to be much more robust, not to appease the tyranny of the Iranian regime.

We also are seeking to persuade the UK government to recognise that the People’s Mojahedin should not be on the so called terrorist list. It is unfair, it is affront and it is on top of a number of arbitrary indignities and irritations which are extended to both those people who are bravely organising for Iranian democracy.

I know it is the hope of the parliamentarians here today and others in the political life of the UK and significant jurists that we should seek to persuade our home secretary Charles Clarke to lift this affront, the tag of terrorism on people who are trying to organise for
their own country’s deliverance from tyranny.

So I conclude by saying this, take heart whether you are in London, elsewhere around the world, among the Iranian, Diaspora, in Camp Ashraf or in Iran the day of deliverance is
coming and there are brave men and women who joined us this morning who we salute and feel sure that one day they will be able to return to Iran and promote parliamentary democracy. That is our dream and the day of deliverance is coming.