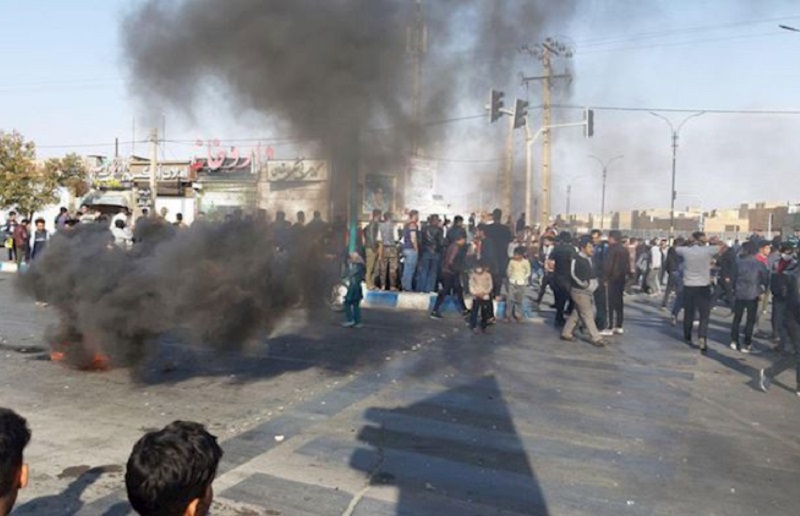 Iran Uprising
November 21, 2019
• As we move into the ’s rebellious youths, resistance units, &all the Mojahedin &freedom fighters are proud of having done so. at shutdown hour 113, along with reports that some users have come online; real-time network data show national connectivity up slightly to 8%; unclear if restoration will be sustained ? Report: Day 7 of – via the ’s Network: , I urge the UN Secretary General to call for an emergency meeting of the UN Security Council to brief them about the crimes of Khamenei and his Revolutionary Guards (IRGC) in Tehran. pic.twitter.com/qW28xyH9qD

• The regime continued a near-total Internet blackout of the whole country. Reports indicate that almost all network access, except for some regime agencies, has been disrupted by order of the regime.
• A report on the state of protests at 8:10 PM CET on Wednesday, November 20, 2019:
o Insurgent youth in Pakdasht and Varameen (south of Tehran) have established roadblocks to confront the regime’s security forces.
o In the city of Gorgan, northern Iran, the protesters are clashing with the regime’s security forces.
o In Tehran, Piroozi Avenue, defiant youth are clashing with the regime’s security forces.
o On Wednesday morning, rebellious youth torched the regime’s Bank Meli.
o The nationwide protests have now spread to over 144 cities.
o Reports indicate more than 3500 people have been so far injured during the nationwide uprising in Iran.
o It is reported that the southern Tehran suburb of Islamshar’s police station has been overrun by protesters.
o An Iranian citizen said: “My friend told me there is a martial law at Quds town. On Tuesday they also captured the police station.”
o A Report from Malard indicates that no banks are left in Malard, not even an ATM machine. All the state buildings are destroyed.
o A report from Islamshahr indicates: “On Tuesday midnight, a branch of the Bank Meli was torched by the protestors. The security and the IRGC forces didn’t dare to approach the people. People are staying on the streets despite the cold weather and rain. In the cities of Pakdasht and Varamin, people have created roadblocks. We can’t continue with this internet it constantly stops working.”