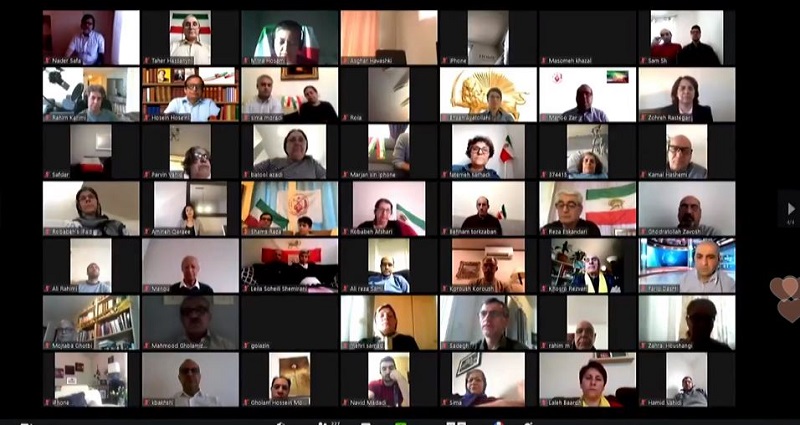 Participants: Mullahs are hiding the real scope of Coronavirus pandemic in Iran, not allocating resources to save people’s lives, trying to exploit the crisis to get sanctions relief

In a unique online conference, Iranians residing in Nordic countries, from 235 locations said that there was growing evidence that the ruling theocracy was engaged in a major campaign to cover up the actual scope of the coronavirus pandemic the number of fatalities in Iran.

They pointed out that while according to official figures, 4357 Iranians have lost their lives, the National Council of Resistance of Iran, based on reports by the network of the People’s Mojahedin Organization of Iran (PMOI/MEK) announced that at least 25,000 had died as a result of Covid-19.

During the two hours long conference, ex-pats including several physicians and experts in the medical field, who are in constant contact with their relatives and colleagues at home, stressed that the clerical regime has the resources to combat coronavirus but is refraining to use them for saving the lives of Iranians and solely concerned with protecting the IRGC. It is exploiting the crisis to seek sanctions relief. They underscored that the regime’s policy of sending people back to work is tantamount to a massacre of Iranians and vividly illustrated that the regime’s priority is to maintain its grip on power.

The participants took note that rebellious Kurdish political prisoner Mostafa Salimi, imprisoned for 17 years, was hanged in Saqqez Prison this morning. Salimi was arrested in 2003 and sentenced to 15 years in prison and execution. He escaped during the Saqqez prison rebellion on March 27, 2020, to protect himself from Coronavirus along with a large number of other prisoners. He was arrested a few days later and was hanged this morning.

Giulio Terzi, the former Minister of Foreign Affairs of Italy said the Iranian regime us the coronavirus crisis to create a biological weapon of mass destruction. He reiterated the point made by Mrs. Maryam Rajavi, the President-elect of the National Council of Resistance of Iran, that not everybody understands that the bigger problem for the people of Iran is the regime itself.

#Italy‘s Ex Minister of Foreign Affairs, @GiulioTerzi says the Iranian gov. has created a biological weapon of mass destruction from #coronavirus in Iran.
He quotes from @Maryam_Rajavi that not everybody understands that the bigger problem of the people is the regime itself. pic.twitter.com/5UqfDXw1vs

Ex minister of trade @KimmoSasi & member of Parliament from #Finland stands with the Iranian Opp leader to call for release of all prisoners in #Iran to save them from #coronavirus
Most important Human Rights is the right to life but prisons are extremely in bad situation. pic.twitter.com/7Z2TA6P8sr

According to Gunar Hogmark, a former member of the Parliament of Sweden, dictators deal with bad news through cover-ups and lies and punish those who try to get the truth out about coronavirus. The Iranian regime is a prime example.

Former #Swedish MP @ghokmark:
Dictators hate, fear the truth.
It’s not a coincidence that #COVIDー19 emerged in china.
It’s a dictators way of dealing with bad news, covering and lying and punishing those who try for truth of #coronavirus like in Iran. pic.twitter.com/fyBV8fXj6x

Alejo Vidal-Quadras, former Vice-President of European Parliament and President of a Prominent European NGO, “In Search of Justice” (ISJ), underscored that it is incredible that Iran’s regime pretends it has the COVID 19 crises under control, while it’s very evident that it is covering up the reality so to hide its failure of approach and actions to deal with the crisis.

Ex Vice-president of the European Parliament & President of ISJ explains, it is incredible that #Iran‘s regime pretends it has #COVIDー19 crises under control.
It’s evident regime is covering up reality so to hide its failure of controlling #CoronavirusOutbreak pic.twitter.com/vSv4PCIieG

According to Struan Stevenson, a former MEP and chairman of the ISJ (committee on protection of political freedoms in Iran) from Scotland, condemned the regime’s decision to send people back to work and kids to school while coronavirus was still spreading. He stressed that the Iranian regime should not be funded by the international community since the funds will be used for the regime’s nefarious policy and to the detriment of the Iranian people.

Former MEP & currently chairman of the ISJ (committee on protection of political freedoms in Iran) from #Scotland @STRUANSTEVENSON condemns the regime of #Iran‘s decision to send people back to work, kids to school while #coronavirus spreads.
Iranian gov. should not be funded! pic.twitter.com/ZUoTsPrI9A

Lars Rise, a former Parliamentarian in Norway’s Foreign affairs Committee, stressed the priority of doing the right thing by the people. The Iranian regime is doing exactly the opposite.

Ex Parliamentarian of #Norway‘s Foreign affairs Committee@larsrise remarks the priority of doing the right thing by the people and not calculating other interests.#coronavirus death closes to 25k Iranians, making it among top countries in the world with most Ppl per capita pic.twitter.com/ysm6SDyNwZ

Mehdi Abrichamchi, the Chair of the Peace Committee of the NCRI, explained that in dealing with the Coronavirus, the mullahs’ regime is an exception because “from the first day, then it tried to conceal the information about coronavirus’s entry into Iran, and then tried to hide its dimensions from the Iranian people and the world with misleading and false information. Iran is the only country in the world where it is a crime to provide non-governmental information about Coronavirus, and so far, many people who have tried to make the actual figure public, have been arrested as rumormongers. The president of this regime falsely declares that Iranian hospitals have many empty beds for accepting patients, which was immediately denied by the doctors and lower officials of the government. In this situation, the regime expelled Doctors Without Borders, who had gone to help because it fears the revelation of the reality of the situation in Iran.

“In their most heinous criminal act, Khamenei and Rouhani have decided to resume normal business in all provinces from today, and so the same next Saturday in Tehran, while quarantining and prevention of extensive social contacts is one of the most well-known basis of confronting the coronavirus today.

Mehdi Abrishamchi, Chairman of Peace Commission at @iran_policy and he talks of Mostafa Salimi, a Kurdish political prisoner who was executed by the clerical regime in #Iran after trying to escape prisoned to protect himself of #coronavirus infection. pic.twitter.com/FvOQTnqsVE

“The mullahs’ way of dealing with Coronavirus is a continuation of their 40-year of jeopardizing the lives of the Iranian people and pilfering their properties.

“From the day Ruhollah Khomeini called the war a divine blessing, killing one million young people and, according to the regime’s leaders, sent tens of thousands of children to the frontline and minefields, until the MEK forced him to drink the chalice of the poison of ceasefire, he massacred political prisoners to prevent an uprising. …For the mullahs, the lives of the people have no value.

The mullahs’ concern is their own regime and the threat they face from the people. The mullahs are not on the same side with the people against Coronavirus; they are on the side of Coronavirus against the people….we must all expose the mullahs domestically and internationally, and mobilize the world to help of the people,” Abrichamchi added.