Iranians Abroad: Another Week of Protests and Activism in Europe 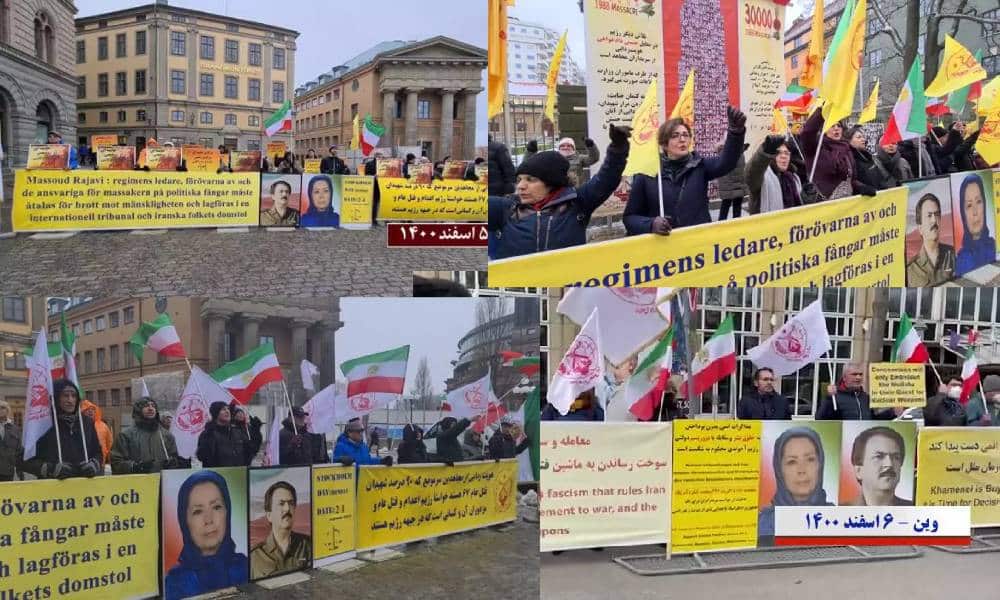 On Saturday, February 26, Iranians and supporters of the Iranian Resistance gathered in Malmo and Gothenburg in Sweden, to support the protesting teachers in Iran and call for a trial of the Iranian regime’s president, Ebrahim Raisi, for his role in executing their fellow countrymen and women in the last four decades.

On Friday, February 25, Vienna, the capital of Austria was witness to a demonstration by Iranians and supporters of the Iranian Resistance who called on world leaders to stop offering concessions to a regime that thirsts for nuclear weapons and consists of mass executioners and terrorists.

On Thursday, February 24, Iranians and relatives of the martyrs of the 1988 massacre in Iran, staged a demonstration in front of a Stockholm courthouse, demanding the trial of the regime’s Supreme Leader Ali Khamenei, president Ebrahim Raeisi, and Chief Justice Gholam-Hossein Mohseni-Ejei for genocide and crimes against humanity.

On the same day, while world powers were trying to negotiate with the Iranian regime in Vienna, Iranians and supporters of the Iranian Resistance staged a demonstration, condemning any eventual deal that would embolden the religious fascism in Tehran that uses bombings, terrorism, and incitement to war for its very survival.

On Wednesday, February 23, while Hamid Noury, a former prison guard, and a perpetrator during the 1988 massacre of political prisoners, was tried in the court of Stockholm, supporters of the Iranian Resistance and relatives of the martyrs marched in front of the court, demanding the trial of the Iranian regime’s officials for genocide and crimes against humanity.

Iranians and supporters of the Iranian Resistance held a demonstration in Vienna on February 22, denouncing the criminal clerical regime and its nuclear program. The protestors shouted slogans against the Iranian regime’s officials and called for the overthrow of the dictatorship that has brought poverty and destruction to the country in order to fund its own illicit ambitions.

On February 21, Iranian patriots in Vienna held a rally against Tehran’s nuclear program and denounced the alleged talks that intends to pave the way for more concessions to the murderous regime that has been seeking weapons of mass destruction for four decades.

On Monday, February 21, while Hamid Noury was being tried in the court, Stockholm was also hosting a demonstration of Iranians and relatives of slain political prisoners in Iran who demanded justice for their loved ones.